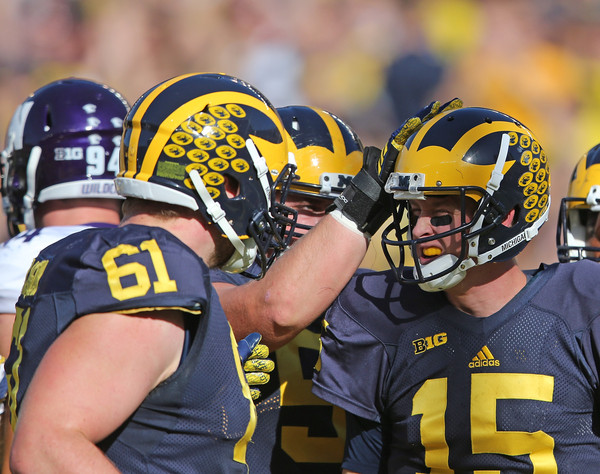 The sixth week of the college football team saw all 14 Big Ten teams playing in conference clashes. Some teams performed well while others did not. Let’s take a look at each game.

Ohio State may be the top-ranked team, but they have not played like the team we saw last year.

Cardale Jones started the game, but J.T. Barrett saw plenty of action as well. The offense had a pretty good performance overall with almost 500 yards, but the defense gave up 21 points to a previously hapless Maryland offense.

For Maryland, they opted to go with Perry Hills and it appears to have paid early dividends even if they still lost by 3 touchdowns. The key here is the offense found something that was not there previously. Hills was a terrible 10 of 27 for 133 yards with a touchdown and 2 interceptions but was a menace running the ball. He had 25 carries for 170 yards and 2 touchdowns to give the Buckeyes fits.

Ohio State gave up 386 total yards and allowed 6 of 16 on third and fourth down conversions. They struggled early against a team that also had their coach relieved earlier this week. It is a troubling pattern for a team that is ranked number one.

Iowa’s offense looked better at home one week after struggling on the road at Wisconsin. This week was against Illinois.

C.J. Beathard went a paltry 15 of 31 through the air but had 200 yards and 2 touchdowns in a secondary performance to the running back. Jordan Canzeri ran wild for Iowa on offense with 256 yards and a touchdown on 43 carries. Jerminic Smith had a big game with 4 catches for 118 yards including a few nice grabs. The offense had 478 yards of total offense with no turnovers.

One of the only knocks on the offense was they ended up settling for 3 field goals with all three converted by Marshall Koehn. Koehn did miss an extra point early in the game that nearly had consequences late in the fourth quarter, but was good outside of that miss. Another knock was that they converted just 4 of 16 third downs.

Illinois seemed to have trouble finding consistency in the first half with only 7 points that came on their second drive. Part of the issue may have been due to the absence of Josh Ferguson, who missed the game due to a shoulder injury. Illinois’ touchdown drive went for 67 yards while their other six drives totaled 49 yards combined.

Illinois will need to be better on defense as noted by the 256 rushing yards allowed to Canzeri. They will also need to force more turnovers to give their offense a chance to build a lead.

Illinois (4-2, 1-1) has a bye next week and will face Wisconsin at home on October 24. Iowa (6-0, 2-0) plays Northwestern on the road next week with a chance to put a hammerlock on the Big Ten West division with a win.

Indiana struggled on offense this week while Penn State was decent on offense and very good on defense to lead them to yet another win.

Zander Diamont got the start with Nate Sudfeld out. He suffered an injury of his own in the third quarter and was replaced by Danny Cameron. Diamont led Indiana to a touchdown early, but the offense did not do much after that. Diamont finished the game going 9 of 17 for 90 yards passing as well as 11 rushes for 38 yards and a touchdown.

Cameron was 6 of 16 with 65 yards and an interception. Devine Redding had 13 carries for 32 yards with Jordan Howard not playing. It was not pretty for Indiana outside their touchdown drive. For the game, Indiana went 3 of 16 on third down and finished with 234 yards of total offense.

The Nittany Lions continued to be without their top two rushers. Nick Scott got 8 carries for 57 yards while Mark Allen also had 8 carries and 45 yards. Penn State had 420 yards of total offense and held a nearly 36-24 minute lead in time of possession.

Penn State’s defense was led by Carl Nassib, who had two forced fumbles and two sacks. The entire defense had a very good game and continue to look good.

Indiana (4-2, 0-2) will face Rutgers at home hoping to see Nate Sudfeld and Jordan Howard play. Penn State (5-1, 2-0) has a big test on the road at the Horseshoe against Ohio State.

Michigan continued their incredible defensive streak by posting a third straight shut out. All phases of the game got in on the act as well.

Jake Rudock had a quiet, but efficient game going 17 of 23 for 179 yards. De’Veon Smith had 8 carries for 59 yards while Derrick Green had 47 yards and a touchdown on 12 rushes. The offense finished with 380 yards of offense and went 7 of 14 on third downs. Northwestern had only allowed 35 points in the first five games prior to this contest.

The Michigan defense was superb. Justin Jackson had only 25 yards on 12 carries. Clayton Thorson went 13 of 27 for 106 yards with an interception. Northwestern totaled 168 yards of offense and went a putrid 2 of 13 on third downs. A lot of that is due to the Michigan defense, which got a pick-six from Jourdan Lewis, who ripped the ball out of the receiver’s arms and sprinted down the sideline for a 37-yard return.

Michigan’s special teams started the day with a 96-yard kickoff return by Jehu Chesson and it was all Wolverines after that.

Northwestern (5-1, 1-1) faces Iowa next week at home in a massive Big Ten West game. Michigan will take on Michigan State at home next week in a huge game of their own.

Stop if you have heard this one before: Nebraska lost a heartbreaker. It was their fourth loss of the season, all in close fashion.

Wisconsin had a tough time getting their running game involved early on. It was not until the fourth quarter when the Badgers were able to run the ball. Dare Ogunbowale finished with 18 carries for 117 yards while Taiwan Deal managed just 4 carries for 8 yards and left early due to an ankle injury. Alec Ingold was the third-string running back and finished with 14 yards and a touchdown on 8 carries.

Joel Stave went to the air quite a bit due to the poor rushing attack. He went 24 of 50 for 322 yards with a touchdown. He found two of his favorite targets in Alex Erickson (7 catches for 113 yards) and Robert Wheelwright (5 catches for 81 yards). With Austin Traylor out at tight end, Troy Fumagalli stepped up to finish with 6 catches for 60 yards and a touchdown. The offense struggled on third down again going just 5 of 16 but racked up 469 yards of offense.

Nebraska has issues moving the ball at times against Wisconsin. Tommy Armstrong went 11 of 28 for 129 yards and a touchdown through the air but was dangerous running the ball with 50 yards and a touchdown on 8 carries. Andy Janovich and Terrell Newby both had 59 yards rushing while Janovich had a nice 55-yard touchdown run in the fourth quarter to give the Huskers a slim lead. Nebraska had 325 yards of offense and went 8 of 18 on third downs.

The defenses were both solid for much of the game. In the fourth quarter, the offenses came to life to provide an excellent game. Wisconsin was lucky to get the win thanks to Rafael Gaglianone, but he went 3 of 5. Nebraska kicker Drew Brown missed his only field goal attempt in another play that could be looked back on as a what-if moment.

A potentially dangerous game for Minnesota turned into a rout with a big 28 point third quarter for the Gophers.

Minnesota’s passing game was hardly featured, but it was not needed often. Mitch Leidner went 8 for 12 for 59 yards with 2 touchdowns and an interception. Brandon Lingen caught both of those touchdowns and had 3 catches for 22 yards total. Shannon Brooks had a great game rushing with 176 yards and a touchdown on 17 carries while Rodney Smith had 52 yards on 13 carries. The Gophers ran for 326 yards and 2 touchdowns on 48 carries as a team.

Purdue struggled on offense. David Blough went 21 of 49 for 207 with a touchdown, but also threw 3 interceptions. D.J. Knox had 13 carries for 60 yards and a touchdown with Purdue managing just 275 yards of total offense. One of the interceptions was returned for a touchdown by Minnesota’s Jalen Myrick. Purdue went 3 of 17 on third down and the turnovers hurt them immensely.

Minnesota (4-2, 1-1) faces Nebraska next week at home. Purdue (1-5, 0-2) has the tough task of going into Madison and playing Wisconsin next weekend.

Michigan State was able to escape their road game at Rutgers thanks to a blunder by the Scarlet Knights on a night that featured both quarterbacks.

Connor Cook had a good game going 23 of 38 for 357 yards with 2 touchdowns and an interception. His top target once again was Aaron Burbridge, who had 9 catches for 146 yards. The Spartans struggled to run the ball at times with LJ Scott led the team with 9 carries for 42 yards and 2 scores.

Michigan State seemed as if they had no trouble converting on third down and they finished 11 of 17 on that important down. Rutgers was led by Chris Laviano going 15 of 24 for 208 yards and 3 touchdowns, but most importantly did not throw an interception. Leonte Carroo had his second three-touchdown receiving game of the year with 7 catches for 134 yards and 3 scores. Paul James had only 2 carries, but that was good enough for 74 yards thanks to his long 72-yard run. Robert Martin had 61 yards on 13 carries as well.

Rutgers was the opposite going 3 of 12 on third down and 2 of 3 on fourth down. Neither defense played terribly, but neither was outstanding. Laviano spiked the ball with seconds remaining on fourth down after a sack, which caused Rutgers to lose. It was fourth and 20 at midfield so the chances were not great, but it became zero with the spike.

Check back next Sunday for the Week 7 edition of the Big Ten Roundup.