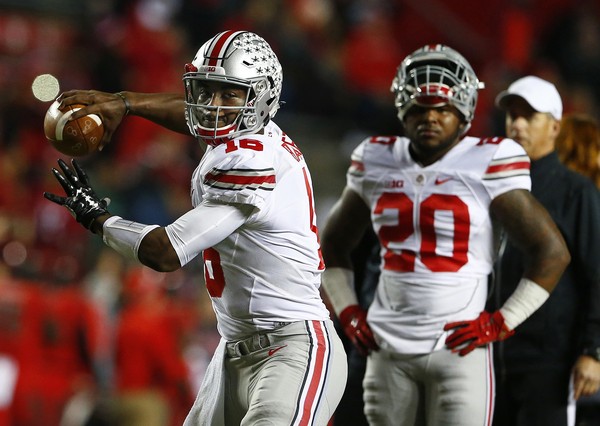 There were five Big Ten Conference games in Week 8 with Michigan, Iowa, Purdue, and Minnesota all on a bye week. Below is a look at each game.

Northwestern’s offense came to life against Nebraska, but their defense continued to struggle. Meanwhile, Nebraska lost another close game to drop them to 3-5 on the year.

The offense had 333 yards total and went 5 of 13 on third down. Nick VanHoose had a 72 yard interception returned for a touchdown midway through the second quarter to give Northwestern a 14-5 lead, but the defense had their issues in the second half giving up 16 points.

Tommy Armstrong had an inaccurate game going 24 of 49 for 291 yards with a touchdown and an interception. He also ran for two touchdowns while Terrell Newby led the team with 52 yards on 16 carries. Jordan Westerkamp had 5 catches for 92 yards while Brandon Reilly caught 4 passes for 83 yards and a touchdown. The Huskers finished with 373 yards of offense and were 9 of 20 on third down. They also held the ball for almost 39 minutes compared to 21 for Northwestern.

Northwestern (6-2, 2-2) has reached bowl eligibility for the first time since 2012. They face Penn State on November 7 after a bye next week.

Stave went 3 of 7 for 49 yards, but was knocked out due to a head injury. He was replaced by Bart Houston, who did well at times, but also made some poor throws. Houston went 22 of 33 for 232 yards with 2 touchdowns, but also threw two picks. Those two interceptions were thrown in the end zone taking the chance for more points away. The offense finished 9 of 16 on third down, but racked up 419 yards.

Alex Erickson, normally the leading receiver, led the team in rushing with 81 yards on 4 carries. Dare Ogunbowale had 16 carries for 42 yards while Alec Ingold had the lone rushing touchdown to go along with 26 yards on the ground. Erickson did lead the team in receiving as well with 10 catches for 96 yards and a touchdown. He was a big target for Houston to move the chains with Ogunbowale catching 5 passes for 63 yards. Troy Fumagalli had 5 catches for 52 yards while Robert Wheelwright had 3 catches for 47 yards and a touchdown that was pure determination on his part.

Illinois was stymied at times on offense with Wes Lunt going 22 of 43 for 278 yards with no touchdowns and an interception. Ke’Shawn Vaughn was the only player to record a carry with 13 attempts for 55 yards and a touchdown. Geronimo Allison had 8 catches for 99 yards while Malik Turner caught 4 passes for 80 yards. Illinois finished with 333 yards on offense, but managed just 3 of 12 on third down conversions and also went 0 for 2 on fourth down.

Wisconsin (6-2, 3-1) will go back home to face Rutgers next week with an uncertain situation at quarterback. Even if Stave cannot play, Houston looked capable of picking up the slack while the defense will probably be its usual stout self.

Illinois (4-3, 1-2) still sits two games from bowl eligibility and next week’s road contest at Penn State will not be easy.

Penn State’s offense came to the rescue this week to secure a big 31-30 road win over Maryland.

Christian Hackenberg went only 13 of 29, but threw for 315 yards with 3 touchdowns and no interceptions. He found Chris Godwin 4 times for 135 yards and a touchdown while also hitting DaeSean Hamilton with 5 catches for 96 yards and a touchdown. Saquon Barkley was not as effective this week with 65 yards and a touchdown on 20 carries. Penn State was an awful 3 for 12 on third down including a terrible third down throw in the final 90 seconds clinging to a one point lead. They finished with 363 yards of offense despite having the ball only 24 minutes.

Perry Hills went 19 of 28 for Maryland with 225 yards, a touchdown, and three interceptions. He also had a nice game on the ground with 26 carries for 128 yards and a touchdown. He was giving the Penn State defense fits throughout the entire game. Levern Jacobs led the team with 5 catches for 93 yards and Malcolm Culmer had 3 catches for 65 yards. Maryland was barely better than Penn State on third down with a 4 of 13 tally. The Terps finished with 470 yards of offense, but will rue the fact they settled for 4 field goals (converted 3 of them) and had 5 turnovers that yielded a touchdown, but also caused them to miss out on potential points on three occasions.

The final score of this game is far from indicative of how close this contest was until late in the fourth quarter. Indiana kept it close, but the Spartans pulled away late.

Indiana (4-4, 0-4) still need two wins to reach bowl eligibility after losing four games in a row. They have a bye next week before taking on Iowa at home on November 7.

Ohio State looked well oiled on offense with JT Barrett behind center as they crushed Rutgers on the road.

Rutgers struggled for much of the night with Chris Laviano going 10 of 20 for 117 yards and an interception. Hayden Rettig went 3 of 7 for 72 yards and a touchdown in garbage time to give Rutgers their only points. Paul James ran for 56 yards on 10 carries while Robert Martin had 6 rushes for 43 yards. Carlton Agudosi had 2 catches for 76 yards and Leonte Carroo had 3 grabs for 55 yards.

Rutgers finished the game with 293 yards of offense and went 5 of 15 on third down. They managed just 12 first downs for the game.

Check back next Sunday for a recap of the ninth week of Big Ten action.