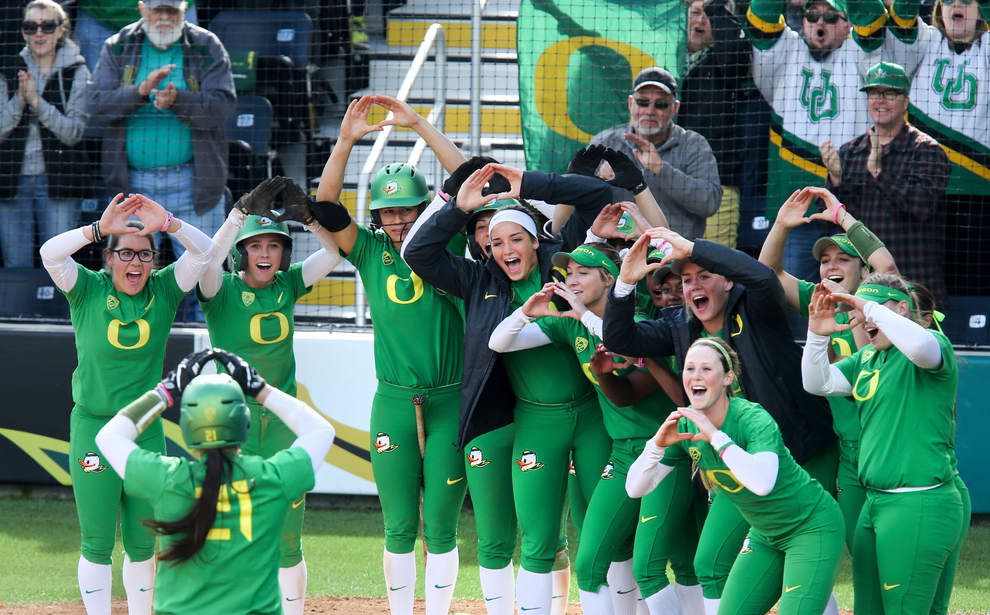 The 2017 college softball regular season is over for most teams across the country following week thirteen. There were some big games and upsets among the top teams in our final regular-season power rankings. We take a look at the top 16 teams in our power rankings as well as the next four teams.

We will start by providing last week’s rankings below. Please note the records in the table below are as of May 2.

Below is the ninth edition of our 2017 power rankings. Please note the records listed are through games as of May 9.

Florida (#1 last week) went 4-1 with the week beginning with a loss to Florida State. The Gators had their best ace in the circle with Kelly Barnhill, but despite the 21 strikeouts, they lost 3-1 in 11 innings. Florida finished the week going 4-0 over North Texas and Florida A&M by a combined score of 32-1 with only 13 hits allowed. The Gators will play in the SEC Tournament this week as the top seed.

Oklahoma (#3 last week) went 3-0 with a sweep of Oklahoma State in which they allowed only one run during the series. The series ended with a combined no-hitter from Nicole Mendes and Paige Lowary. The Sooners are playing their best ball of the season right now and they will be the top team in the Big 12 softball tournament.

Oregon (#8 last week) makes a big move up after sweeping Florida State at home. Game one was an 11-0 final as seven different Ducks recorded an RBI and Megan Kleist allowed only two hits. Game two was a Maggie Balint three-hitter with the Ducks scoring three sixth-inning runs to win 3-1. The finale was tight throughout as FSU took a 1-0 lead in the second and Oregon tied it in the fifth. The bottom of the ninth saw Danica Mercado’s lead off double turn into the game-winning run as Gwen Svekis hit a sacrifice fly to walk off for the win.

Oregon looked fantastic in sweeping the Seminoles and have the look of a national title contender. They have one final series at Stanford to close out the regular season.

Minnesota (#4 last week) had a great week going 3-0 over Penn State en route to capturing the Big 10 regular-season title. The Gophers won each game by at least 9 runs and by a combined score of 35-3. Sara Groenewegen threw one-hitters in the first and third games as the Gopher pitching staff allowed six hits over the three games. The Big 10 conference tournament is on deck for Minnesota.

Florida State (#5 last week) went 1-3 this week, but they took on a couple of the top teams in the nation. They won the midweek game at home to Florida 3-1 in nine innings. They overcame 21 strikeouts from Kelly Barnhill as the walk-off home run was hit by Alex Powers.

The road trip to Eugene was not very successful as they were swept by Oregon. They were completely dominated in the opener losing 11-0 but were much more competitive in the final two losing 3-1 and 2-1 with the latter coming via walk off. It is hard to fault the Seminoles for taking on a tough schedule and their win over Florida keeps them here. They will be playing in the ACC Tournament this week as the top team.

Arizona (#2 last week) finished the season going 1-2 against UCLA in a three-game set. Despite the series loss, the Wildcats won the Pac-12 Regular Season title and the Pac-12 automatic bid to the NCAA Tournament. Arizona was shut out twice to open the series before roaring back to win the finale 7-2 with four first-inning runs.

The Wildcats do not have a series this weekend as they await finding out their national seed for the tournament. Arizona will undoubtedly be a top 8 team, which guarantees them hosting both a Regional and Super Regional should they get past the first round.

Tennessee (#9 last week) played a three-game series at Texas A&M and came away with two wins. The Vols did not get much going in a 5-1 loss to open the series but came alive on offense scoring 8 runs in each of the final two games. Six different Vols recorded an RBI in game two while Meghan Gregg had 5 RBIs in the third game. Tennessee is a dangerous team going into postseason play, which begins this week for the Vols with the SEC Tournament.

UCLA (#12 last week) took two of three from Arizona at home. It was an impressive first two games as they shut out the Wildcats and allowed seven hits over the two games. They did not fare so well in the third game losing 7-2, but they had already taken the series.

UCLA continues to be one of the most enigmatic teams this season. They have won the first two games of three-game series versus Washington, Oregon, and Arizona, but also have a series loss to Oregon State. There is no doubt UCLA is talented enough to beat any team when their hitting and pitching is on at the same time, it is just a matter of if those two happen at the same time. The Bruins are at Arizona State this weekend for one final series.

Texas A&M (#6 last week) dropped two of three against Tennessee at home. They started well with a 5-1 win before the pitching gave up 16 runs on 22 hits over the final two games. The Aggies have hit a bit of a rough patch losing four of their last six going into the SEC Tournament.

Washington (#7 last week) had a 3-1 week winning over Seattle on Wednesday and taking two of three from Stanford at home. The Huskies were in a battle in game one against Stanford, taking it 1-0 on a walk-off home run from Kirstyn Thomas. Game two was the same for Washington in the fact they had a tough time scoring. They were one hit in a 6-0 loss before bouncing back to win 10-2 in game three.

It is a bit odd that the Huskies struggled with Stanford, a team that had only one Pac-12 win coming into this series. They have another tough opponent in Utah this weekend to end the regular season.

Auburn (#11 last week) went into rival Alabama’s place and took two of three. It was their first series win in Tuscaloosa in program history. Each game was tightly contested as they needed 9 innings to win the opening game 3-0 and then won 4-1 in the second game behind Alyssa Rivera’s three-run double. The Tigers had their chances to sweep Alabama in the final game as they loaded the bases in both of the first two innings, but came away empty. Haley Fagan hit two solo home runs, but it was enough as they lost 3-2.

Auburn is hungry to avenge last year’s loss in the WCWS Championship Series and their next step is the SEC Tournament this week.

Louisiana-Lafayette (#13 last week) went 3-0 thanks to a sweep of in-state foe Louisiana-Monroe. They posted two four-hit shutouts and also won a close 6-5, which they led 6-0 after three innings. The Ragin’ Cajuns have the Sun Belt Tournament this week as they loom a very serious threat going into the NCAA Tournament.

Baylor (#13 last week) took two of three from Texas to close out the regular season. Game one was a 2-1 victory as Kelsee Selman allowed two walks and four hits in a complete game. Game two was a 3-1 loss as the Bears gave up three runs in the bottom of the fifth. Baylor won the third game 4-0 with Ari Hawkins driving in three runs. Baylor will be in the Big 12 Tournament this week.

Utah (#10 last week) lost two of three to Oregon State on the road. The opener was a 5-0 loss as Taylor Cotton one hit the Utes. Utah was only able to muster two hits in a 3-1 game two loss before rebounding for a 6-0 win in the finale. Kay Kay Fronda and Anissa Urtez both recorded 2 RBIs. The regular season ends with a three-game series against Washington.

James Madison (#15 last week) ended their regular season with a sweep of Elon. They won the three games by a combined score of 22-3 as Megan Good won all three games to improve to 34-1. Jessica Mrozek recorded 5 RBIs while Taylor Newton had 4 RBIs. The Dukes will be the top seed and host of the Colonial Athletic Association Tournament.

The Wolverines (#16 last week) ended their regular season with a fantastic sweep of Rutgers by a combined score of 45-2 over the three games. The finale was a combined no-hitter between Megan Betsa and Tera Blanco with Betsa striking out 17 over her two starts. Michigan is rolling into the Big 10 tournament, which will be held at their home field.

Ole Miss (#17 last week) wrangled two of three from Missouri on the road, which can be a difficult place to win at. They opened with 6-0 and 12-4 wins as Kaitlin Lee threw the opening game shutout allowing one walk and four hits. Game two was dominated by Ole Miss’ offense between Courtney Syrett (4 RBIs), Dylinn Stancil (3 RBIs), and Kylan Becker (2 RBIs).

The Rebels nearly had the sweep but gave up the tying run in the seventh and walk-off run in the ninth inning of the finale. They will be in the SEC Tournament and kickoff against Mississippi State.

BYU (#20 last week) continued their tear through the West Coast Conference going 6-0 on the week and 3-0 in the conference. The sweep gave them their fourth straight West Coast Conference title and the automatic bid. They opened the week with a 6-0 win over Grand Canyon thanks to a two-hitter by McKenna Bull where she struck out 9.

They swept Santa Clara on the road. The first two games were 5-0 and 3-1 wins while the final game was a 19-5 destruction with 11 first-inning runs scored. Ashley Thompson and Libby Sugg both had 4 RBIs in the game.

BYU finished the week with a 10-2 win over Utah Valley and a 4-1 victory over Utah State. The Cougars will have one final series at St Mary’s before the NCAA Tournament begins.

Alabama (#18 last week) lost two of three to rival Auburn at home. They lost the opener 3-0 in nine innings and 4-1 in game two. They came back to win the finale 3-2 to salvage something against their rival. Alabama is 9-11 in their last 20 games going into the SEC Tournament where they open with Arkansas.

LSU (#19 last week) went on the road and lost two of three to South Carolina. All three games were decided by two runs or less. LSU’s offensive production was quite even as only two players (Emily Griggs and Amber Serrett) finished with multiple RBIs in the series. LSU opens with Missouri in the SEC Tournament.

Below is the Week Nine Power Rankings table: