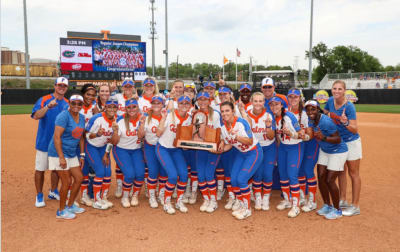 The 2017 NCAA Division I Softball bracket is now known and the bracket can be found here. The Oklahoma Sooners are the defending National Champions after defeating the Auburn Tigers in the 2016 WCWS Championship Series. The Florida Gators are the top overall seed followed by Arizona, Oregon, and Florida State.

The tournament will get started with the regionals between Thursday, May 18 and Sunday, May 21. Below are the 16 National Seeds as ranked by the NCAA.

Below are all 64 teams that have made the 2017 NCAA Division 1 Softball tournament. In the sortable table below, the automatic bids are listed first followed by the at-large bids listed in order of conference. The records for each team and which regional they have been assigned to are provided as well.

The 2017 NCAA Division 1 Softball tournament will start with 16 regionals divided into four teams per regional. Each regional employs the double-elimination format with the 16 national seeds listed above hosting a regional. The regionals are listed in order of the potential Super Regional matchup (i.e. #1 vs #16, #9 vs #8, #13 vs. #4, etc.).

All dates and times listed below are tentative. Updates, along with final scores, will be made as the changes are known.

The Super Regional round of the 2017 NCAA Division 1 Softball Tournament will be a best of three series between the dates of Thursday, May 25 and Sunday, May 28. The campus sites for each Super Regional will be determined upon completion of the Regionals by the NCAA.

The 2017 Women’s College World Series will take place between Thursday, June 1 and Wednesday, June 7 with every game shown on one of the ESPN family of network channels. All of the games will take place at the ASA Hall of Fame Stadium and OGE Energy Field from Oklahoma City, Oklahoma.