Should Army Consider Joining The AAC? 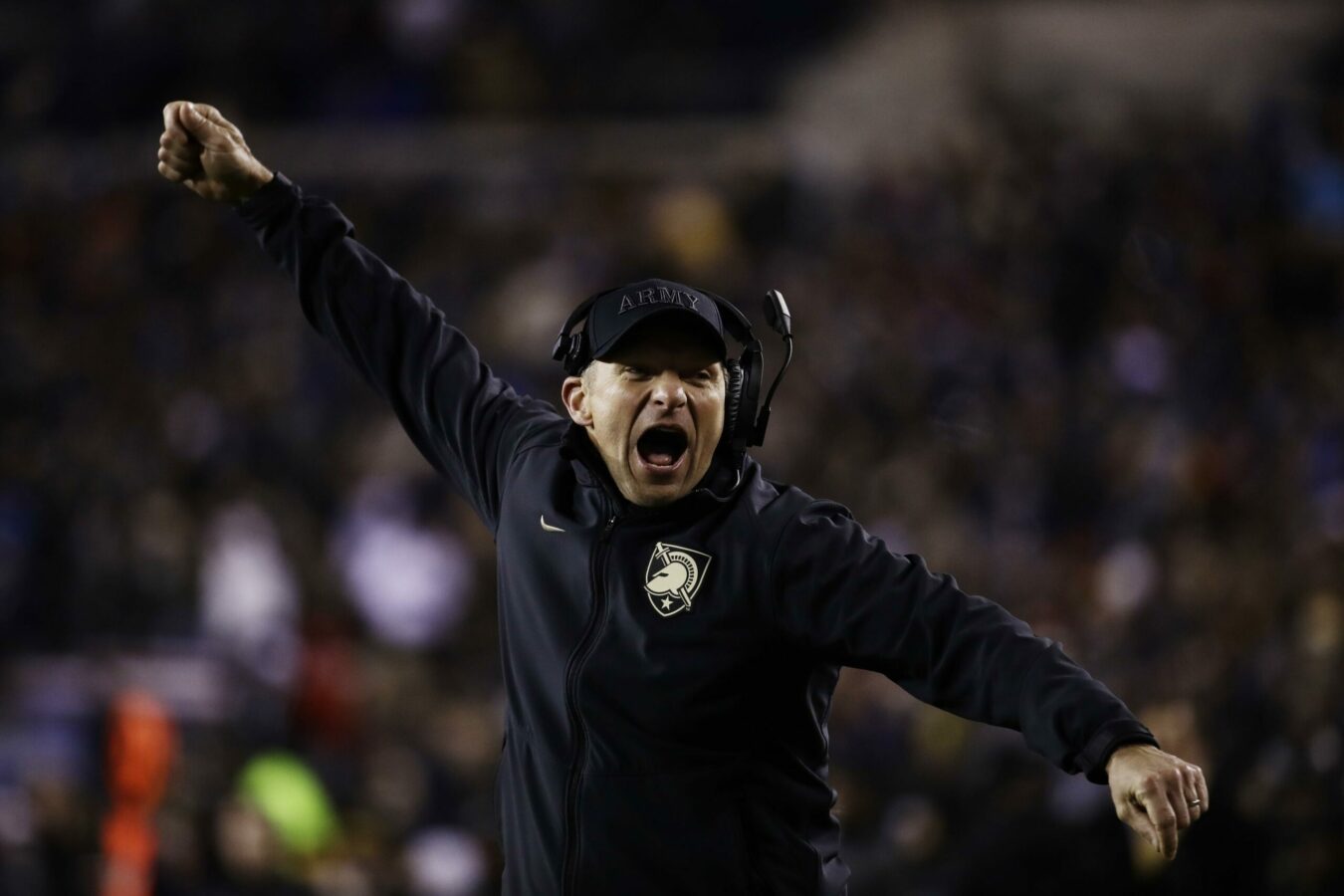 Army’s football team has posted three straight winning seasons with all three ending in bowl victories. 2017 saw the team’s first 10 win season in over 20 years when they finished 10-3. Army followed that up with an 11-2 record last season, which was the most wins in school history and finished ranked in the top 25. Most recently, Connecticut’s move back to the Big East has created a void in the American Athletic Conference. Should Army consider joining the AAC?

Let’s start by going to the past. The far past.

It is of little surprise that all of Army’s national championships came around wartime. With all the recruits being drafted into the Army, there was a complete arsenal on the gridiron.

Army won national championships in 1914 and 1916 going 9-0 during both seasons. The Cadets had a winning record each year from 1907 through 1938. Then came World War II. (The titles are not claimed by Army, but they are recognized by the NCAA).

Army would have several more strong seasons in the late 1940s and Pete Dawkins would take home the Heisman in 1958 after an 8-0-1 campaign. There were a few good seasons sprinkled in the next several decades, but the Cadets have not reached those heights again.

In 1996, Army achieved a 10-2 record with an Independence Bowl loss to Auburn. It was their first 10 win season in school history and they finished in the top 25 polls for the first time since 1958. Army struck while the iron was hot because in March 1997 they decided to join Conference USA (possible paywall) beginning with the 1998 season.

The 1997 season was Army’s last season as an independent before they went into a conference for the first time. They went 4-7, but that was actually the highlight of their time as part of Conference USA.

Their low point was the 2003 season in which they went 0-13 overall and 0-8 in Conference USA. The 2003 season was the first time in NCAA history that a program finished with an 0-13 mark. Todd Berry was the head coach for the first six games before being fired and replaced by John Mumford. Berry was at the helm for three and a half seasons in which he decided the wishbone offense was no longer needed at Army. Ouch.

Back To Independent Status

For their final C-USA season, Army hired Bobby Ross to bring them back to a respectable level. Ross lasted only three seasons going 9-25, but had to undo what Berry did. When Army left C-USA, they cited scheduling flexibility as the main reason for their departure. Eight conference games, plus the obligatory Navy and Air Force games left only one or (now) two games they could schedule as they saw fit.

Ross was succeeded by his protégé Stan Brock who went 3-9 in two seasons. He was fired and replaced by Rich Ellerson who led the Cadets to their first bowl game in 2010 since the ten-win 1996 campaign. Army soon went back to their losing ways going 3-9, 2-10, and 3-9 in Ellerson’s final three seasons.

When Army hired Jeff Monken in December 2013 to lead the program, it seemed like a good fit. Monken led Georgia Southern to three consecutive FCS Playoff Semifinal appearances using the triple-option offense that is employed by service academies. It took two seasons of 4-8 and 2-10 before it all came together in Monken’s third season.

Monken was rewarded for the 2018 season by being named the Coach of the Year. He also signed a contract extension with Army through the 2024 season.

The future is bright and Monken has signaled his intent to stick around so… Should Army consider joining the AAC or another conference?

The answer to the “should Army consider joining the AAC” question is nuanced. Some will point to fellow service academies Air Force and Navy successes in conference play. Others will point to keeping Army and Navy together as their rivalry is deeply intertwined with the fabric of college football. Perhaps Army’s own previous conference history, albeit short and disastrous, provides clues.

Let’s start with how Navy and Air Force have fared in their respective conference. Navy is simple as they have been in the American Athletic Conference for only four seasons. In that time, Navy has been co-champions of the AAC West twice, played in one AAC championship game (lost 34-10 to Temple in 2016), and had three winning seasons. 2018 was very poor at 3-10, but there were some close games as well. The jury is still out on Navy’s decision to go to the AAC despite some differing opinions (possible paywall).

Air Force has a much longer history of being in a conference. They were part of the Western Athletic Conference from 1980 until 1998 and then joined the Mountain West in 1999. In the 39 years since having a conference affiliation, Air Force has gone to 23 bowl games and has had consistent success since Troy Calhoun took over in 2007.

Part of Air Force’s success has been their geography. Even in the WAC, they were still relatively close to their opponents. Navy has the oddity of being the now second most eastern team in the AAC, yet were somehow placed in the west division where they still reside. Still, they have shown success in their brief AAC tenure.

If Army were to consider joining a conference the one that makes the most sense is the American Athletic Conference. They would be situated close to Connecticut, Navy, and Temple. The AAC might have to re-draw their divisions and the absence of Connecticut actually makes this interesting.

Had UConn remained, instead of having Navy be part of the “west” they could change the divisions to north and south. The north would have been comprised of Army, Cincinnati, Connecticut, Navy, Temple, and East Carolina. The south would have included Central Florida, Houston, Memphis, SMU, Tulane, Tulsa, and South Florida.

Without UConn in the mix, it becomes murkier. The east cluster of Army, Cincinnati, East Carolina, Navy, and Temple is clear. The west cluster is Houston, Memphis, SMU, Tulane, and Tulsa. Then, there are the two Florida schools in UCF and USF. Here, they could just split UCF to the east and USF to the west. In this scenario, there are balanced divisions, though somewhat awkwardly.

(Ideally, the two Florida teams would be in the same division, but unless the AAC is going to go the super-expansion route to 14 teams this partition will do. Besides, it stays in line with the conference’s confusing geographic philosophy).

Another problem is the Army-Navy game tends to be played all by itself with the potential of the entire college football audience watching. Being part of a conference would cause this to be played during November (or earlier) because it could impact the conference championship game. While it would be amazing for the winner of Army-Navy to determine one or possibly two of the AAC’s title representatives, is it worth foregoing the spotlight of being the sole football game on TV in December?

One workaround: Allow Army-Navy to keep its preferred time slot as a non-conference game. The AAC would probably agree to this and it would not impact the regular season title race. However, it would eliminate another week of flexibility from Army’s schedule. Speaking of scheduling…

A third problem is that Army clearly likes their scheduling flexibility and it has been favorable for them. It is not a mistake that Army’s last three seasons have been the best in over two decades. They had five home games in 2016, six in 2017, and six in 2018 while 2016 and 2018 both saw an additional game within the state of New York (at Buffalo both times). Also factor in the neutral site game against Navy, which gives Army 7 or 8 home/neutral site games that are relatively close to West Point.

Army gets complete control over 10 games a season, which allows them to play a few big teams for paychecks while still playing a few FCS opponents to get closer to bowl eligibility. Mix in several group of 5 teams who are beatable along with fellow independents and Army has a recipe for at least 6 to 7 wins each season as long as they field a competitive team.

Army’s short stint in Conference USA was a terrible mistake as they moved to a more restrictive schedule while moving away from the wishbone offense. That led to a terrible product on the field as they were not competitive at all.

Army’s return to independent status did not bear fruit until the last three seasons with Jeff Monken at the helm. Army has seen its best success in decades thanks to Monken’s leadership. Now let’s answer the question posed in the article’s title.

Should Army Consider Joining The AAC?

Absolutely they should consider it. They are stable with the proper offensive scheme (as opposed to their C-USA time) and their head coach, who clearly has the right ideas for the program. They would be a good geographical fit for the American Athletic Conference while preserving their annual rivalry tilt against Navy.

Should Army Join The AAC?

This is tougher to answer, but no they should not. They clearly value scheduling flexibility and if the likes of Massachusetts and smaller group of 5 teams continue to schedule Army, why deviate it from a successful formula? Going to a conference automatically removes 8 games from their scheduling control and with Air Force in the rotation, the Cadets will only have 3 games of their choosing. They will have additional AAC TV revenue, but will it cover the additional travel expenses? If not, Army might need to schedule more Power 5 teams potentially leaving them short of bowl eligibility.

For now, Army should remain independent. This could all change in a few years when conference realignment kicks off again (or sooner if UConn proves to be the domino).