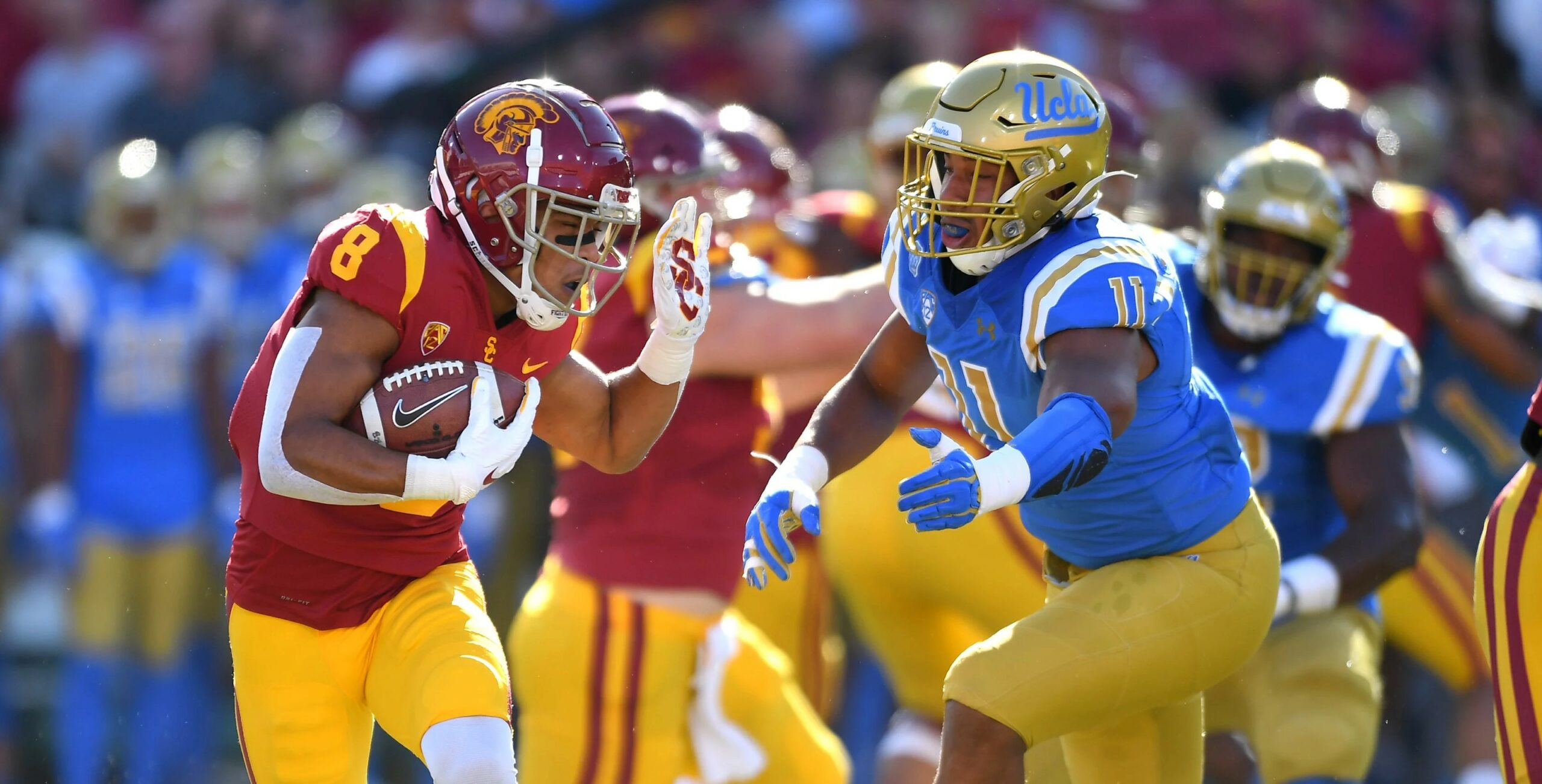 There has been no shortage of hot takes in the aftermath of UCLA and USC announcing their intention to leave the Pac-12 to join the Big Ten in 2024-25 and we’re here to add to the numerous speculation articles already on the internet. Let’s start with what we know.

The Pac-12 is losing UCLA and USC in 2024 and the Pac-12 is already exploring its expansion options in the wake of losing the two Los Angeles-based teams. Oregon and Washington are pining to join UCLA and USC in the Big Ten but the Big Ten is putting any additional invites on pause… for now. There’s also the Notre Dame prize hanging out there for any conference to offer a significant enough incentive for them to leave independence for good. All that – and the many potential implications – happened in the span of 24 hours.

So how did we get here? Many will correctly point to the July 2021 moves of Oklahoma and Texas to the SEC with the UCLA and USC additions being a direct response. We even speculated that the Big Ten might add Pac-12 teams in our article asking how the Big Ten would respond. The last major shift that occurred in 2010 through 2014 also helped lay the foundation for recent events. All of this is valid but we need to go further back to understand how we got to this point.

1984 – NCAA v. Board of Regents of the University of Oklahoma

Back in 1984, the Supreme Court ruled against the NCAA in a landmark case that still reverberates today. Obligatory disclosure: I am not a lawyer and some of the legal nuances of this case may not be accurately represented here so only broad strokes will be provided.

The lawsuit claimed the NCAA was limiting the number of games that could be shown on television as the NCAA believed stadium attendance would decrease if too many games were shown on TV. In the 1950s, 60s, and 70s nearly all schools abided by this except for Penn, which eventually relented and followed the rule. This changed in the early 1980s when major schools formed the College Football Association in an attempt to negotiate TV contracts. The NCAA did what the NCAA always does and threatened action against the schools including possible banishment from NCAA competition. Enter the lawyers and lawsuits.

After working its way through the courts, the case landed at the Supreme Court, which ruled against the NCAA claiming they “violated the Sherman and Clayton Antitrust Acts… which restrained open competition and trade.” In other words, the NCAA was acting like a monopoly. The loss was a major blow to the NCAA’s power and if that sounds familiar to current day, it certainly is because the NCAA is still losing major cases.

The 1984 Regents case was one of the first cracks in the NCAA’s monopoly armor. We’ve seen additional losses for the NCAA including the O’Bannon lawsuit that has helped pave the way for athletes to capitalize on their name, image, and likeness. There’s also the ongoing power structure change between the NCAA and its member schools, which has a lot of crossover with the TV rights.

Speaking of TV rights, the 1984 case is largely why we’re here today. Schools were free to negotiate TV contracts, which eventually led to conferences negotiating them as a package and aligning with the major networks. As we’ve seen, the number of networks has grown immensely alongside the TV revenues generated. It was about the money back then and still is today. At least now the athletes can get a cut, which wasn’t possible 5 years ago.

We’ve now reached the current day where money is driving realignment changes most thought improbable five years ago. The NCAA is a shell of its former self, the two biggest conferences – the Big Ten and SEC – are in the college sports realignment version of the Cold War arms race calling all the shots, and college sports are on the precipice of changing forever.

The below scenarios are pure speculation and not all-encompassing of every possible outcome. In other words, it’s like a lot of other articles posted here. Some possibilities will be contradictory but we’ll try to lay out various scenarios and the biggest potential impacts.

The first is that the Big Ten keeps expanding: they go after Notre Dame, additional Pac-12 members, Big 12 schools, or ACC schools (or some combination of the aforementioned). In turn, the SEC responds by raiding additional Big 12 schools or going after ACC programs and off we go to 2 super conferences full of the biggest schools with everyone else left behind.

Another option is for the Big Ten and SEC to stand pat at 16 for a while. The Pac-12 reloads via the Mountain West or Big 12 while the Big 12 may respond by adding additional Mountain West or AAC teams (or even go after the Pac-12?). The backfill dominos are almost guaranteed to fall no matter what the Big Ten or SEC does because the Pac-12 will want to add teams and there are only so many in the Western part of the US.

That will lead to the Mountain West likely needing to backfill from the FCS. The Big Sky Conference is particularly on notice because of the geographic overlay. The Missouri Valley Football Conference might be affected if a particular group of schools is deadset on jumping to the FBS together (i.e. the Dakotas).

The FCS is where we might see wholesale changes as they are currently full of conferences just above the minimum of 6 needed to maintain automatic qualifier status to the NCAA postseason. While FCS teams make little in comparison to FBS schools, there is no better opportunity for a school with FBS aspirations to make the leap than the current climate.

As of 2022, here are the FCS conferences and the number of teams:

There are 15 FCS conferences as of 2022 and over half (8) have 7 or fewer fully eligible Division 1 AQ members. Some of these conferences will get better as D2 members become fully eligible D1 members but that process takes 4 years, which is why we’ve seen a plethora of football scheduling alliances in the FCS. These changes are only going to increase or be reversed in some cases with the latest news.

Given all the uncertainty, it wouldn’t be surprising to see several conferences merge for football permanently. Furthermore, if the Big Sky gets raided by the Mountain West, they may be willing to invite some of the WAC members such as Utah Tech or former Big Sky program Southern Utah. The Texas-based WAC teams may have to find a new home if the WAC cannot find additional football-playing members. This is only speculation but the same could be said for some combination of the ASUN, Big South, MEAC, Ohio Valley, and Southland.

If the FCS starts losing teams to FBS conferences that backfill membership, will the FCS go back to Division 2 and bring up more teams? Will they attempt to adopt their own structure that fits better than the current NCAA model and a future FBS structure?

All these changes point to a larger issue stemming from realignment: the stratification of the college football structure. Right now it’s relatively clear-cut:

The gaps between each tier get larger and larger as you go down the list but if only 2 conferences are calling the shots, what happens to the other teams and conferences left behind? That uncertainty is probably part of what is driving these decisions. No one wants to get left behind and if leadership at a school is uncertain about the future, decisions like UCLA and USC to the Big Ten are made.

It’s funny to talk about the distant future when the present has so many unresolved items but one big question that remains: how does this end? Can a super conference of 20 teams really be stable for the long term? When will the gravy train of TV revenues end in college football? The NCAA is expected to have little influence in future matters, so how will the teams and conferences handle the power-sharing? All it takes is one school or one rogue university president who wants more and we start the whole seismic shift again.

The last 12 months in college sports have been a wild ride but it’s clear this is far from over. Welcome to the latest rendition of the college sports realignment arms race and it will only escalate from here.