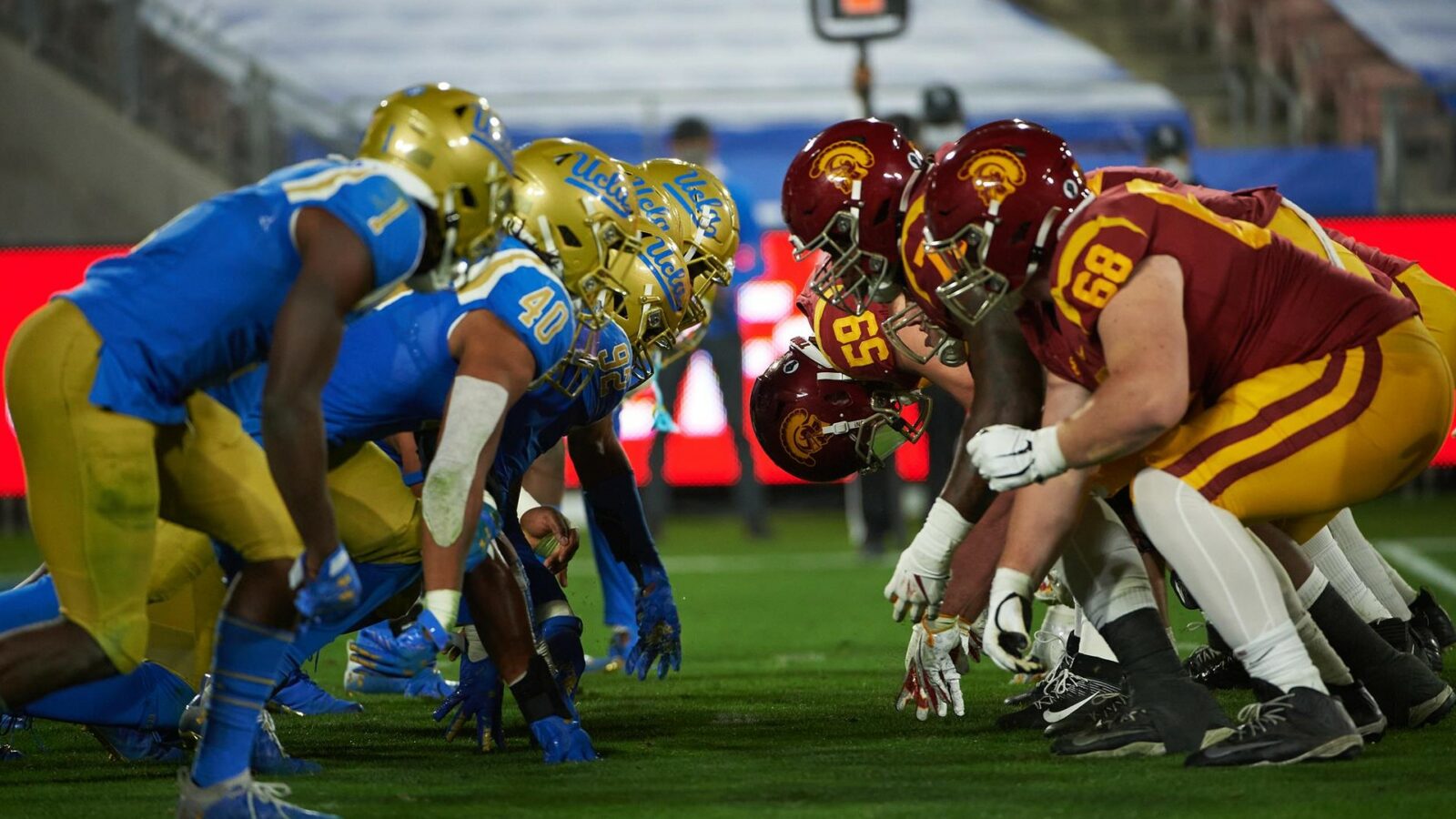 The calendar has shifted to July and with it is a new academic year. That means we can begin looking to the future for the changes happening for the next academic year in 2023-24. We will list the known changes for Division 1, Division 2, Division 3, and the NAIA below. This list will not include previous years’ changes from 2021-22, 2020-21, or earlier realignment moves.

7/1/22 Update: We will kick off this summary with the two biggest news stories in recent realignment memory: Oklahoma and Texas will move to the SEC no later than the 2025-26 academic year although they could join a year earlier in 2024-25. The other seismic shift was the duo of UCLA and USC announcing they are leaving the Pac-12 to join the Big Ten starting with the 2024-25 academic year.

BYU will be joining the Big 12 conference starting with the 2023-24 academic year alongside the three AAC teams Central Florida, Cincinnati, and Houston. With the AAC needing to reload after losing 3 members, they opted to raid Conference USA for 6 members: Charlotte, Florida Atlantic, North Texas, Rice, UAB, and UTSA. Those 6 are moving to the AAC starting with the 2023-24 academic year.

Hartford announced in May 2021 that they would drop from Division I to compete at the Division III level starting in 2023. That timeline is subject to approval from the NCAA with the expected full D3 membership to start in the 2025-26 academic year. Hartford will join the Commonwealth Coast Conference starting in 2023-24.

Conference USA will welcome four new members with two FBS independents and two FCS teams joining the conference. Liberty and New Mexico State will leave FBS independent status to become members of C-USA. The two FCS teams moving up will be Jacksonville State from the ASUN and Sam Houston State from the WAC. All four schools will join beginning with the 2023-24 academic year.

Murray State’s football program will join the MVFC starting with the 2023-24 season. The Racers’ other sports have already moved to the similarly named but separate conference of the Missouri Valley this year. In a similar vein, North Carolina A&T will move its football program from the Big South to the CAA in 2023-24. NCAT is already a member of the CAA in all other sports but wanted to help the Big South keep its FCS Playoff automatic qualifier spot for the 2022 season.

A student referendum to increase fees was passed at UT-Rio Grande Valley, which puts the school one step closer to starting football. The final step before football becomes officially sponsored by the school is a vote from the Board of Regents, which will happen in early 2022. The football program is likely to start playing in 2024 or 2025.

Chicago State left the Western Athletic Conference after the 2021-22 academic year but there has been no indication of which conference they will be headed to – if any. The Division I path forward for Chicago State has many obstacles.

7/11/22 Update: Lamar University announced they would rejoin the Southland Conference in 2022 – a year earlier than originally planned. The move leaves the WAC with only 6 members for 2022.

8/3/22 Update: Campbell University announced they are leaving the Big South to join the Colonial Athletic Assocation starting in 2023. The CAA will have 15 football-playing members in 2023 with the recent string of new members.

7/1/22 Update: Anderson University (South Carolina) will be adding football with the intent to join the South Atlantic Conference starting with the 2024-25 season.

Post University (Waterbury, Connecticut) announced an intention to become a Division II member in football. They will be moving from a sprint football team into a to-be-determined Division II conference in the future. The Eagles are a member of the Division 2 Central Athletic Collegiate Conference (CACC), which does not sponsor football. 2022 will mark the 2nd year that Post has fielded a full-sized football team.

7/1/22 Update: Carlow University announced plans to move up to the Division 3 level although a definitive timeline has not been established. Carlow is currently a member of the USCAA and NAIA for its various athletics teams.

Centenary College (Shreveport, Louisiana) announced they will bring back football starting with the 2024-25 season. Centenary had a football program from 1894 through 1941 and again in the 1960s but scrapped the sport. The school is a member of the Southern Collegiate Athletic Conference in most sports. The SCAC does not sponsor football, which means Centenary will have to find a different home for that sport.

The North Atlantic Conference will be expanding for the 2023-24 academic year with two new members. Lesley University (Cambridge, Massachusetts) will move from the New England Collegiate Conference while SUNY Morrisville will leave the United East Conference (the football team is currently in the Empire 8 conference, a sport the NAC does not sponsor).

Mills College – based in Oakland, California – announced it would no longer be a degree-granting institution but this later changed to a merger with Northeastern University out of Boston, Massachusetts. No sports will be sponsored by Mills following the 2022-23 academic year.

Southwestern University (Georgetown, Texas) announced a move from the American Southwest Conference to the Southern Athletic Association in a football-only move starting with the 2023-24 academic year. They will be the tenth football member of the SAA when they join in 2023 and will have some company as an affiliate member. Trinity University (San Antonio) has been an affiliate member of football since 2017.

7/1/22 Update: Bismarck State is planning to join the NAIA in the future although has yet to set a definite timetable for the move. Bismarck State is currently a two-year college but will transition to a 4-year college along with the move to NAIA. The logical destination for Bismarck is the North Star Athletic Association.

Evangel University (Springfield, Missouri) will have a new home in 2023-24 when they become members of the Kansas Collegiate Athletic Conference. Evangel will play the 2022-23 season as a member of the Heart of America Athletic Conference, which they joined in 1987.

Sierra Nevada University will become part of the University of Nevada, Reno as part of an agreement between the two schools. SNU participates at the NAIA level in the Cal Pac Conference. Nevada and SNY have informed the U.S. Department of Education that the ownership change went into effect on July 1, 2022 but decisions regarding the sports programs at SNU have yet to be made.

Tennessee Southern (Pulaski, Tennessee) is rejoining the Southern States Athletic Conference in 2023-24 after spending three years in the Mid-South Conference. UT Southern has undergone quite the transformation in the last five years with a name change from Martin Methodist College to the current name of UT Southern after the joined the University of Tennessee system. UT Southern was previously part of the SSAC from 2013 through 2020.

Thomas University (Thomasville, Georgia) will leave The Sun Conference for a majority of sports and join the Southern States Athletic Conference beginning in 2023-24.

2 thoughts on “College Sports Realignment for 2023 and Beyond”