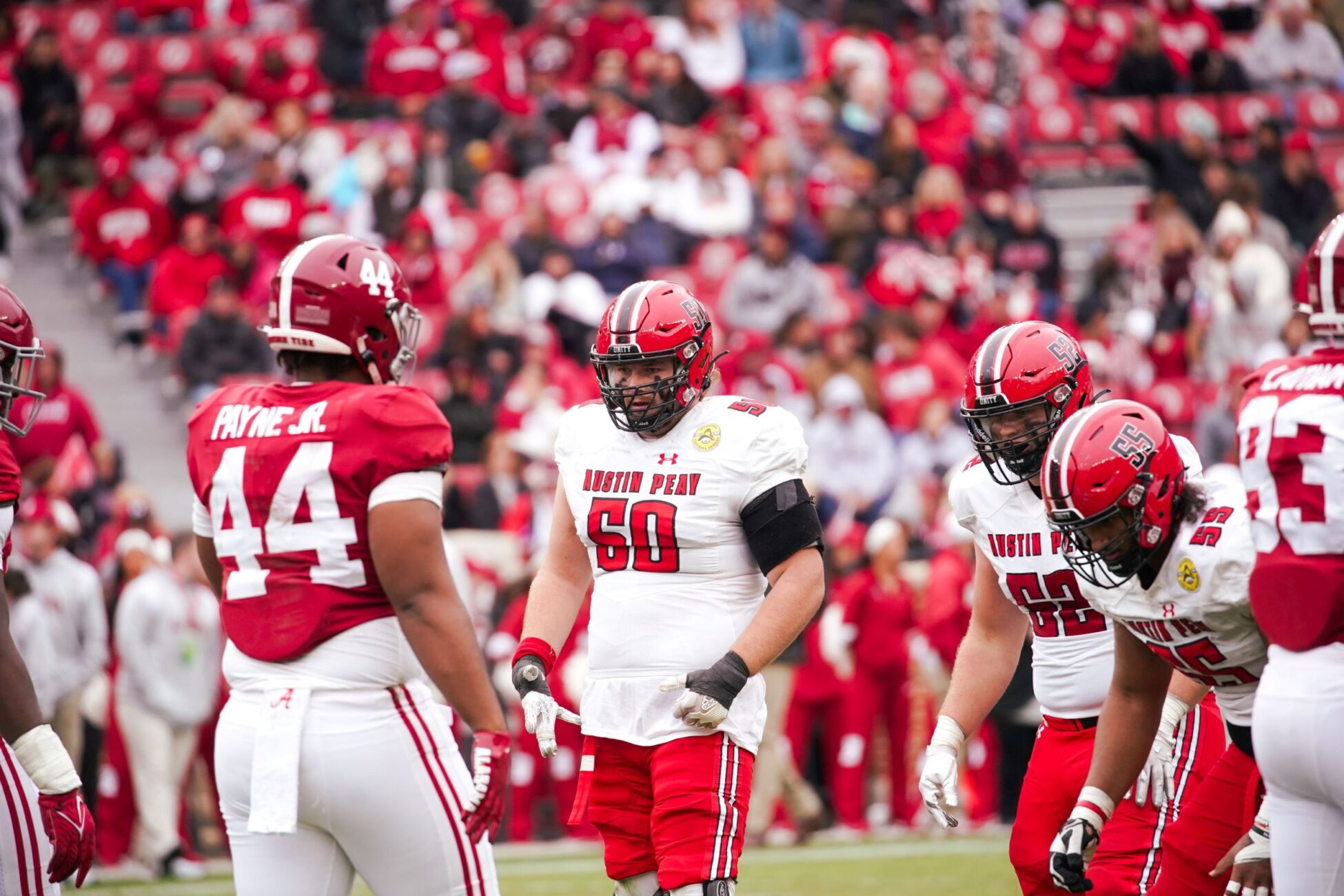 The realignment rumor mill never stops. This article serves as an update to our October 2022 article that discussed the potential for two schools to move to Division 1 and cover additional reports that have surfaced over the last few months. As always, you can find all of the latest official moves listed in our 2023-24 realignment article. We’ll start by reviewing the October news of New Orleans adding football, Le Moyne, and Indianapolis.

The University of New Orleans students voted on adding football in November but were overwhelmingly against the idea. The students that participated voted 69% against adding the sports of football, women’s golf, and women’s soccer as well as starting a marching band. The school said it intends to honor the vote and will not pursue football in the immediate future.

In November 2022, the UIndy Board of Trustees voted to not move up to Division 2. In an article posted by the school’s student newspaper, the announcement was provided with additional context from Interim President Phil Terry. Specifically, they mentioned that the words “at this time” were intentional meaning another attempt at a D1 move is happening down the road. The school will remain in Great Lakes Valley Conference… for the time being.

Since posting about Le Moyne’s potential Division 1 move, there has been no additional news. This is most likely due to Le Moyne wanting all their ducks in a row before officially making the move. We won’t be making a prediction on when it will happen given our track record (looking at you West Texas A&M from October 2020).

The Athletic reported that Chicago State is considering adding football at the Division 1 level. Chicago State is currently without a conference after the school decided to leave the WAC following the 2021-22 academic school year. We had an in-depth piece on Chicago State’s future in April 2021 that specifically included the line “it is not recommended they start offering it due to the large costs involved and the current athletic budget struggle Chicago State already has.” This is especially important if Chicago State wants to join a conference that offers scholarship football, which will further increase the costs.

The biggest obstacle to CSU adding football is money. They need to upgrade the current facilities to be able to recruit at a D1 level even if it’s non-scholarship football and they will also need to pay for an entire football staff. It was only 2 1/2 years ago the school decided to cut baseball due to budget reasons. Perhaps we’re not privy to certain information that has drastically altered the budget situation since mid-2020 and football is one avenue that can help solve the budget issues.

A School is Actually Adding Football!

Despite the optimism we showed with New Orleans adding football (those helmets were awesome), the students did not like the idea. However, there was one FCS program that announced they would start football: the University of Texas Rio Grande Valley. We will refer to them as UTRGV or the Vaqueros going forward.

UTRGV’s football program will join the WAC with the first full season being played in 2025. The Vaqueros will be immediately eligible for the WAC and FCS playoffs in 2025, which is a welcome bit of news for a conference that has seen a lot of change in membership since bringing back football in 2021. Speaking of the WAC and football membership, one school’s recent change might be a sign of a potential realignment move.

If and when SFA joins the UT System, they will have additional resources from the state’s flagship university, which will help them on multiple fronts. One area they might benefit from is the needed resources to move from the FCS to the FBS. This is far from written in stone and or even suggested but we already know that the WAC has dreams of returning to the FBS. Given the uncertainty over that process combined with current member Sam Houston State already joining the FBS in 2023, SFA might follow suit in a few years’ time if satisfactory progress isn’t made or they just want to move quicker.

Where might SFA wind up if they joined the FBS? Given the school’s location and recent realignment moves, Conference USA makes a lot of sense. C-USA has seen drastic changes with Marshall, Old Dominion, and Southern Miss all leaving earlier in 2022. In 2023, UAB, Charlotte, Florida Atlantic, North Texas, Rice, and UTSA will leave to join the AAC. Three of the future member of C-USA are from the FCS with Jacksonville State and Sam Houston State joining in 2023 and Kennesaw State joining in 2024. Overall, it’s not a bad fit from that perspective but also provides another UT System school in C-USA and at the FBS level.

The school ultimately did announce its intention to join the FBS alongside all football-playing members of the ASUN and WAC in December 2022. We’ll take a look at how they might be able to move to the FBS along with Austin Peay if the ASUN-WAC to FBS move doesn’t work out.

Austin Peay Has Eyes on FBS

Austin Peay Athletic Director Gerald Harrison let the school’s Board of Trustees know he wants to join the FBS by 2025. It’s a bold plan and one he acknowledged would take some faith, however, he has been the architect behind the school’s recent move from the Ohio Valley Conference to the ASUN. Interestingly, he wants to follow in the footstep of former FCS schools located in the Ohio Valley – Middle Tennessee and Western Kentucky – as well as fellow ASUN members Jacksonville State and Kennesaw State.

We say interesting because of the way the cards unfolded the last two decades in terms of realignment because it’s likely Austin Peay would join C-USA. Guess which four schools will be members of that conference by 2024? Yup, Jacksonville State, Kennesaw State, Middle Tennessee, and Western Kentucky would be fellow members in this scenario. Below is a map of the membership for C-USA in 2025 assuming both Austin Peay and Stephen F. Austin move up to the FBS and join the conference. Austin Peay is colored red, Stephen F. Austin is in purple, New Mexico State is orange to provide contrast for the proximity to UTEP, and all other schools are shown in teal.

In this scenario, C-USA would have 12 football members with Austin Peay nestled closely with the four aforementioned schools. As for Stephen F. Austin, they would bring some balance for the East-West divide although we have to acknowledge the outliers here in Liberty and especially Florida International. Overall, it isn't terrible for either APSU or SFA and C-USA would be a lot more stable than it appeared in the summer of 2022.

Going back to Austin Peay, the AD mentioned he would be willing to play football as an independent at the FBS level, which would render this moot. However, we think that's a last resort if they can't agree to terms with another conference or the ASUN-WAC to FBS movement fails but are dead set on moving up. We haven't mentioned another possible destination in the MAC. In recent years, the MAC hasn't been keen on realignment moves though historically they've been receptive (Marshall in 1997, UCF in 2002, Temple in 2007, and UMass in 2012). Joining the MAC would be better geographically but there's more to it than location and we don't know if there would be mutual interest from the MAC.

The ASUN and WAC Want to Join the FBS

Shortly after Austin Peay made it publicly known they wanted to move up to the FBS, the ASUN and WAC conferences announced their intention to become an FBS conference. Both conferences have suffered heavy losses during the current realignment cycle and if this move were allowed, it would open the floodgates for any FCS conference to follow suit. We discussed this in more detail in our December 2022 post and what it might mean for all parties involved.

Montana is Not Leaving the FCS

There was some belief that Montana might make a jump to the FBS but this was shot down by Montana AD Kent Haslam. Haslam stated unequivocally, "No, there are no current plans for us to go FBS." He cited the lack of an invitation from a current FBS conference as well as having to add another women's sport to maintain Title IX compliance. Haslam also noted that the last time Montana seriously considered moving to the FBS was in 2008 when the WAC was looking to expand. We can't help but note how things might be coming full circle as the WAC is trying to get back to the FBS and expand.

Additional Schools at the D2 and D3 Levels Possibly Moving

We've focused quite a bit on the FBS and FCS but there is no shortage of prospective changes at the Division 2 and 3 levels. There's a lot of movement in the Northeast at least according to these Twitter posts. Utica University (Empire 8 Conference in D3) is rumored to be moving with the Northeast-10 Conference as its target. The school's newspaper even alluded to this and mentioned Division 1 back in February 2022 when the school completed a rebrand but Athletic Director Dave Fontaine did not address those rumors.

Nichols College in Dudley, Massachusetts has been linked with a move to Division 2 but this has not been confirmed. They would join the NE-10 alongside Utica although they would be leaving the Division 3 Commonwealth Coast Conference. The rumors led to other CCC schools questioning their administrators if realignment plans were in the works. For Curry College (Milton, Massachusetts), the answer was no and Athletics Director Vinnie Eruzione cited costs as a huge factor against the movement for some D2 schools.

There is also the perpetual talk of Lone Star Conference movement and this time it's not West Texas A&M (sigh). The city of Wichita Falls, Texas released a long-term plan and specifically mentioned a feasibility study for Midwestern State to move up from Division 2 to the FCS to rejoin former LSC conference foes. The Mustangs recently joined the Texas Tech University System in 2021 to provide resources similar to what was discussed with Stephen F. Austin although the MSU administration is reportedly not exploring any move. From an outsider's perspective, it's odd to see a city pushing the D2 to FCS angle rather than the college-going with a feasibility study. We'll definitely keep an eye out for any developments here.

The Division 2 Mid-America Intercollegiate Athletic Association (MIAA) wants to expand beyond its current membership of 14. MIAA Commissioner Mike Racy made the comments in late December and stated there is no preference for football-playing schools meaning they could have a lot of options to achieve their expansion goal. There is some belief that expansion could help the conference move away from a conference-only schedule with the addition of divisions.