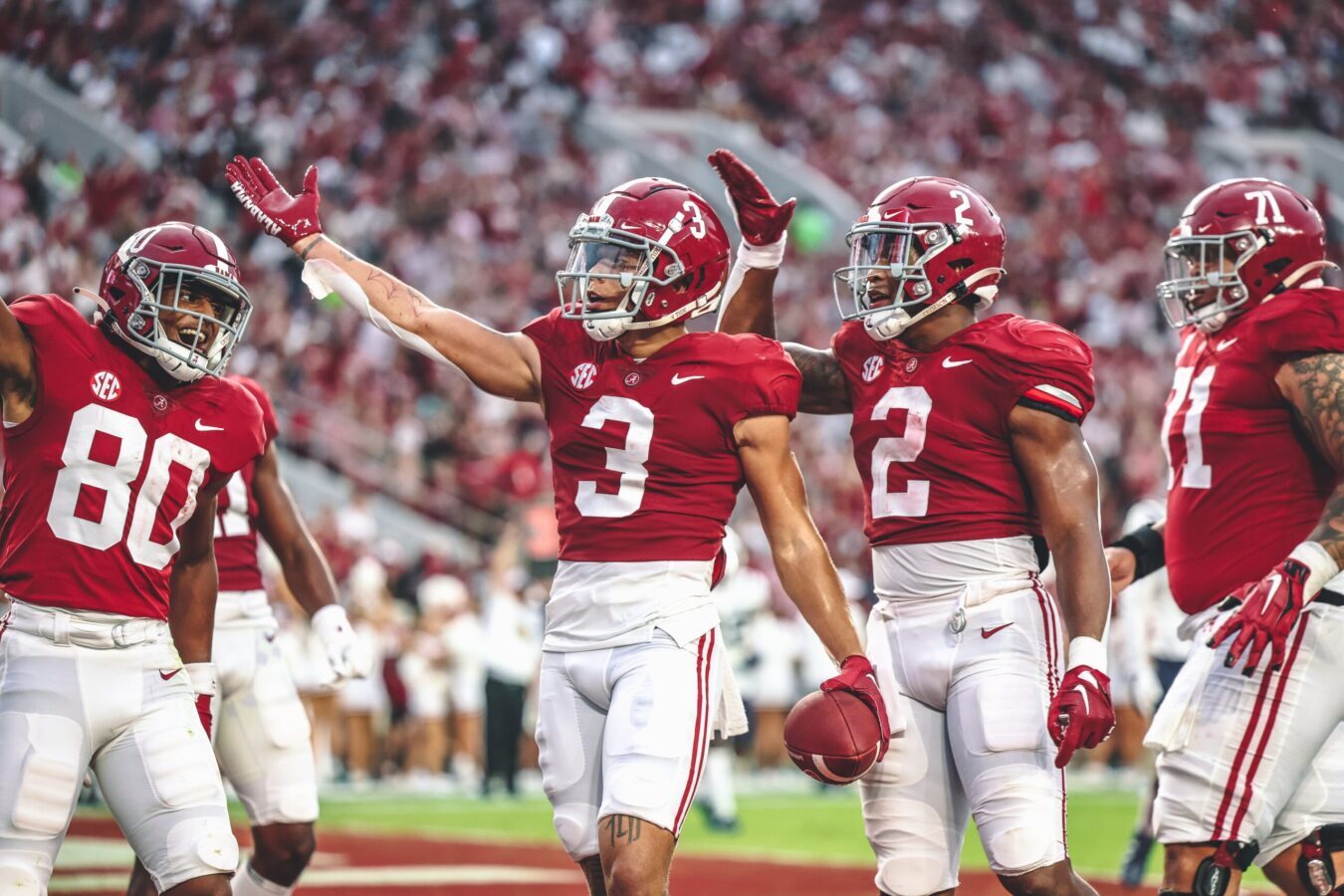 The College Football Playoff will expand no later than the 2026 season after the CFB’s board unanimously right as the 2022 season kicked off. The announcement came more than a year after the original proposal for 12 teams was rumored but was shelved for the time being.

All the details – including a concrete timeline – are not yet known but here is what will change courtesy of CBS Sports:

Based on early reports, teams will be allowed to play at a campus site or another site of a host’s choosing (i.e. Lucas Oil Stadium for Big Ten teams or Atlanta/New Orleans for SEC teams). Quarterfinal and semifinal games will be played at bowl sites pending any further agreements. Here are several examples of how a 12-team CFB Playoff would have worked the last several seasons. While we know some of the details and others are still to be determined, there are lingering questions that remain. Let’s list some of those questions and attempt to give some insights.

What Happens With Realignment Going Forward?

The expansion of the CFB Playoff feels like a strong reaction to recent moves we have seen between the SEC (taking Oklahoma and Texas from the Big 12) and the Big Ten (taking UCLA and USC from the Pac-12) to blunt any further drastic changes. Or perhaps it’s an attempt to stop the consolidation of the Power 5 Conferences into the Power 4 or Power 2.

Expanding the Playoffs should help calm the realignment waters a bit but there are still remaining issues to resolve: will the Pac-12 backfill or stay at 10 teams? Will the Mountain West backfill if they’re raided? Will the expanded playoffs lead to more FCS teams making the jump to FBS now that there are additional at-large spots? We still believe there is plenty of change on the horizon at the FCS level and not necessarily due to teams wanting to make the jump to FBS though that always remains an attractive option.

While an expanded playoff is a welcome change, that won’t stop realignment entirely, nor does it seem likely to appease all of the Group of 5 conferences since only 1 of them will likely be selected for the first few years. However, it does open up the possibility of more expansion, which could include ALL conference champions but that’s much further down the road.

Based on the proposal outlined above, it looks like bowl games are not going anywhere since some will be used as quarterfinal and semifinal round sites. What remains to be seen is how many (if any?) bowl games start or end over the next decade. For the 2022-23 season, we will have 41 bowl games – not counting the National Championship game – meaning 82 teams will participate. Under an expanded playoff, some of those games will become a quarterfinal or semifinal matchup meaning we could even see additional games added to account for all the teams that have winning records.

Another factor that has yet to be worked out is how the current bowl tie-ins will change based on the CFB participants. It’s likely the next team in line would simply take the bowl spot (i.e. if the AAC champion is selected for the CFB Playoffs, the second place team/conference championship loser is designated as the #1 AAC team for bowl selection purposes). That leads back to the original concern of not having enough bowl participants as well because at some point there aren’t teams with winning records in a conference left to choose from.

All of this is extremely fluid since we don’t know how the bowl tie-ins will be allocated, what happens with the existing bowls that are selected as a quarterfinal or semifinal host, and whether more bowl games will/will not be needed to support the number of winning teams each season. Love ’em or hate ’em, bowl games are here to stay and that’s probably true for an even larger CFB playoff because some teams will always want that extra game of experience and exposure even if it’s not associated with a playoff.

We’re not talking about CFB Playoff or bowl game scheduling. While there is a chance we could see a change in the schedule such as Week 1 moving back to “Week 0” in late August, we are talking about regular season scheduling by teams. We’ve talked about this before in the context of the FBS-FCS matchup and it feels relevant in other ways when discussing FBS versus FBS matchups. The first full week of the 2022 college football season saw some exciting matchups with the ACC on the road and the following tweet got us thinking.

The ACC had a woeful opening week with Virginia Tech losing on the road against Old Dominion 20-17, NC State needing a missed XP and FG to stave off defeat at East Carolina 21-20, and North Carolina escaping Boone with that epic 63-61 road win over Appalachian State. Even the two noteworthy wins of Pitt beating West Virginia 38-31 in the Backyard Brawl and Florida State defeating LSU 24-23 – in a de facto home game for the Tigers – were dangerously close to being additional losses.

What’s the upside for ACC (or any Power 5 team and conference) to continue scheduling these road games in an expanded playoff? Sure, there’s an additional margin for error now that 12 teams can make the playoffs but the margin is not that much greater. Will the Playoff Committee be more forgiving towards an ACC team that dared to schedule a road game against a good Group of 5 team (i.e. strength of schedule) or will they be more likely to rate a Big 12 team higher because they beat a MAC squad by 30 at home?

The truth is we don’t know how the committee will rank these because the criteria seem to shift slightly every year. In addition, scheduling is an inexact science so a decent Group of 5 team today could be a 2-10 team four years down and hurt the strength of schedule. The ACC or any conference could be having a rough season, which hurts the perception. Meanwhile, the other conferences may be so strong that a lower strength of schedule could be overlooked. Conferences may also opt to increase the number of conference games especially if it will help the SOS in the eyes of the Committee.

It’s these types of arguments that make college football such an engaging sport on and off the field. The debate over which team belongs, which team is best, and all the what-if scenarios are never-ending. There’s always that group of people or a fanbase that firmly believes they were wronged or they were deserving of a spot in the playoff. It’s been this way since the creation of the first poll and the expanded CFB Playoffs alongside the advent of social media means the debate will continue.

Which Teams Make the Playoffs (and How)

With 12 teams making the Playoff each season, we’re curious to see how the Committee will rank these teams and, more importantly, which criteria are given more weight relative to others. Will the SEC and Big Ten dominate the at-large berths? Will the strength of schedule/conference matter? How often will we see more than one Group of 5 team make the playoffs? We can use the previous system as an example but a 12-team playoff is quite different because other schools may change their scheduling philosophy or conferences may decide not to schedule FCS opponents in order to maximize their chances of making the CFB playoff. We look forward to seeing this one play out once the 12-team playoff era begins.

The Future of the NCAA

It’s difficult to reconcile the expanded CFB Playoffs against the future of the NCAA because there’s a ton of uncertainty around the latter issue. We simply don’t have any idea of how – or even if – the NCAA will exist in a decade. There’s been a lot of hankering to change the NCAA structure and some prognosticate anything from a Power 2 (something we’ve referenced in this article but hope doesn’t happen) to the Power 5 conferences breaking away from the NCAA to expanding March Madness (great in theory if done properly).

And in no surprise to literally anyone, the crux of the issue is money. That’s how it has been for decades and will continue to be the impetus for change going forward.

It’s clear from recent changes that the powers that be want to tilt everything in their favor even if it means dismantling the NCAA. Even if the FBS broke away, the NCAA could still be useful for the other Divisions as a way to help keep those institutions together. After all, the money isn’t nearly as significant to D3 schools compared to programs like Alabama or Texas. In short, we don’t know what is going to happen on this front nor do we know how or if the NCAA will still exist by 2030. There are just too many unknowns at this time but that’s not the only issue with a lot of uncertainty…

There is a bevy of other factors that may ultimately shape how College Football and the CFB Playoff are run. For example, we are still in the wild west days of NIL and there’s a chance CFB basically becomes semi-professional as a result. Whether the players unionize or a national NIL directory is built isn’t out of the realm of possibilities. Combine a possible breakaway with athletes unionizing and there will be many unresolved issues ranging from equal pay to the percentage of revenue that should be given to each athletic program to transfer rules. The demand for lawyers will skyrocket in this scenario.

There’s also the Title IX case that could potentially end up in front of the Supreme Court and have potential ramifications. This is where we have 2 caveats:

Combine any Title IX changes with the aforementioned break away and it’s clear as mud.

Finally, there are numerous areas that fall outside of college football and the playoff that might produce changes. For example, any demographic shifts over the next decade or two could play a role like what we’ve seen with the influx of people moving to the South. In addition, state and federal laws may change beyond what we expect that change how the game is played or which region is a hotbed for the sport. Furthermore, there’s no guarantee football will remain the most popular sport over the next two decades although it would take a monumental event to dethrone football.

We know an expanded College Football Playoff is on the way along with some of the details. Beyond that, an air of uncertainty hangs around college football and college athletics as a whole. Maybe the much rumored FBS break away from the NCAA doesn’t happen and the pay-for-play is actually standardized at a national level. What we do know is that changes are coming. Whether they will dramatically shift college athletics from where we are today or if it’s a subtle shift, we’ll have to let the process unfold.