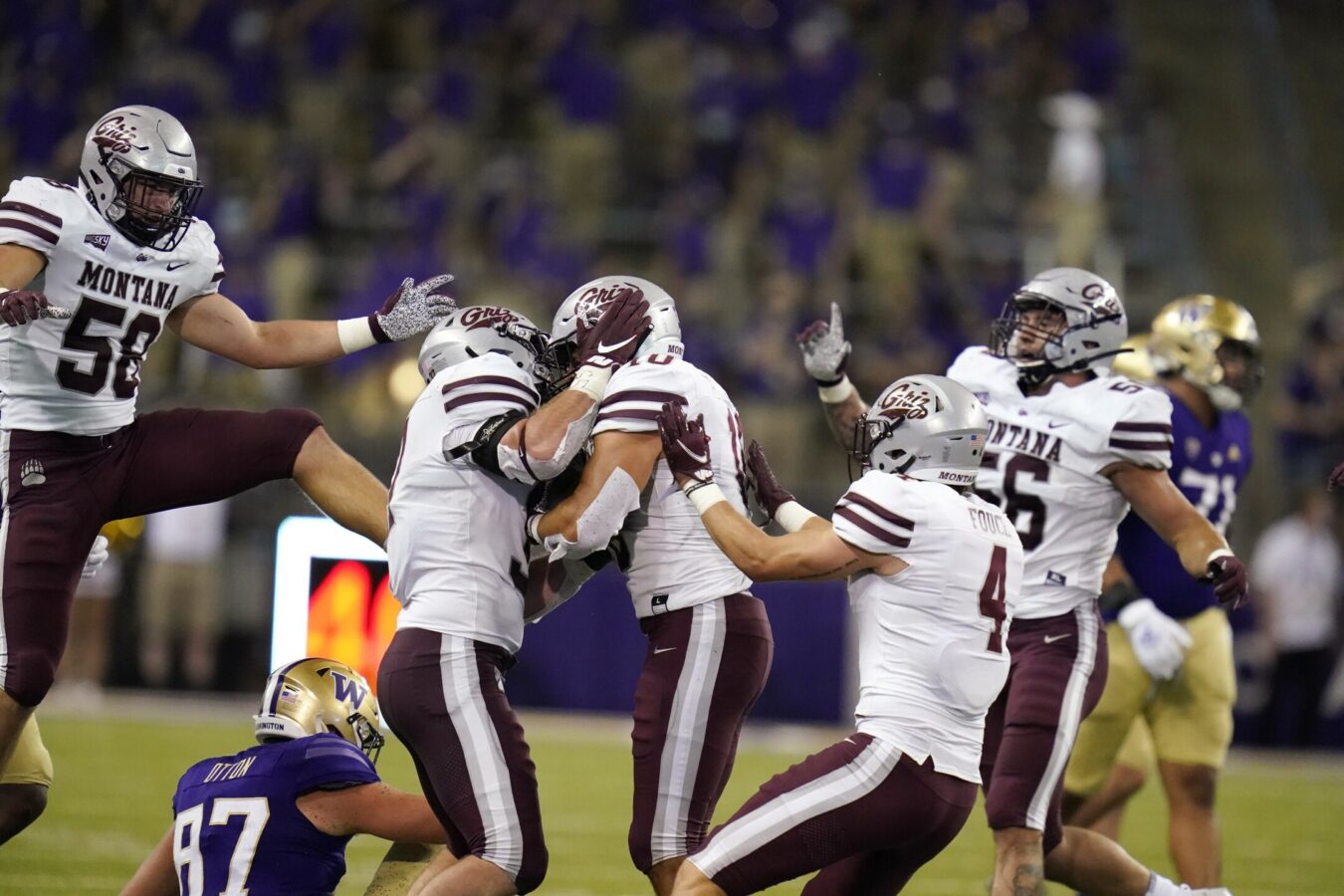 Since Division 1 split into the FBS and FCS subdivisions in 1978, there have been over 3,200 games between FBS and FCS teams through the 2021 season. The current era of matchups is mostly a matter of money for the FCS teams since some schools will schedule a Power 5 team for a big payout or schedule multiple FBS teams to help fund the athletic department. This is not universal as some FCS programs such as North Dakota State do quite well without having to annually schedule FBS opponents. (NDSU will play at Arizona in 2022 after a 6-year break of FBS opponents partially due to the 2020 rescheduling of the game at Oregon due to the pandemic).

Beyond the paycheck the school receives, we wanted to look at how these games impact the FCS playoff chances. How much does a win over an FBS foe help an FCS team in the eyes of the committee? Does playing an FBS team matter, even if they lose, or does it have no effect?

Those are just a couple of questions we will answer but we need to provide a bit of context for our analysis. First, we are using the information from Fear The FCS, which has provided historical information for all FBS-FCS matchups dating back to 1978 along with conference standings for each of those seasons as well. Combined with the numerous playoff structures, we will put all the information together to provide more insight into the questions asked.

Of course, there are plenty of caveats to this analysis. The first caveat is that the analysis is outcome-based and doesn’t include every single factor that might affect an FBS versus FCS matchup. We don’t account for game time, game location, weather, temperature, field type, or any other known factor. Furthermore, we can’t account for any in-game adjustments, injuries, or luck that often plays a role in how these games turn out.

We are also not accounting for any teams that were ineligible for the FCS postseason nor any abstentions from conferences. This particularly applies to the Ivy League since 1982 as well as the MEAC and SWAC since 2015. There are three reasons for keeping all these matchups in the analysis:

2) The MEAC and SWAC non-champions are still eligible for the FCS playoffs via an at-large berth, which means excluding them from the data set doesn’t make sense.

3) All three conferences are eligible for the FCS playoffs. Their decision to opt out doesn’t change the fact that they’re technically eligible and should be included in the data analysis. If they were in the playoffs, most of the numbers wouldn’t change significantly given how recently the MEAC and SWAC began abstaining (2015) and the small number of FBS-FCS games for the Ivy League since 1982.

One final warning: there will be a lot of numbers and math involved.

Since 1978, the FCS has determined its national champion via a playoff. This format has varied over time and has expanded from a 4-team playoff in 1978 to a 24-team playoff as of the 2022 season. There’s even talk of expanding the FCS playoffs beyond 24 teams as early as 2023 but that has yet to be definitively decided. Below is a table showing the FCS playoff structure dating back to 1978 with the number of teams in the bracket, seeded teams, and first-round byes.

The size of the FCS playoffs has grown quite a bit from the modest 4-team playoff in 1978. The 1985 through 2009 period was the most stable with 16 teams each year despite the tinkering with the seeded teams. The most recent expansions in 2010 to 20 teams and 2013 to 24 teams – save for 2020 when only 16 teams took part in the FCS playoffs – are where we stand currently.

If you are wondering how the expansion of the FCS playoffs coincides with membership changes, well… we have that data as well courtesy of Fear The FCS. The biggest changes occurred in 1982 (from 51 to 84 teams) when several conferences moved from FBS to FCS and then again in 1993 (from 90 teams to 118) when the NCAA mandated schools must have sports within the same division with some exceptions like hockey. This caused a lot of schools to move up from Division 3 by the 1993 season. The FCS will have 130 teams for the 2022 season.

There are a couple of issues with looking at these percentages by themselves. The first issue is that the rate of FCS over FBS wins is already low at 15% from 1978 through 2021, which means that teams who lose to FBS schools will be more likely to make the FCS playoffs and account for a higher number of playoff teams.

The second issue is that these percentages don’t isolate each category individually. FCS teams with wins over FBS teams only account for 23% of the FCS playoff berths but that doesn’t take into consideration that FCS teams who lose to FBS teams AND make the playoffs have played 5.5 times more games than FCS teams with wins over FBS foes. It’s no surprise they account for twice as many playoff selections with 5.5x as many chances of being selected. We’ll adjust for those factors by looking at each category individually as we provide some answers below.

(Note: These percentages will not add up to 100% for two reasons. 1) Not all teams who fall in these categories can or will make the playoffs. 2) The FCS teams who do not play an FBS team don't fall under the FBS-FCS matchup (obviously), which means the sum of games for those 2 categories is higher than the 3,224 FBS-FCS matchups from 1978 through 2021).

How Much Does Defeating an FBS Team Help an FCS Team's Playoff Chances?

This is probably no surprise to anyone that an FCS team defeating an FBS opponent greatly helps the chances of making the playoffs. After all, if you are good enough to beat an FBS team, you should probably be one of the best teams in your conference most of the time.

Again, none of this should be too surprising. The increase in the number of FBS versus FCS games leads to more opportunities for FCS victories. At the same time, the increase in the number of playoff spots leads to more chances for FCS teams to get into. A team on the bubble with a win over an FBS team is clearly going to be favored by the committee most of the time compared to a team that didn't play an FBS team.

Does a Close Loss Help an FCS Team Make the FCS Playoffs?

Let's start by providing a definition of a "close loss". We will consider a close loss to be any FCS team that lost by no more than one possession or 8 points at most. Based on this definition, there have been 452 instances of a "close loss" while losses of 9 or more points (crudely defined as a blowout for the purposes of this article) have happened 2,604 times.

When looking more closely at recent years, the difference is quite drastic. The expanded playoffs (since 2010, not including 2020) have seen close loss teams selected for the FCS playoffs 31% of the time while teams that have lost by 9+ points have only been selected 16% of the time. This result probably isn't too surprising given the expanded number of FBS-FCS matchups, the expansion of the playoffs, and the fact that closer games against superior teams look better on a playoff résumé.

Since 1978, there have been 720 FCS playoff games played through the 2021 season and one question that might come up is whether defeating an FBS opponent helps during the FCS playoffs? Yes, and we'll start with a simple, non-mathematical example.

An FCS team that defeats an FBS team is more than likely a good squad, which means that they're more likely to finish higher in the conference standings. In turn, they're more likely to either capture the automatic qualifying berth via winning the conference title, receive a first-round bye, and/or receive a home game (or two) to start the FCS playoffs. All of that makes the championship path easier whether it's a home advantage, getting a bye, not having an extra game to play, or some combination of those outcomes.

The data are pretty clear: defeating an FBS team is a hell of an indicator for FCS teams. 17 of the 44 FCS National Championships have been won by an FCS team that defeated an FBS opponent, or 39%. An additional 17 finished as runner-up.

Simply playing an FBS team is helpful for an FCS program in numerous ways. Based on what was provided above, it helps in the eyes of the playoff committee when compared to other programs that haven't played an FBS opponent (i.e. strength of schedule). Another way is more intangible, which is the game provides a sort of measuring stick for the players and coaches to see how they stack up against "superior" competition. There's also the paycheck a school receives, which usually helps bankroll the athletic department. Finally, the media can help boost a school's exposure - even if only temporarily - and that can be difficult to quantify how much it helps.

The above analysis was a simple, if not crude, method of determining how the FBS versus FCS matchup can impact the FCS Playoffs selections. It's important to remember there are plenty of factors that affect how a game and season can turn out that have not been included. However, we cannot ignore that FCS teams who play FBS opponents have a better FCS playoff chance than those schools that do not. We hope we provided some previously unknown insights and quantification of how much these FBS-FCS matchups can help the FCS schools come playoff time. We hope the FBS-FCS matchup is here to stay regardless of an expanded playoff field.