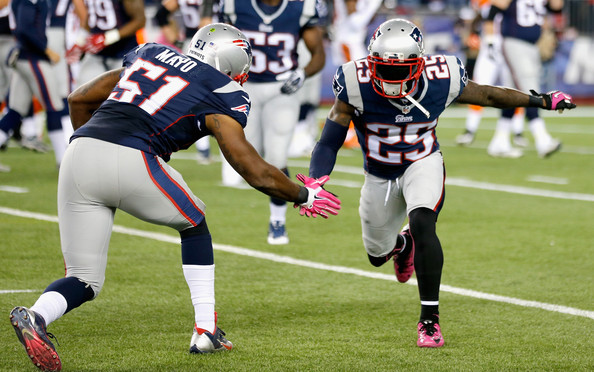 The New England Patriots have gotten back to their winning ways, but not without costs. Sources told ESPN on Monday that linebacker Jerod Mayo and running back Stevan Ridley will both be out for the rest of the season. Both suffered the injuries on Sunday in the Patriots’ 37-22 win.

Mayo injured his right knee while Ridley has a torn ACL and MCL. The injury to Mayo is especially crippling to the defense that he helped strengthen since he joined the Patriots in 2008. The Patriots are ranked 4th in passing yards given up with only 208.5 yards a game. The run defense has given up 111 yards a game, which is good enough for 14th in the NFL. Those rankings are prior to the Monday Night Football game between San Francisco and St Louis.

Mayo was placed on injured reserve in 2013 after six games due to a torn pectoral muscle.

As for Ridley, he will be missed as well. He had run for 340 yards and 2 touchdowns on 94 attempts in this season. The week 5 win over Cincinnati was his best game with 27 rushes for 113 yards and a touchdown. Ridley has been a solid contributor for the Patriots run game in his first three seasons. He has a career total of 2,817 yards and 22 touchdowns on 649 rushes.

Filling in for Ridley will be a combination of Shane Vereen, Brandon Bolden, and James White. Vereen has 216 yards and 1 touchdown on 42 carries, but can also catch out of the backfield with 18 receptions for 114 yards. Bolden and White are seldom used in the backfield, but that will change with Ridley’s absence.