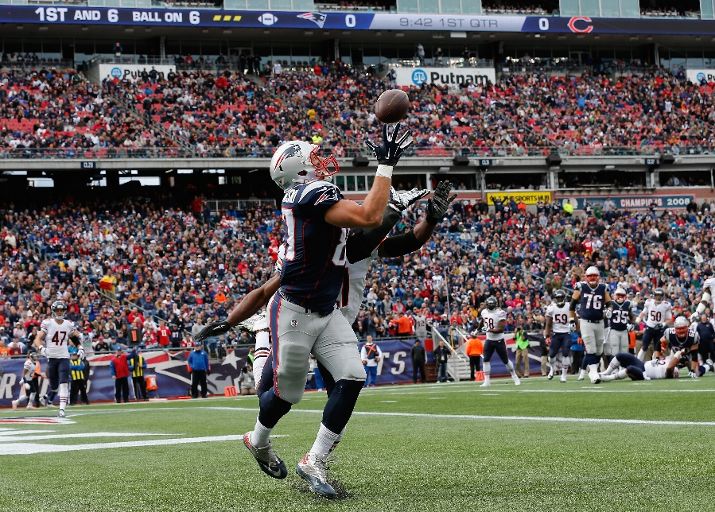 Tom Brady threw 5 touchdown passes, 3 to Rob Gronkowski, and the New England Patriots pulverized the Chicago Bears 51-23. Even the final score is misleading as the Patriots held 45-7 lead late into the third quarter.

The first Brady to Gronkowski pass came early in the first quarter form 6 yards out. The first quarter saw the Pats end up on the Bears one yard line and faced with a fourth and goal. The Patriots went for it and Jonas Gray was stuffed for a two yard loss, but New England was called for a false start. It was a blessing in disguise because the Pats kicked a 23 yard field goal to go up 10-0.

The New England offense continued to roll after a Chicago three and out. Brady hit Tim Wright from a yard out to make it 17-0. The Bears would finally muster a response with Jay Cutler finding Matt Forte on the wheel route out of the backfield to make it 17-7. However, the Bears would soon be faced with an onslaught to end the first half.

With under two minutes remaining, Brady and Gronkowski hooked up again with Gronkowski tapping both feet in bounds. The play was reviewed to determine if Gronkowski maintained possession and the official ruling was the call on the field stood.

After forcing a three and out, Julian Edelman returned the punt to Chicago 19 yard line for a 42 yard gain. On top of that return, a holding penalty was called against Chicago to put the ball on the 9 yard line. It took only one play for Brady to hit Brandon LaFell for the 9 yard touchdown strike and the Pats led 31-7.

The disaster continued for Chicago on the next play. Cutler was being sacked when he fumbled the ball with Rob Ninkovich picking the ball up and running it back 15 yard for a touchdown. It took a total of 57 seconds for the Patriots to go from a 17-7 lead to a 38-7 lead. Cutler’s desperation have on the final play was intercepted by Darrelle Revis to end the nightmare opening 30 minutes for Chicago.

The New England offense would not be stopped on the opening series of the second half. Brady hit Gronkowski, who shrugged off a defender and then ran into the end zone for his third score. The pass play was from 46 yards out and the Pats now led 45-7.

The Bears did manage to get to the Patriots’ 26 yard line, but Cutler’s fourth down pass to Alshon Jeffrey was incomplete. The Bears would get a second touchdown with Martellus Bennett‘s 20 yard touchdown catch on his back. The two point conversion was converted and the Bears only trailed 45-15 late in the third quarter.

The thoroughness of New England’s domination over the Bears cannot be understated. The Patriots were 7 of 11 on third down and completed 87% of their passes. The receivers had little trouble getting open or being stopped.

Jay Cutler went 20 of 30 for 227 yards with 3 touchdowns and an interception. He also had the fumble that was returned for a touchdown late in the first half.

Julian Edelman had a quiet day with only 1 catch for 14 yards. He was targeted four times, but it did not matter with the plethora of chance his teammates were getting.

Jonas Gray had the bulk of the carries with 17 for 86 yards. Shane Vereen ran only 5 times for 22 yards, but added 3 catches for 23 yards. James White had 6 carries for 17 yards.

Chicago (3-5) has lost four of their last 5 games with the last two against Miami and New England looking especially poor. They have a bye next week before traveling to face the Green Bay Packers for Sunday Night Football on November 9 in Week 10.

New England (6-2) are on a four game win streak after the poor showing in Kansas City in Week 4. There is no doubt that the talk in the aftermath of that game has spurred them to this point. They have a massive game next Sunday at home against Denver (6-1) before a bye in week 10.