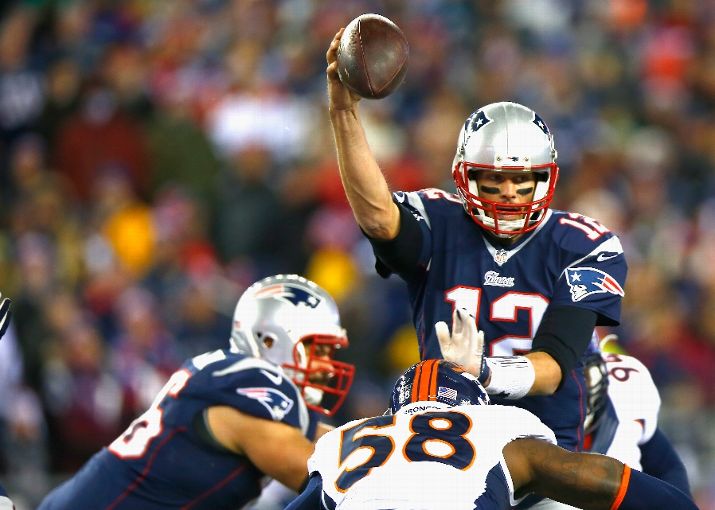 The Patriots won their fifth straight game on Sunday and did so in impressive fashion against the powerful Denver Broncos. Tom Brady’s four touchdown passes led New England to the 43-21 pounding of the Broncos. All four of those touchdowns went to different receivers.

Despite the final score, there was little scoring to talk about in the first few drives. Stephen Gostkowski’s 49 yard field goal broke the deadlock midway through the first quarter to give the Patriots a 3-0 lead. Denver responded right away with Ronnie Hillman pounding the ball in from a yard out to give Denver the 7-3 lead.

The Patriots opened the second quarter with another Gostkowski field goal, this one from 29 yards out for a 7-6 deficit. The Pats defense stepped up on the following possession with Rob Ninkovich stepping in front of Demaryius Thomas and intercepting Peyton Manning. Four plays later, Brady hit Julian Edelman for a 5 yard touchdown and a 13-7 lead.

Edelman was not done in the second quarter. After seeing their drive stall at their own 31, the Broncos punted the ball. Britton Colquitt had trouble with snap, but managed to get the punt away. Edelman took the punt, made a stutter step, and then went down the sideline with a huge opening. He continued to make people miss and finally got in the end zone to make it 20-7. The punt return went for 84 yards.

The Broncos did well to move the ball on the next drive, but Brandon McManus‘ 41 yard field goal hit off the right upright and fell back to the field.

The Broncos marched back down to the Patriots’ 34 yard line and decided to go for it on fourth and six. Akeem Ayers, who has been with Patriots for only two games, made the sack and gave the ball back to New England. The Patriots made the most of it with Brady hitting Shane Vereen for a 5 yard touchdown strike with 11 seconds left in the first half. That made it 27-7 at the break and the Patriots had all the momentum.

The Patriots opened the third quarter with an interception when Bradley Roby made a diving interception. The Broncos turned the pick into a touchdown with Manning finding Julius Thomas for an 18 yard touchdown. The Pats hit a 45 yard field goal to to extend their lead to 30-14.

Manning would throw his second interception when Wes Welker could not hang on to the pass and was crushed on the play. Brandon Browner caught the ball and returned it to the 10 yard line. Welker was diagnosed with a back injury and would not return after that play. The Patriots made quick work of the interception as they only need one play, a 10 yard pass from Brady to Brandon LaFell, to make it a 37-14 game.

The Broncos cut the lead to 37-21 with Manning hitting Hillman for a 15 yard touchdown, but that would be all they could muster against New England’s defense.

The second play of the fourth quarter produced a spectacular one-handed catch from Rob Gronkowski to reach the one yard line. Gronkowski would get the honors on the next play with a one yard touchdown catch on a slant from Brady to make it 43-21. Brady’s two-point conversion to Edelman was stopped short of the goal line to finish off the scoring for the game.

Denver had chances to close the gap, but were stopped on fourth and goal from the New England 8 on the next drive. Two drives after that, Manning’s pass to Emmanuel Sanders was a bit too long and the Broncos once again turned it over on downs.

Peyton Manning went 34 of 57 for 438 yards with 2 touchdowns and 2 interceptions. The 57 attempts were a by-product of an awfully ineffective run game. The Broncos had 43 yards rushing on 17 attempts for a paltry average of 2.5 yards. The leading rusher was C.J. Anderson with 3 carries for 18 yards. Those 18 yards all came on the final three plays of the game. Ronnie Hillman ran 10 times for only 16 yards with a touchdown.

Emmanuel Sanders had another big game with 10 catches for 151 yards. Demaryius Thomas had 7 catches for 127 yards as the second leading receiver.

Tom Brady went 33 of 53 for 333 yards with 4 touchdowns and one interception. It was Brady’s 22nd career game with four or more touchdowns, which moved him into fourth all-time ahead of Dan Marino.

The Patriots did not have a great game rushing themselves with 66 yards rushing on 25 carries. Jonas Gray ran 12 times for 33 yards and Shane Vereen had 11 carries for 29 yards.

The Denver Broncos (6-2) will play their second of three straight road games next week. They will face fellow AFC West foe Oakland (0-8) next Sunday.

The Patriots will have a bye next week before returning on Sunday, November 16 to face the Indianapolis Colts on the road.