UCLA Rebounds With Come From Behind Win Over California 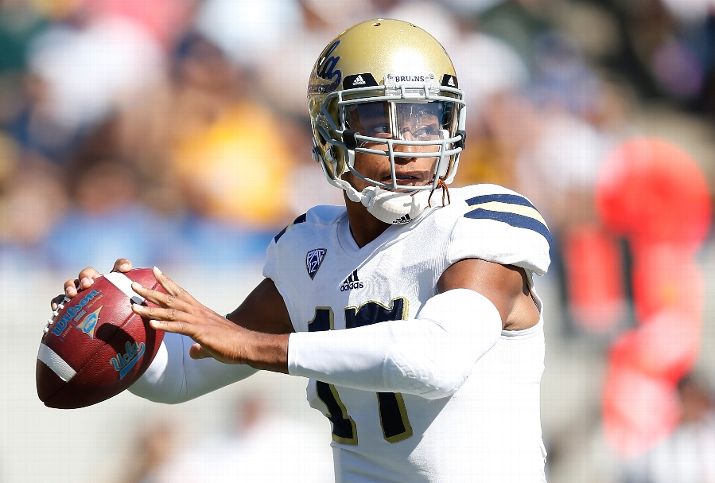 This article appeared on VAVEL USA.

Despite leading 24-14 at halftime, the UCLA Bruins needed a late field goal from Ka’imi Fairbairn to take the lead and ultimately get the victory over California, 36-34.

Brett Hundley started his good day with a 16 yard touchdown pass to Paul Perkins in the first quarter. That proved to be the only score of the first quarter as it ended 7-0 in favor of the Bruins.

Hundley did not start off the second quarter well with a lost fumble on his own 45 yard line. Hardy Nickerson ran it back 27 yards to the UCLA 18 yard line before Daniel Lasco punched it in from the yards out to tie the game.

The next drive for UCLA resulted in a 37 yard field goal from Fairbairn and UCLA reclaimed the lead at 10-7. That lead would not last long after Perkins fumbled on his own 20 yard line. Cal took advantage of the turnover with Luke Rubenzer hitting Chris Harper for a 7 yard touchdown and take a 14-10 lead.

Cal’s lead evaporated after the next Bruins drive when Jordon James ran in from 11 yards out to take a 17-14 lead. UCLA’s lead went to double digits with Hundley finding Perkins again, this time from 49 yards out, and it was 24-14 late in the first half for the Bruins.

UCLA opened the third quarter with a gamble on fourth and one. The Bruins went for it, but Hundley was stuffed for no gain and Cal got the ball with excellent field position. A Jared Goff pass to Kenny Lawler for 49 yards set up Lasco’s second touchdown run of the game and a 24-21 lead for UCLA.

UCLA extended the lead to 27-21 after Fairbairn’s second field goal of the game, this one from 24 yards out.

After a series of four punts, Cal received the ball back at their 46 yard line. Goff went 3 of 4 on the drive with 47 yards and the 24 yard touchdown pass to Trevor Davis. The extra point was good and that made it a 28-27 lead for Cal.

Once again, that lead would not last long as UCLA responded quickly. Hundley’s 15 yard touchdown made it 33-28 after he was unable to convert the two point conversion.

Midway through the fourth quarter, Hundley was picked off by Cameron Walker, who returned it 39 yards to the UCLA 32 yard line. After a defensive holding against UCLA, Goff hit Lawler for a 23 yard touchdown and a 34-33 lead after the two point conversion failed.

Hundley did not let his interception bother him as he led the Bruins down the field. He ran for 14 yards and a first down at the Cal 31 with an extra 15 yards tacked on due to a personal foul called on Michael Barton. While the drive stalled at the Cal 8 yard line, Fairbairn’s third field goal of the game gave UCLA the 36-34 lead.

On the ensuing kickoff, Trevor Davis returned the kick 23 yards, but was injured on the play. He was eventually taken off on a stretcher, but there was movement from him as he was being attended to.

Cal’s drive would end abruptly when Goff was intercepted at the UCLA two by Marcus Rios, which allowed the Bruins to run the clock out.

Brett Hundley had an excellent game. He went 31 of 42 for 330 yards with 2 touchdowns and an interception. He also ran for 94 yards and a touchdown on 17 carries. Hundley did have a lost fumble as did Paul Perkins, who had 15 carries for 86 yards. Perkins also caught 4 passes for 75 yards and 2 touchdowns to lead the Bruins in receiving.

Jordan Payton had 5 receptions for 47 yards while Thomas Duarte also had 47 yards receiving, but on only 3 catches.

Jared Goff went 25 of 41 for 303 yards with 2 touchdowns and a pick for Cal. Daniel Lasco ran 19 times for 44 yards and 2 touchdowns. Kenny Lawler caught 3 passes for 88 yards and a touchdown while Stephen Anderson made 4 grabs for 65 yards.

Cal (4-3, 2-3) will face the Oregon Ducks on Friday night with a two game losing streak.