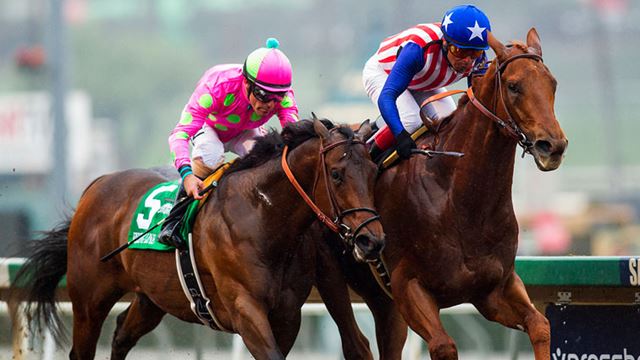 Dortmund remained undefeated, but it was not an easy task as he needed to re-rally in the stretch to capture the grade 3 Robert B Lewis Stakes. He won by a head over Firing Line who appeared to have the race measured.

It was the thrilling match race between the top two horses that everyone expected.

Tizcano went to the lead from the beginning with Dortmund right off his flank. Two lengths behind the leaders were Rock Shandy and Firing Line. In last was Hero Ten All, five lengths off the lead.

Dortmund took over the lead on the backstretch with Tizcano close in tow. Firing Line was now just a length behind with Rock Shandy and Hero Ten All in the back. As they hit the stretch, it was a match race to the finish line between Firing Line, who had now taken a one length lead, and Dortmund in second.

In the stretch Firing Line appeared to be gone before Dortmund came roaring back. The two were head and head down the stretch down to the wire with Dortmund making the final push to win by a head. It was 21 1/2 lengths back to third place and Rock Shandy.

Hero Ten All was fourth while Tizcano finished last. Sebastian’s Heart was scratched from the race.

Dortmund won as the three to five favorite paying $3.60 to win, $2.10 to place, and $2.10 to show. He covered the one and one sixteenth mile race in 1:42.20. Martin Garcia rode Dortmund to the victory while Bob Baffert is the trainer.

Dortmund earned 10 points for his victory to bring him up to a total of 20. Firing Line earned four points for his second place finish to give him 8 points total. Rock Shandy earned two points for a total of six while Hero Ten All earned his first point towards the Kentucky Derby Leaderboard.

The grade 2 San Felipe is the next prep race at Santa Anita on March 7. There will be races next weekend on the Road to the Kentucky Derby. The first race next weekend will be the grade 3 El Camino Real Derby at Golden Gate on Saturday, February 14. The other race will be on Monday, February 16 at Oaklawn Park in the form of the grade 3 Southwest Stakes.