Dominique Alexander Out For Spring Practice 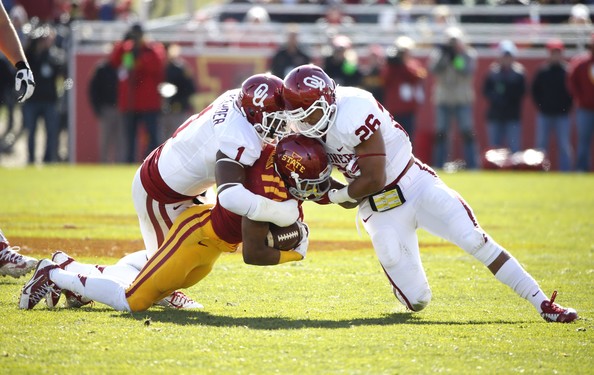 Dominique Alexander Out For Spring Practice

Oklahoma starting linebacker Dominique Alexander will miss all of spring practice due to wrist surgery. The surgery was performed last week.

According to head coach Bob Stoops, the wrist injury has been lingering. “It had healed up, looked like it was going to be ok,” Stoops said. “Through the winter with all the different working out, the different everything they have to do with their wrist, it wore down. Doctors didn’t anticipate that. It happened.”

Alexander had an excellent 2014, which culminated in being named to the All Big 12 Second Team. He started all 13 games recording 107 tackles, 6 tackles-for-loss, and 1.5 sacks.

Taking Alexander’s snaps will be freshman Tay Evans and Curtis Bolton. Both players are redshirt freshman.

Bob Stoops also announced several other news items. Defensive tackle Courtney Garnett will miss spring practice due to a torn ACL he suffered during workouts. Guard Nila Kasitati and wide receiver Sterling Shepard will both miss some time or slowly be brought back in spring practice.

In addition, defensive back Cortez Johnson is no longer on the team after. Johnson played in 10 games, starting 2, en route to recording 16 tackles and one pass break up in 2013. His playing time dropped dramatically in 2014 with only 2 games played and no stats recorded.

The final piece of news for the Sooners is that highly touted running back Joe Mixon will participate in all of the spring practices, but will not play in Oklahoma’s spring game on April 11.