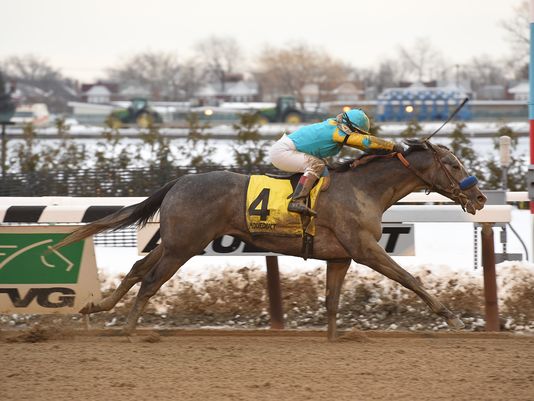 Despite never trailing by more than six and a half lengths at any call in his previous 7 races, El Kabeir showed he can close well off the pace in winning the Grade 3 Gotham Stakes. El Kabeir rallied from 12 lengths off the lead to win by 2 3/4 lengths in the end.

The race began with Toasting Master and Blame Jim tangling for the lead with Tiz Shea D and Uninfluenced behind the top duo. Further back in fifth was Dontbetwithbruno followed by Classy Class, Tencendur, Lieutenant Colonel, El Kabeir, and Combat Diver. The trailing group of six were at least eight and a half lengths off the lead at the first call.

The top four remained unchanged until the far turn when El Kabeir began to make headway and closed within 4 lengths. He switched out on the turn and found more room entering the stretch when he took over by 2 lengths with an eight of a mile to go.

While no one was getting to El Kabeir, there was a race to get the second, third, and fourth spots. Tiz Shea D had a good stakes debut and got up by a head for second over Classy Class. Fourth place was even closer with Toasting Master barely hanging to fourth place by a nose over Tencendur. One length covered second through fifth place.

The remaining order of finish was started by the Todd Pletcher trio of Dontbetwithbruno, Uninfluenced, and Blame Jim in sixth, seventh, and eighth respectively. Combat Diver was ninth and Lieutenant Colonel finished last by 21 3/4 lengths. The results can be found here via Equibase.

El Kabeir is by Scat Daddy out of the Unbridled’s Song mare Great Venue. He was ridden by Charles Lopez and is trained by John Terranova II. He paid $4.60 to win as the 6-5 favorite. The final running time for the Gotham Stakes was 1:45.56 over a muddy track.

It is safe to assume that El Kabeir will be back at Aqueduct for the Grade 1 Wood Memorial Stakes on Saturday, April 4. That race is worth 100, 40, 20, and 10 points to the first, second, third, and fourth place finishers of that race respectively.

The next Road to the Kentucky Derby race is on Saturday, March 14 with the Rebel Stakes at Oaklawn Park.