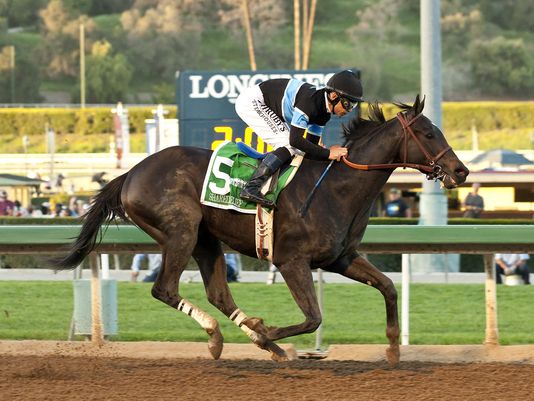 Shared Belief delivered the performance that he was expected to give on Saturday. Without much urging he won the Grade 1 Santa Anita Handicap by 4 1/4 lengths to push his career record to 10 for 11.

As expected, Moreno went straight to the lead with Catch A Flight (ARG) pressuring him from the outside. Sr. Quisqueyano was third with Shared Belief in great position in fourth only 2 lengths off the lead. Crimson Giant was fifth, Bronzo (CHI) was sixth, Diamond Bachelor was seventh, and Cool Samurai was eighth. Dynamic Sky sat back in ninth position early, Hard Aces was tenth, Patrioticandproud was eleventh, You Know I Know was twelfth by 10 1/4 lengths, and Imperative was last of the thirteen horses.

Moreno continued to lead the field through on the backstretch with Sr. Quisqueyano now pressing his way into second with Crimson Giant into third and Catch A Flight back in fourth. Shared Belief continued to sit two and a half lengths back in fifth. Hard Aces began to move up as well from tenth at the opening quarter to fifth by the one mile marker.

As the horses began their run into the far turn, Moreno was pushed for home by jockey Santiago Gonzalez. Shared Belief was pushed by Mike Smith on the far turn and took over at the top of the stretch. Moreno continued to run on with Catch A Flight also running in third in the stretch. Hard Aces was well back in fourth battling with Bronzo in fifth.

In the final eighth of a mile Mike Smith just hand rode Shared Belief to the wire to win by 4 1/4 lengths. Moreno stayed on for second by a head over Catch A Flight. It was another 2 lengths back to Hard Aces in fourth and Bronzo in fifth.

The remaining order of finish was Dynamic Sky, You Know I Know, Imperative, Sr. Quisqueyano, Cool Samurai, Patrioticandproud, Diamond Bachelor, and Crimson Giant. The Equibase chart can be found here.

Shared Belief went off as the heavy, heavy favorite as expected. He was the 3-10 favorite and paid $2.60 to win. He is by Candy Ride out of the Storm Cat mare Common Hope. He is trained by Jerry Hollendorfer and owned by Jungle Racing LLC. Jungle Racing is run by Jim Rome.

There are no plans beyond the Santa Anita Handicap for Shared Belief. He earned $600,00 for his win in this Grade 1 race to push is lifetime earnings to $2.932 million.