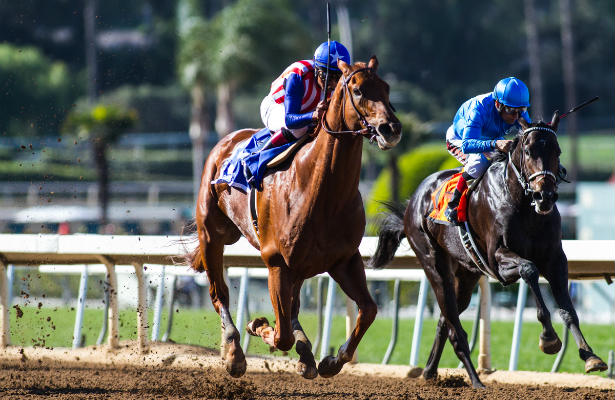 Dortmund moved his record to 5 for 5 in his career with an easy win in the Grade 2 San Felipe Stakes. His gate-to-wire performance as the 4-5 favorite guarantees him a spot in the Kentucky Derby.

Dortmund went straight to the lead and set a moderate pace. Sir Samson pressed him from the outside with Lord Nelson protecting the rail position and Bolo in fourth about a length and a half off the lead. Kenjisstorm was fifth, Prospect Park was sixth, Ocho Ocho Ocho was seventh, and Pulmarack was eighth. The Gomper was ninth by 5 lengths with Pain and Misery last by 7 lengths.

There was not much change in the running of the race as Dortmund went through a quarter mile in 23.12, a half mile in 46.98, and six furlongs in 1:11.30. On the far turn, Dortmund was pushed by Bolo who making a strong bid for the lead. Dortmund led by a head at the stretch call over Bolo with Prospect Park making his way into third.

Dortmund continued to pull away from Bolo while Prospect Park came flying up to second to miss by a length and a quarter. Bolo was third and Lord Nelson ran an even race while finishing fourth.

The remaining order of finish was The Gomper in fifth, Pulmarack in sixth, Pain and Misery in seventh, Ocho Ocho Ocho in eighth, Sir Samson in ninth, and Kenjisstorm was last in tenth by 38 lengths. The official chart can be found here via Equibase.

Dortmund is by Big Brown out of the Tale of the Cat mare Our Josephina. He was ridden by Martin Garcia and is trained by the venerable Bob Baffert. He ran the one mile and one sixteenth in 1:41.65.

Dortmund and Prospect Park will most likely come back in the Grade 1 Santa Anita Derby on Saturday, April 4. That race is worth 100, 40, 20, and 10 points to the top four finishers.