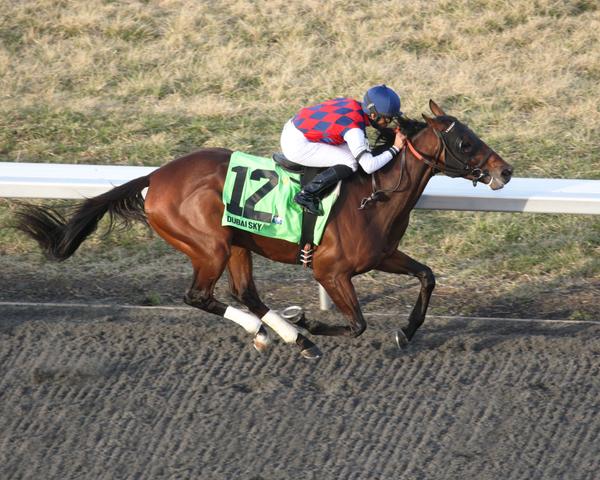 Dubai Sky had little trouble topping the Grade 3 Spiral Stakes after an excellent ride by jockey Jose Lezcano. The only thing left for the connections is to decided if they will nominate the three year old for the Triple Crown by Monday, March 23 at a cost of $6,000.

Watchyourbobber and Wireless Future went to battle for the lead early on with Royal Son behind that duo in third. Dubai Sky settled in fourth with a perfect position while Conquest Typhoon was fifth Firespike was sixth. Task Force Glory was seventh, the favored Metaboss was eighth, and Another Lemon Drop was ninth. The trio behind Firespike was about 5 to 6 lengths off the leaders. The final duo was Magic of Believing and Big Family.

The opening quarter was a quick 22.99 and the half mile was run in 47.57. Also at the halfway point, Dubai Sky was urged to move up and he was within a head of the lead as they hit the six furlong call. Wireless Future was clinging to the lead with Royal Son at his throat along with Dubai Sky. Firespike was fourth, Conquest Typhoon was fifth, and Watchyourownbobber was starting to back out of the race. 9-5 favorite Metaboss began to make a bold move on the far turn and was taken wide into the stretch.

For Dubai Sky, he was striding out as he was going for home and won by 2 1/4 lengths. Conquest Typhoon held off Firespike for second by a neck and Task Force Glory was back in fourth. Royal Son finished fifth while Metaboss flattened out in the stretch and finished sixth. The remaining horses in order of finish were Wireless Future, Another Lemon Drop, Magic of Believing, Big Family, and Watchyourownbobber.

The Road to the Kentucky Derby is not over for the weekend. On Sunday, March 21, the Grade 3 Sunland Derby will take place at Sunland Park. Post time is scheduled for 7:40 PM Eastern Time.