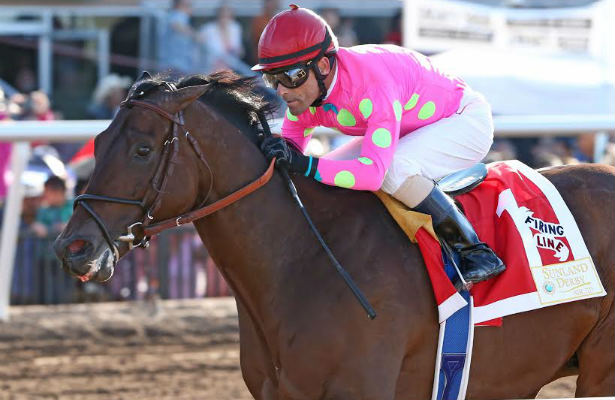 It was little more than a paid workout for Firing Line as he had zero trouble destroying the field on his way to a 14 1 /4 lengths victory in the Grade 3 Sunland Derby. Perhaps it was just a matter of getting away from Dortmund that allowed him to finally get a win.

The race began with no one dead set on getting the lead, but a hot pace still ensued. Firing Line got the lead early, but was content to maintain the rail position while other horses came wide to press the pace. It was Why Two pressing him on the outside with Malibu Mogul in third, Tiznow R J in fourth by a length and a half, and Pain and Misery in fifth. Sixth place belonged to Where’s the Moon and Dirt Monster was last of seven early on, but the entire field was within 3 1/4 lengths.

Firing Line continued to hold the rail spot and eventually took the lead on the backstretch over Why Two and Tiznow R J. Malibu Mogul was fourth at this point and started to back out of the race while Dirt Monster was fifth. Pain and Misery and Where’s the Moon were the last two horses, but still within contention.

By the time they hit the stretch, it was all over. Firing Line had an 8 length lead and would only make it larger by the end. He won by 14 1/4 lengths en route to a track record for one mile and one eighth. Where’s the Moon got up for second with Pain and Misery finishing third. Tiznow R J ran fourth.

The remaining order of finish was Dirt Monster, Why Two, and Malibu Mogul. Lord Nelson scratched earlier in the week leaving just a field of 7 to contest the Grade 3 Sunland Derby.

Firing Line has pushed his record to 2 wins from 5 starts, but also has three second place finishes. He is by Line of David out of the Hold for Gold mare Sister Girl Blues. He was ridden by Gary Stevens and is trained by Simon Callaghan.

Firing Line received 50 points for the Sunland Derby win to give him a total of 58 on the Kentucky Derby Points Leaderboard. Where’s the Moon earned his first 20 points, but is not Triple Crown nominated. He has until tomorrow, Monday, March 23 to be nominated to the Triple Crown for a fee of $6,000. Pain and Misery earned his first 10 points while Tiznow R J earned 5 points to bring his total to 7 points.

There are three races next weekend with all taking place on Saturday, March 28. The Group 2 UAE Derby from Meydan racecourse in Dubai is the first race. The Grade 1 Florida Derby from Gulfstream Park and the Grade 2 Louisiana Derby from the Fair Grounds will be the other 2 races.