Materiality Holds Off Upstart In The Florida Derby 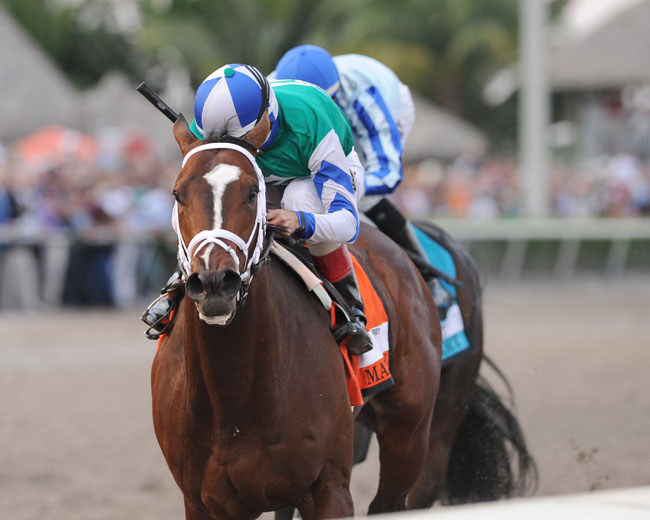 Materiality Holds Off Upstart In The Florida Derby

In what ended up being a two horse race, it was Materiality that won the Grade 1 Florida Derby over Upstart by a length and a half.

Jack Tripp took the lead out of the gate with a good break, but was soon taken on by Materiality with Upstart a length back in third. Itsaknockout settled in fourth, Quimet was in fifth, My Point Exactly was in sixth, and Ami’s Flatter was seventh. Indianaughty was eighth and the trailer was Dekabrist by more than 11 lengths.

On the backstretch Jack Tripp was still prompted by Materiality and Upstart was three wide. Quimet was fourth, My Point Exactly was fifth, Ami’s Flatter was sixth, and Itsaknockout was back to seventh. The trailing duo remained Indianuaghty and Dekabrist.

On the far turn the race turned into a match race between Materiality and Upstart as the other horses failed to make up any ground.

Throughout the stretch it was Materiality on the inside who repelled every attack from Upstart. He eventually pulled away to win by a length and a half. It was over 12 lengths back to Ami’s Flatter in third and Itsaknockout finished fourth.

The rest of the field, in order of finish, was Dekabrist, Indianaughty, My Point Exactly, Quimet, and Jack Tripp. The results chart can be found here via Equibase.

Materiality is by Afleet Alex out of the Langfuhr mare Wildwood Flower. He was ridden by John Velazquez and is trained by Todd Pletcher. He ran the one mile and one eighth in 1:52.30 while paying $5.60 to win, $3.00 to place, and $2.40 to show.

Materiality went off as the second choice at 9-5 behind Upstart who was even money.

The Florida Derby was the third Road to the Kentucky Derby prep race on Saturday. The first was the Group 2 UAE Derby and the other was the Grade 2 Louisiana Derby.