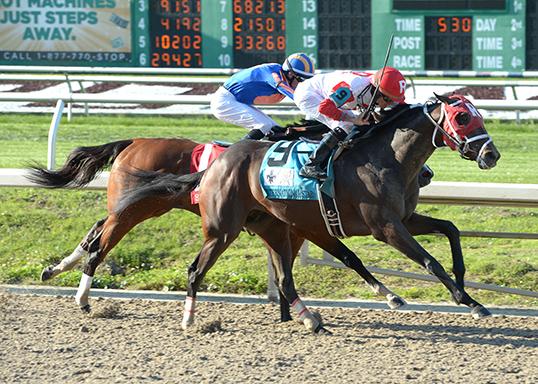 It was not easy, but International Star swept the Fair Grounds Kentucky Derby Prep Races with a narrow win over a very game Stanford on Saturday in the Grade 2 Louisiana Derby.

The race started with Stanford going straight to the lead from the rail with some pressure from Fusaichi Flame and Mr. Z. St. Joe Bay was in fourth on the outside, A Day in Paradise was fifth, and War Story was sixth. International Star enjoyed a ground saving trip in seventh early with Keen Ice eighth and Defondo ninth.

Stanford continued to lead on the backstretch with very little pressure. He went the opening quarter in 24.03, the opening half-mile in 48.59, and six furlongs in 1:37.94. Meanwhile, International Star began his move on the backstretch to get into better position on the far turn. On the turn, Fusaichi Flame and Mr. Z started to back out of the race with War Story making a wide move on the turn.

As they turned for home International Star got away from the rail and out in the open to make his drive towards the finish line. It took most of the stretch, but International Star got up to win by a neck over an excellent Stanford. It was 4 1/4 lengths back to War Story in third while Keen Ice finished fourth.

The remaining order of finish was Fusaichi Flame, St. Joe Bay, Defondo, A Day in Paradise, and Mr. Z. The results chart from Equibase can be found here.

International Star is by Fusaichi Pegasus out of the French Deputy mare Parlez. He was ridden by Miguel Mena and trained by Mike Maker. International Star paid $6.60 to win as the 2-1 favorite, $3.60 to place, and $2.60 to show. He completed the one mile and one eighth in 1:50.67.

The Grade 2 Louisiana Derby was the second of three Road to the Kentucky Derby prep races on Saturday. The first was the Group 2 UAE Derby from Meydan and the other was the Grade 1 Florida Derby from Gulfstream Park.

There will be three more Kentucky Derby Prep races next weekend across the country. The Grade 1 Wood Memorial from Aqueduct, the Grade 1 Santa Anita Derby from Santa Anita, and the Grade 1 Blue Grass from Keeneland will all be run on Saturday.