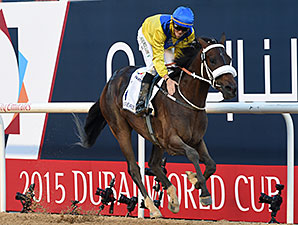 The Kentucky Derby will have an international flavor after Mubtaahij crushed his Group 2 UAE Derby foes in Dubai.

Tap That, Golden Barows, and Dear Domus all broke well with the first two battling for the lead into the first turn. Mubtaahij got a perfect spot behind the leaders while Sir Fever ended up in tight quarters and had to check out of the trouble. Alnajem Alfaiz and Faithful Creek were in the middle of the pack while the trailing trio were My Johnny Be Good, Maftool, and Motaa.

The three Japanese horses, Tap That, Golden Barows, and Dear Domus, kept pushing the pace and were soon prompted by Sir Fever on the backstretch while Mubtaahij continued to sit in the perfect position.

Leaving the far turn and entering the stretch it was all but over. Tap That and Golden Barows continued on for the finish line, but Mubtaahij switched out and took over handily. It was effortless in the final 300 meters for Mubtaahij as he strided away for the comfortable win.

Maftool rallied to be second over Golden Barows, who was pressed throughout the race on the lead. Motaa finished fourth.

The rest of the field in order of finish was Tap That, Sir Fever, Faithful Creek, Dear Domus, My Johnny Be Good, and Alnajem Alfaiz.

Mubtaahij ran the one mile and three sixteenths in 1:58.35. He is by Dubawi out of the Pennekamp mare Pennegale. He was bred in Ireland, was ridden by jockey Christophe Soumillon, and trained by Michael de Kock. Mubtaahij is owned by Sheikh Mohammed bin Khalifa Al Maktoum, nephew of Godolphin owner Sheikh Mohammed bin Rashid Al Maktoum.

There are still two more Kentucky Derby prep races on Saturday. The first is the Grade 2 Louisiana Derby from the Fair Grounds while the other is the Grade 1 Florida Derby from Gulfstream Park.