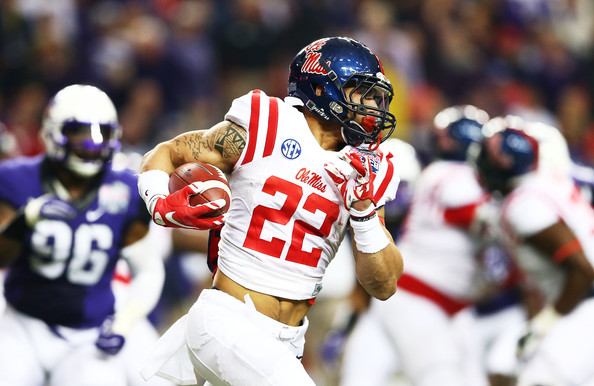 Defensive back Mike Hilton and running back Jordan Wilkins were both injured during Mississippi spring practice this week.

Hilton suffered a broken thumb, which will keep him out of the remaining spring practices. Wilkins sprained his MCL and he is considered “day-to-day.” Another running back, Eugene Brazley, suffered a concussion.

Hilton should be ready to go by summer and that is good news for the Ole Miss defense. Hilton started all 13 games for Ole Miss in 2014 and was the team’s leading tackler at 71. He also had 4 tackles-for-loss and 3 interceptions. For his career Hilton has 156 tackles, 2 sacks, 13 tackles-for-loss, 3 forced fumbles, and 4 interceptions in 36 career games. He will be a senior in 2015.

Wilkins redshirted in 2013 before seeing plenty of action in 2014. He played in all 13 games while recording 361 yards and a touchdown on 52 carries as the team’s second leading rusher behind Jaylen Walton. He also had 1 catch for 6 yards.

Brazley saw limited action in 5 games, but had 128 yards on 26 carries. He also caught 2 passes for 14 yards out of the backfield.