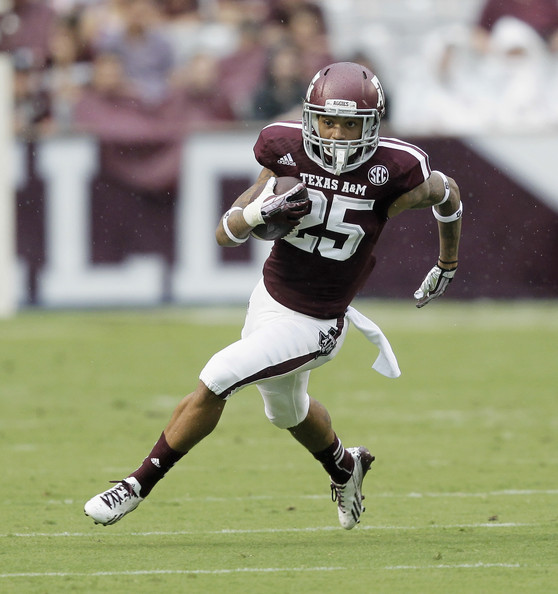 Texas A&M wide receiver LaQuvionte Gonzalez took to Twitter on Monday to announce that he is transferring from the school.

The Tweet reads, “Thank you to Texas A&M University Coaches & Fans for believing in me I Thank God For Giving Me the Opportunity To Play Here But I Have Decided To (TAKE MY TALENT ELSEWHERE).”

Gonzalez was a backup wide receiver for the Aggies. In 2013, Gonzalez played in 13 games while recording 21 catches for 240 yards and a touchdown as a true freshman. His 240 receiving yards were fifth best on the team that year. Gonzalez also returned 8 kickoffs for 164 yards (20.5 average).

2014 saw Gonzalez feature much less in the offense. He played in 8 games but only tallied 5 catches for 77 yards and a touchdown and also returned 2 punts for 32 yards. In addition, he returned 3 kickoffs for 63 yards, which gave him a total of 172 all-purpose yards in 2014.

The Aggies are immensely talented the wide receiver position, which will make the departure of Gonzalez negligent. Josh Reynolds, Ricky Seals-Jones, and Speedy Noil all return and were the second, third, and fourth leading receivers last season respectively.