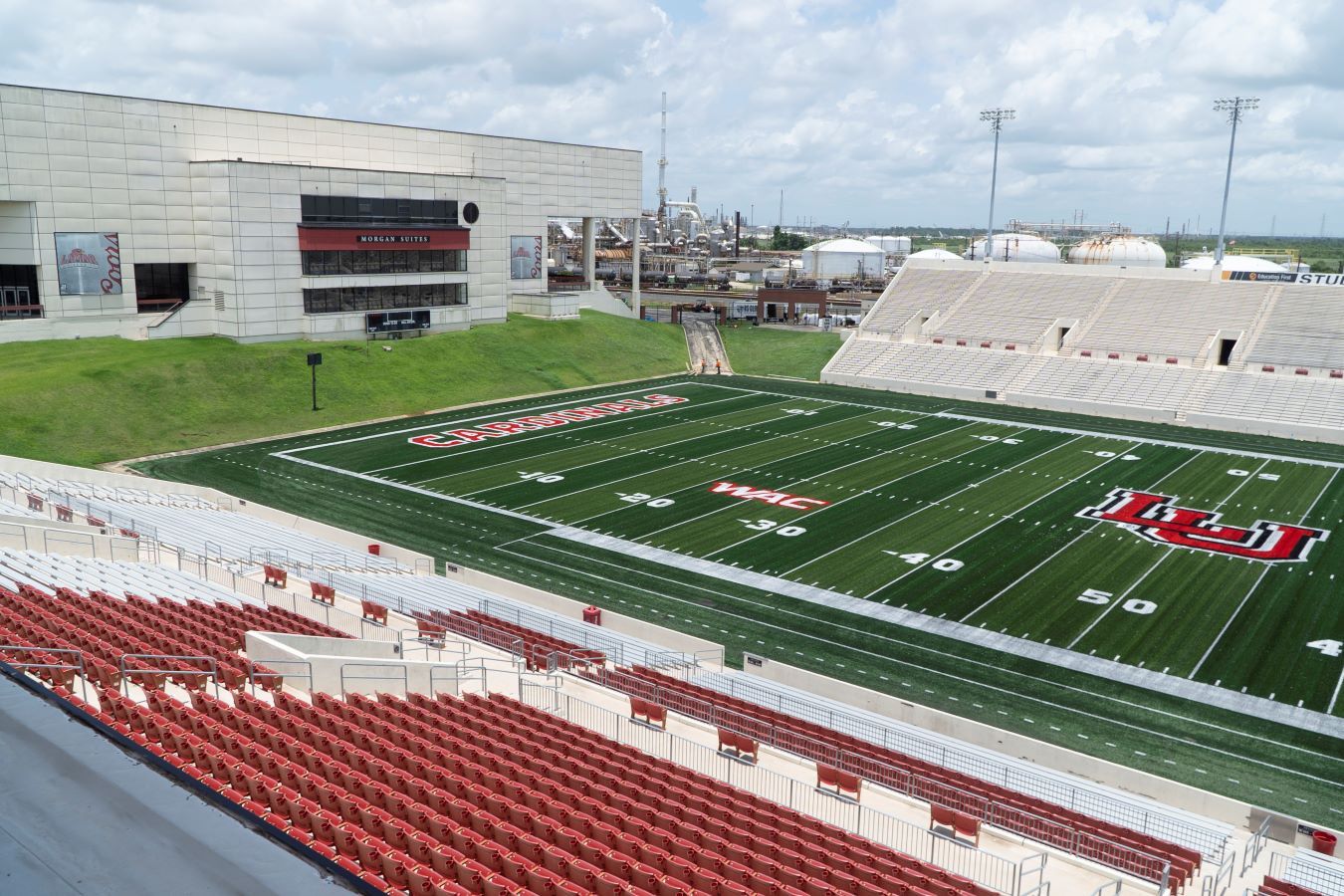 The last 12 months of realignment in college sports have been incredible with two of the biggest schools in Oklahoma and Texas decided to leave the Big 12 and join the SEC. In response, the Big 12 invited BYU, Cincinnati, Houston, and UCF to replace the Sooners and Longhorns.

On the other side of Division 1, the MEAC, Ohio Valley, and Southland conferences were all hit with multiple members leaving for greener pastures. The result of those losses is the return of the WAC and the beginning of football in the ASUN starting in 2022 at the FCS level. On top of that, both the WAC and ASUN may be eying a jump to the FBS – or at least a return in the case of the WAC.

For the ASUN, some reports state they will attempt a move to the FBS as soon as 2-3 years after starting football. That puts them around 2024 or 2025 but more time may be needed. The WAC had a longer timeframe with a rough estimate closer to 2030. Before we get to the obstacles on an entire conference moving from the FCS to FBS, let’s set the stage with the current membership in each conference as it relates to football for the 2022 season.

Below is a table showing each member in the ASUN and WAC. We have included the necessary details on full Division 1 eligibility and identified teams that will play in other conferences as affiliate football members. All information is based on the start of the 2022 football season as of the latest realignment news on October 7, 2021.

In 2022, the ASUN will have 6 eligible football members as Liberty will be an FBS team and Stetson plays in the non-scholarship Pioneer Football League. The WAC has 5 eligible football members for 2022 as Dixie State and Tarleton State are currently in the transitional phase to become fully eligible Division 1 members. New Mexico State plays an FBS independent team while UTRGV still hasn’t formally started a football program.

These two conferences have made great strides in the last 12 months going from not sponsoring any football to nearly having automatic qualifier status for the 2022 FCS Playoffs. We can expect the WAC to add at least one more football-playing school to get to 6 eligible members and attain the FCS AQ status. Going from FCS to FBS will take a bit more work and some luck.

What are the Current NCAA Rules for Moving Between FCS and FBS?

So what needs to be done by the ASUN and WAC to move up from the FCS to the FBS? Let’s consult the Division I manual, which requires us to look at two different aspects. First, we will look at what it says about conferences as a whole followed by an examination of the rules for each institution.

Regarding conferences in the FBS, section 20.02.6 on Football Bowl Subdivision Conferences (page 407) states:

In short, each conference needs to have 8 Division 1 eligible members, all of whom have to sponsor at least 6 men’s sports and at least 8 women’s sports including men’s and women’s basketball in addition to football. All members of the ASUN and WAC currently offer those sports.

If both conferences wait until later in the decade, there should be no issues with fully eligible members except for the ASUN. The ASUN would have only 7 full members as Stetson is in the PFL and there is no expectation of them joining the conference in football. The ASUN would need an 8th member to be eligible as an FBS conference, which wouldn’t be a difficult task. At worst, they’d get another FCS team who’s already a full D1 member and has grand visions of FBS football.

So everything comes down to signing some papers, crossing the t’s, and dotting the i’s, right? C’mon now. This is the NCAA we’re talking about. Section 20.4 shows that the devil (aka the NCAA) is in the details.

In essence, this becomes a circular argument that works against the ASUN and WAC. FCS teams need an FBS conference to invite them but the FBS conference – whether the ASUN or WAC – needs those 8 members to be considered a conference. There’s no winning formula based on the NCAA bylaws.

Two factors are working in favor of the ASUN and WAC if they want to go to the FBS. First, the NCAA’s power has been weakened considerably in recent years by member schools and the courts. Secondly, the NCAA might be willing to provide a waiver for either conference (or both). Bolstering the possibility of a waiver is that Liberty went from the Big South in the FCS to FBS independent status without a formal invitation from an FBS conference so the precedent is there although it hasn’t been seen applied to an entire conference.

Instead of taking yet another L in the courtroom and in terms of public perception through a protracted legal battle, the NCAA may opt to let the ASUN and WAC become FBS conferences. Dealing with the NCAA is always difficult because the NCAA doesn’t always make consistent or rational decisions.

For the sake of this article, let’s say the ASUN and WAC both become FBS conferences. What other requirements are needed to be an FBS program?

At least 16 varsity sports must be offered by each school. Of these 16, two men’s/mixed and two women’s offerings must be a team sport. No fewer than 6 men’s sports and no fewer than 8 women’s sports can be offered. The table on page 428 of the NCAA Division I manual provides an overview of the sport requirements. Another requirement is that 90% of the maximum allowed football grants per year have to be used during a two-year period AND offer at least 200 grants-in-aid or $4 million in aid to student-athletes.

The biggest potential obstacle is the attendance requirements. Currently, FCS teams do not have an attendance requirement but FBS schools need to average at least 15,000 in actual or paid attendance for all homes games in a season over a two-year period. This presents a huge discrepancy at the FCS level since teams could have small 5,000 seat stadiums or larger 25-30K capacity stadiums.

Given the stadium requirements to be an FBS program, it begs the question: what are the current capacities of the ASUN and WAC stadiums? We’re glad you asked! The table below shows each team, stadium, and listed capacity.

Of the 16 teams listed above, only five have a listed capacity of 15,000 or more. The duo of North Alabama and Stephen F. Austin would have no problem getting an additional 1,000 from standing-room-only tickets, which means about half the teams can accommodate the minimum home attendance needed to be an FBS program. Excluding UTRGV, the other 8 teams would need additional seating to reach the 15,000 per home game attendance requirement. Some are closer than others but to be at the FBS minimum, a serious investment would be required.

There is a recent FCS to FBS transition that can provide a rough estimate of what to expect. Coastal Carolina started its football program back in 2003 with a 6,400 seat stadium. When the Chanticleers left the FCS after the 2016 season, they had a 9,200 seat stadium and the expansion to double the capacity cost $32 million. Liberty expanded its stadium in 2010 going from 12,000 seats to 19,000 at a cost of $22 million.

Even a conservative estimate to renovate or expand a stadium to reach 15,000 capacity would be around $15 million. This is a significant cost especially at the lower end of the FBS food chain, which might see a minimal return on investment. Given the lower TV and media rights revenue at the bottom of the FBS, this type of investment would take years or decades to pay off. (It is possible schools could receive large gifts, sponsorships, and donations to ease the cost burden of stadium expansion).

Keep in mind this is just to get to 15,000 in attendance. Some stadiums may need major renovations if they plan to move up to FBS to attract athletes and donors, sponsors, etc. Becoming an FBS program doesn’t absolve any of the existing problems that may not be a high priority at the FCS level.

The ASUN and WAC might have FBS aspirations but they also have some hurdles to clear. First, they need to reach 8 minimum fully eligible Division 1 football members. Given the potential timeframe could be circa 2030, that leaves a lot of time for schools to join but the conferences also need to retain members to keep the FBS dream alive.

Secondly, both conferences will need to either get the NCAA Bylaws changed or a waiver from the NCAA. A legal battle isn’t out of the question either especially if both conferences feel they have a chance against a weakened NCAA entity. Another aspect schools need to worry about is having a minimum of 16 varsity sports. In most cases, this won’t be an issue although some schools will need to add a few sports to reach the requirement.

Finally, all members will be required to have a stadium capacity of 15,000. Of all criteria, this one has the potential to cause the most issues. Some schools may not be ready to put forth such a large investment especially at a time when there is a growing gulf between the Power 5 and Group of 5 teams. While moving from the FCS to FBS can provide more brand visibility (more sponsorship, donors, TV revenue, applications, student admissions, etc.), it needs to outweigh the cost of stadium expansion.

If all schools are not on board with the idea of moving up to the FBS, then this plan becomes difficult to achieve. While the ASUN and WAC have likely vetted each school to ensure they are willing to make the move, a lot can change in a decade. If realignment has taught us anything, it’s that schools always believe there are greener pastures and that’s all it takes for a long-term strategic objective to fall apart.

Overall, moving an entire conference from FCS to FBS has some serious roadblocks. However, these are not impossible to traverse or find a successful path forward especially compared to a decade ago. It will come down to ensuring all schools are committed to the move AND willing to make the necessary investments. In collegiate realignment, there is no guarantee those will happen.