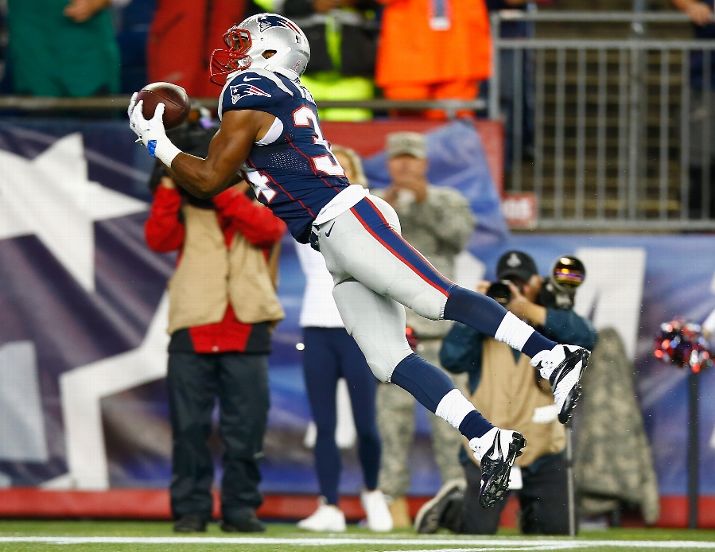 Chris Jones blocked a field goal on the last play of the game to give the New England Patriots the 27-25 victory over the New York Jets in a thrilling game between the two teams.

The game started well for the Pats with their first drive going for a touchdown. Tom Brady hit Shane Vereen on a 49 yard touchdown pass on a simple go route as the defense was in shambles to make it 7-0.

The Jets responded with an excellent drive of 72 yards in 12 plays, but only came away with a 22 yard field goal to make it 7-3. That would be the theme for the Jets early on in this game. After a three and out for the Pats, the Jets got another field goal from Nick Folk, this time it was from 47 yards out and the score was 7-6 in favor of the Patriots after one quarter.

The Jets third drive ended with, you guessed it, a third field goal from Folk. The Patriots responded with a touchdown thanks in large part of Brady slinging the ball around. He eventually found Vereen for a 3 yard touchdown, his second touchdown catch of the game to make it 14-9. The Jets, however, were not done with the field goals as Folk hit his fourth of the game on the ensuing drive to make it 14-12 Patriots.

The Patriots had one last chance for points and Stephen Gostkowski made sure the Patriots took a 17-12 lead into the break with his 39 yard field goal.

The second half was much the same as the first with the Jets giving the Patriots all they could handle. The third quarter started with a statement drive from the Jets as they went 80 yards in 11 plays and took the lead on Chris Ivory‘s one yard dive over the top of the pile. The Jets took a 19-17 lead after opting for the extra point.

The Pats quickly drove down to the Jets’ 3 yard line, but back-to-back penalties left them with a third and goal from the 19. That did not matter as Brady scrambled to his left on third and goal and hit Danny Amendola with a beautiful pass over the cornerback to take a 27-19 lead.

Once again, the Jets mustered an answer. They drove 86 yards on 12 plays with Geno Smith‘s 10 yard pass to Jeff Cumberland making it a 27-25 game. Smith’s pass on the two point conversion was too high and the deficit remained at two points with 2:31 left in the game.

With 1:06 remaining, the Jets go the ball back at their own 12 yard. An efficient drive by Smith ended with Folk’s 58 yard field goal attempt. That would be blocked by Chris Jones and the Patriots managed to survive against their arch-rival and AFC foe.

Geno Smith had a solid game by going 20 of 34 for 226 yards with a touchdown. Early in the fourth quarter, Smith’s left leg was rolled up on and he was in serious pain, but he only missed one play before coming back in. Smith was sacked three times for a loss of 21 yards, but he was effective running with 37 yards on 7 carries and picked up several key first downs.

Chris Ivory ran with passion and he finished with 107 yards and a touchdown on 21 carries. Chris Johnson had 61 yards on 13 carries and was featured in the wildcat formation several times throughout the game.

Eric Decker led the Jets with 4 catches for 65 yards while Jeff Cumberland had 3 catches for 50 yards and a touchdown.

Tom Brady had another good game though the completion percentage was low. He went 20 of 37 for 261 yards and 3 touchdowns. Brady had one sack for a loss of a single yard.

Shane Vereen had 11 carries for 43 yards in place of Stevan Ridley. Jonas Gray was signed off the practice squad and ran 3 times for 12 yards.

Vereen was also the leading receiver with 5 catches for 71 yards and 2 touchdowns. Rob Gronkowski had 5 receptions for 68 yards while Brandon LaFell caught 4 passes for 55 yards. Julian Edelman had 4 catches for 44 yards, but uncharacteristically dropped several passes when he was wide open.

New York (1-6) continues their slide with their sixth straight defeat. They have 10 days to prepare for another AFC East rival in the Buffalo Bills on October 26.

New England (5-2) has now won three in a row and have a few tests in the coming weeks. On October 26, they take on the Chicago Bears at home and then follow that up on November 2 with another home game against the Denver Broncos. The Pats have a bye during Week 10