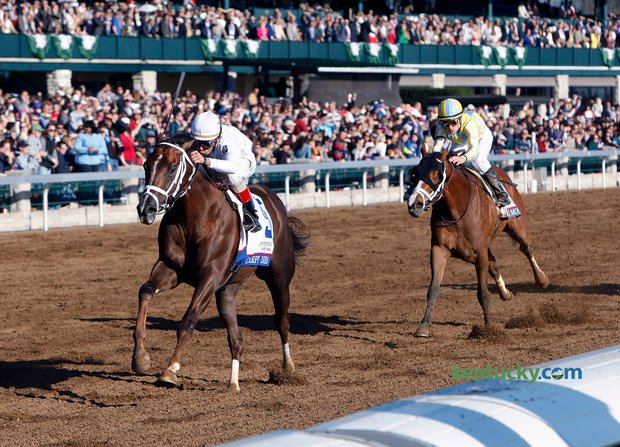 It was smooth sailing for Carpe Diem in the Grade 1 Blue Grass. He pressed the pace and then drew away in the stretch to win by 3 lengths over Danzig Moon.

Ocho Ocho Ocho went straight to the lead as expected and Carpe Diem was right there on his flank from the start. Gorgeous Bird sat third by 2 1/2 lengths, Classy Class was fourth, and Danzig Moon was in fifth. Pepper Roani was sixth, Frammento was seventh by 9 lengths, and Unrivaled was well behind in last by 11 lengths.

The top two continued to go around the turn and on the backstretch with little inclination to push forward too quickly. Gorgeous Bird still sat third on the backstretch and entering the far turn with Classy Class poised to go past him on his right flank. Danzig Moon was fifth, Pepper Roani was sixth, Frammento was seventh, and Unrivaled was still last.

Entering the stretch, Carpe Diem was given his queue to go to the front and he did just that with little threat from the other runners. Ocho Ocho Ocho continued to battle after setting the pace, but finished third behind Danzig Moon. Frammento made enough of a rally to finish fourth by 7 1/4 lengths.

Classy Class finished fifth, Gorgeous Bird was sixth, Unrivaled finished seventh, and Pepper Roani was last of eight by 14 1/2 lengths. The full chart can be found here via Equibase.

Carpe Diem is by Giant’s Causeway out of the Unbridled’s Song mare Rebridled Dreams. He was ridden by John Velazquez and is trained by Todd Pletcher. He paid $2.80 to win as the 2 to 5 favorite. He also paid $2.40 to place and $2.10 to show.

The final two races on the Road to the Kentucky Derby will be next week with the Grade 1 Arkansas Derby from Oaklawn Park and Grade 3 Lexington Stakes from Keeneland.