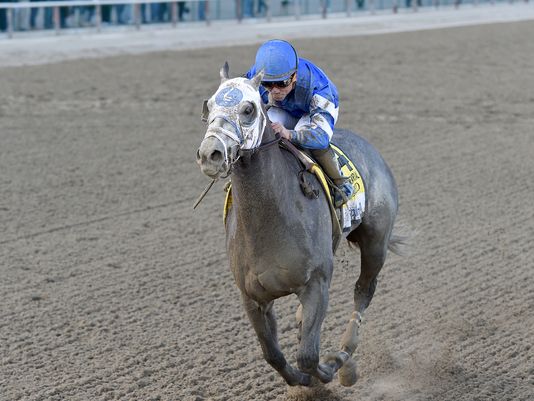 A wide trip by Frosted was not a problem as he drew away in deep stretch to win the Grade 1 Wood Memorial by 2 lengths.

Toasting Master broke best and went to the lead with Daredevil right there a length behind. Tencendur had a good spot in third, Tiz Shea D was fourth, and El Kabeir was near the back in fifth. Frosted was sixth, but three wide on the first turn with Lieutenant Colonel in last, but only 5 lengths off the lead.

Toasting Master continued to lead on the backstretch while Daredevil crept closer and Tencendur still in third. Tiz Shea D was fourth, Lieutenant Colonel made an inside move to move into fifth, Frosted was still in sixth, and El Kabeir was back in last.

Frosted started to make his move on the far turn when he went four wide, but he still had to catch Tencendur who got the first jump on the leader. It took until mid-stretch for Frosted to get the upper hand, but he pulled away to a 2 length win in the end.

The Road to the Kentucky Derby ends next weekend with two races. The Grade 1 Arkansas Derby from Oaklawn Park and the Grade 3 Lexington Stakes from Keeneland.