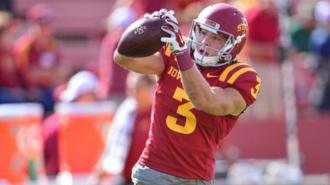 Two Iowa State players were arrested over the weekend including the son of head coach Paul Rhoads. Jake Rhoads was arrested on Saturday night and charged with public intoxication, according to the Ames Tribune. Rhoads is 20 years old.

The other player arrested was defensive tackle Terry Ayeni. Ayeni was arrested early Sunday morning and charged with disorderly conduct.

“We are aware of the situations involving our student-athletes,” said Paul Rhoads in a statement. “We are now in the process of gathering more facts and information.”

Rhoads walked on to the football team and redshirted in 2013. He did not play in 2014 while he was a member of the scout team. He will be a redshirt sophomore in 2015.

Ayeni transferred to Iowa State from New Mexico Military Institute. He tore his ACL in the summer of 2014 and redshirted the season. He was expected to contend for significant playing time at defensive tackle prior to his injury last summer.