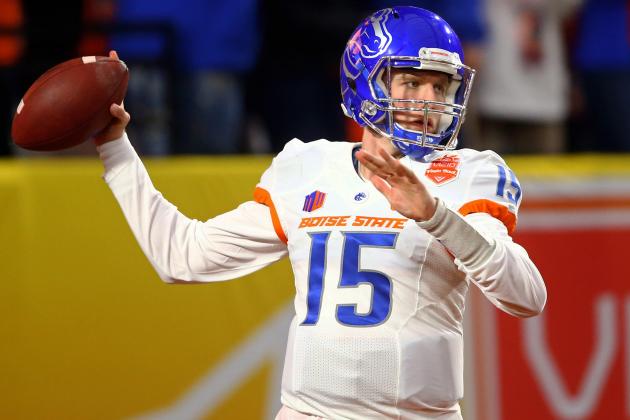 Boise State quarterback Ryan Finley was arrested early Saturday morning and charged with two misdemeanors, according to the Idaho Statesman.

Finley was charged with a minor in possession of an alcoholic beverage and resisting or obstructing officers.

Per the Statesman, Boise State said it is aware of the arrest and will follow the student conduct policy in accordance with the situation.

The police report, in full, is below.

“Boise Police officers responded to a neighbor’s call of a noise complaint at a residence near the intersection of West Hale Street and South Euclid Avenue at 11:32 p.m. on Friday, April 24. When officers arrived in the area, they observed a car pull up near the intersection and stop. The occupants of the vehicle got out, but then got back into the car when they saw officers. When Boise Police officers attempted to make contact with the driver, one of passengers exited the car and ran away, failing to stop when officers identified themselves. A brief foot pursuit ensued, and officers soon located the man who ran, Finley, crouched in the backyard of a residence near West Hale Street and Manitou Avenue. When officers spoke with the suspect, they observed an odor of alcohol coming from him, and noticed that he had glassy eyes. Officers took Finley into custody and transported him to the Ada County Jail where he was booked under the above charges.”

Finley is considered the front runner to win the starting quarterback job and replace Grant Hedrick. While that may still be the case, he may have to wait a little longer with this development.