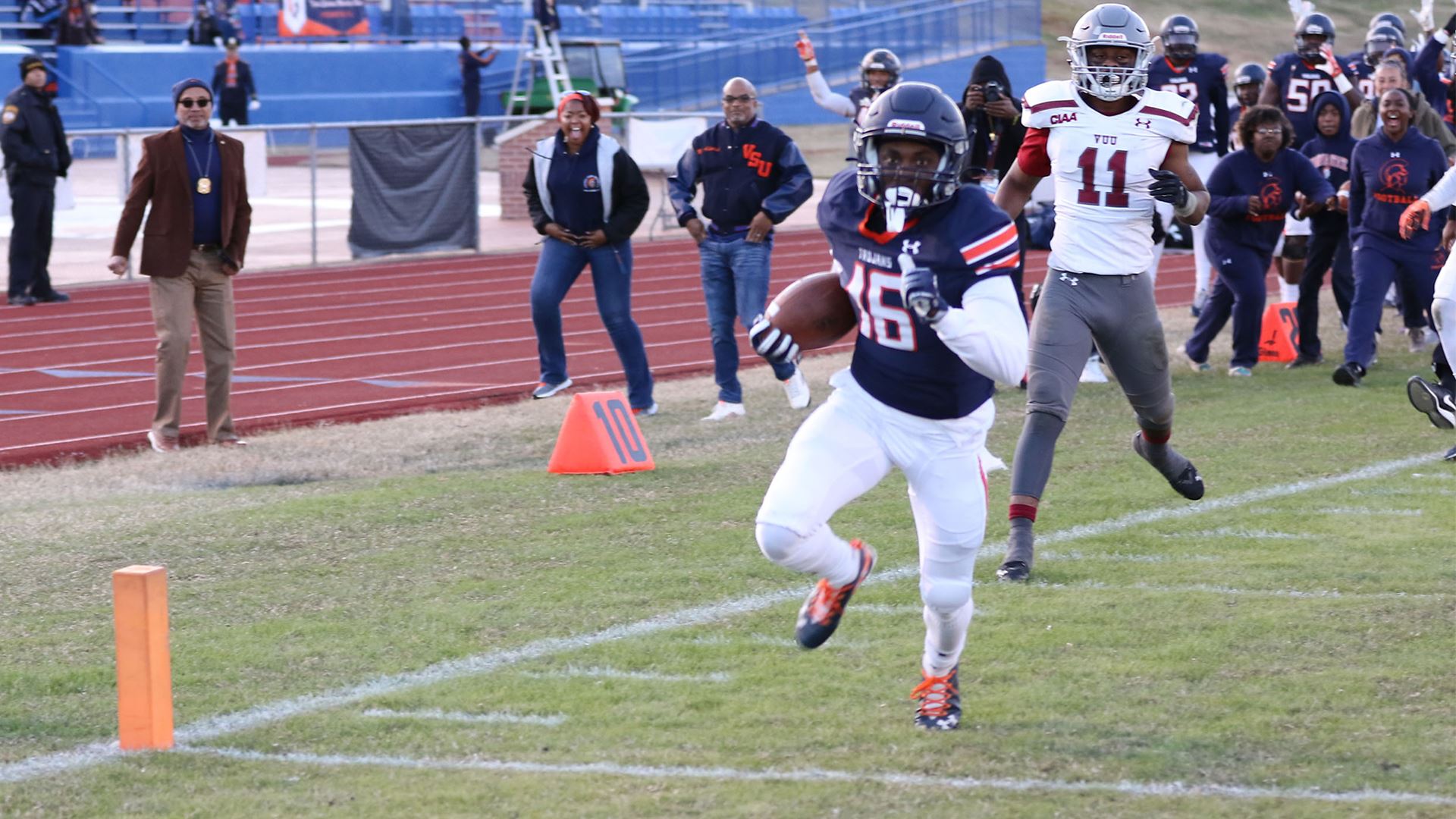 Rev up the realignment engines because the MEAC is part of the latest college realignment news in what has been an extremely busy week of college athletics news. HBCU Sports is reporting that Kentucky State and Virginia State – both NCAA Division 2 members – are considering a move up to Division to join the MEAC.

The MEAC is an obvious candidate for large-scale expansion after they have seen a mass exodus from its own ranks. The conference has lost five members in the last several years starting with Hampton leaving for the Big South after the 2018 season followed by Savannah State returning to Division 2 a year later. 2020 was a miserable year as the North Carolina A&T announced they will bolt for the Big South while the Florida duo of Bethune-Cookman and Florida A&M announced a move to the SWAC. All three of those programs are leaving in July after the current 2020-21 academic year is completed.

The losses have left 8 schools in the conference with only 6 football-playing members. Importantly, the MEAC needs to have at least 6 programs to maintain an automatic qualifier for the FCS Playoffs. Both Kentucky State and Virginia State sponsor football, which would provide a small buffer in case of further defections while also allowing them to consider further expansion. It is important to note that these two schools would not count towards the AQ amount for at least three seasons after they begin the transition to the NCAA Division I level.

With the much-needed context out of the way, let’s provide some analysis of the two schools as well as some other options the MEAC may consider.

The Case for Moving to Division I

Kentucky State – located in Frankfort – is currently a member of the Southern Intercollegiate Athletic Conference, which is the same conference that Savannah State joined after leaving the MEAC in 2019. KSU would become the most-western situated program in the conference though not egregiously so. Nevertheless, travel would be less than ideal in the MEAC though they are familiar with that setup as a member of the SIAC.

Virginia State is located in Ettrick and is a member of the Central Intercollegiate Athletic Association and would be located in the middle of the MEAC geographical footprint. The map below shows the MEAC with the two potential members in orange and the 2021-22 membership in blue.

As shown in the table, the football attendance numbers would place the two newcomers in the middle part of the conference with potential for higher numbers going forward due to strong attendance numbers the MEAC usually puts up each year. It’s worth noting that neither Coppin State nor Maryland Eastern Shore offers football.

The Case Against Moving to Division I

So what’s the downside? Well, for the schools the cost of jumping up to Division I comes with a hefty price tag of $1.7 million for the NCAA Division I application fee alone. Then there’s the MEAC conference fee, which is reportedly $250,000 though the MEAC would waive the fee for both schools. The D1 fee alone would nearly amount to Kentucky State’s most recent athletic budget of $1.9 million. There’s also the 4-year timeline to becoming a full Division I member after starting the process, which means no sports teams would have access to NCAA postseason tournaments.

Additional money may need to be spent on facilities such as expanding the football stadium. Kentucky State has a football stadium capacity of 6,000 but additional seating would be needed to accommodate the higher MEAC attendance. The same could be said for Virginia State, which has a stadium capacity of roughly 8,000. VSU already has a good basketball arena while KSU would likely need to upgrade its arena a bit.

Moving up to D1 also means higher coaching salaries, additional administrative and compliance costs, an increase in scholarships, higher recruiting costs to maintain competitiveness at the D1 level, etc. that need to be factored in. On the flip side, there might be a bump up in donations, sponsorships, giving, and the increased TV/ticket sales revenue. However, given the outlays, would those increases in revenue be enough to justify the move up?

Finally, there is a precedent that moving up from Division 2 into the MEAC tends to end poorly. Morris Brown began a transition in 2002 from the SIAC to what was then referred to as Division I-AA (now FCS) and the MEAC. The college dropped athletics completely after the 2002-03 academic year as it faced numerous troubles.

Winston Salem State tried a similar move starting in the 2007-08 season as they were moving up to Division I from the CIAA. Midway through the transition process, the university announced it was returning to Division II for the 2010-11 season. The Rams cited increased expenses as the reasons for a return to the D2 level.

Just as Winston Salem State’s MEAC tenure was drawing to a close, Savannah State was beginning its own adventure. They joined starting with the 2010-11 season and would stay with the conference through the 2018-19 season. Like Morris Brown and WSSU, the Tigers were overwhelmed by the cost of Division I athletics and returned to the SIAC at the Division 2 level.

For the MEAC, they are in need of members but why not potentially look at other Division I conferences that have also seen membership losses. The Ohio Valley Conference and Southland Conferences have both seen multiple schools leave for the proverbial greener pastures. The OVC will have 10 member schools and 7 football-playing members.

The Southland in particular is in a similar spot to the MEAC as 5 schools will be leaving after the 2020-21 academic year and will have 8 remaining members. Also, like the MEAC, they will have 6 football-playing members making their FCS Playoff AQ status tenuous going forward. There are also plenty of rumors swirling that additional members may be looking to get out.

One scenario would be the MEAC poaching teams from the Southland or looking to the OVC for members (or vice versa). There could also be the potential for conferences to fold if additional members cannot be found leaving the current membership of the MEAC, OVC, and Southland to find new homes in this case.

Another scenario, admittedly far-fetched, would be creating a scheduling agreement like the one the ASUN and WAC will have for the 2021 season. In the event that neither conference has the minimum of 6 required members for AQ status, they could have the top 2 teams meet in a championship game to determine the AQ for the FCS Playoffs. This would require the blessing of the NCAA, which is always a gamble. They could also try to petition the NCAA for a waiver of the 6 school minimum though that would not be a viable long-term solution.

Finally, there are other options such as Chicago State desiring a move to the MEAC. We looked at Chicago State’s future options in-depth as they will need to find a new conference after their WAC membership ends in June 2022.

It’s understandable why the MEAC would go to D2 to find new members and shore up its ranks. The allure of being a D1 is strong and the MEAC offers an enticement to make those dreams a reality. However, it is still an expensive proposition for the D2 programs based on the Division I application fee alone before getting into all the other increased expenses that come with running a Division I institution.

Of the two teams mentioned in the report, Virginia State makes a lot of sense on paper. They have strong athletics at the D2 level, solid facilities, and sit in a perfect geographical location for the MEAC. However, they are struggling with a deficit near $26 million and declining enrollment numbers. They did get a generous gift of $30 million from MacKenzie Scott, which will help resolve some funding issues.

As for Kentucky State, it’s a bit harder to see them move up. Just 5 years ago, they were on the brink of closing due to budget cuts according to the university President. Whether that was hyperbole to receive as much state funding as possible or not, recent events and the pandemic make it even more unlikely they would make the move at this time.

While these two schools may or may not be future MEAC members, it’s good to know that the conference is at least searching for potential candidates. Getting them to commit and succeed at being a full-fledged Division I member is a different matter entirely as history has shown.