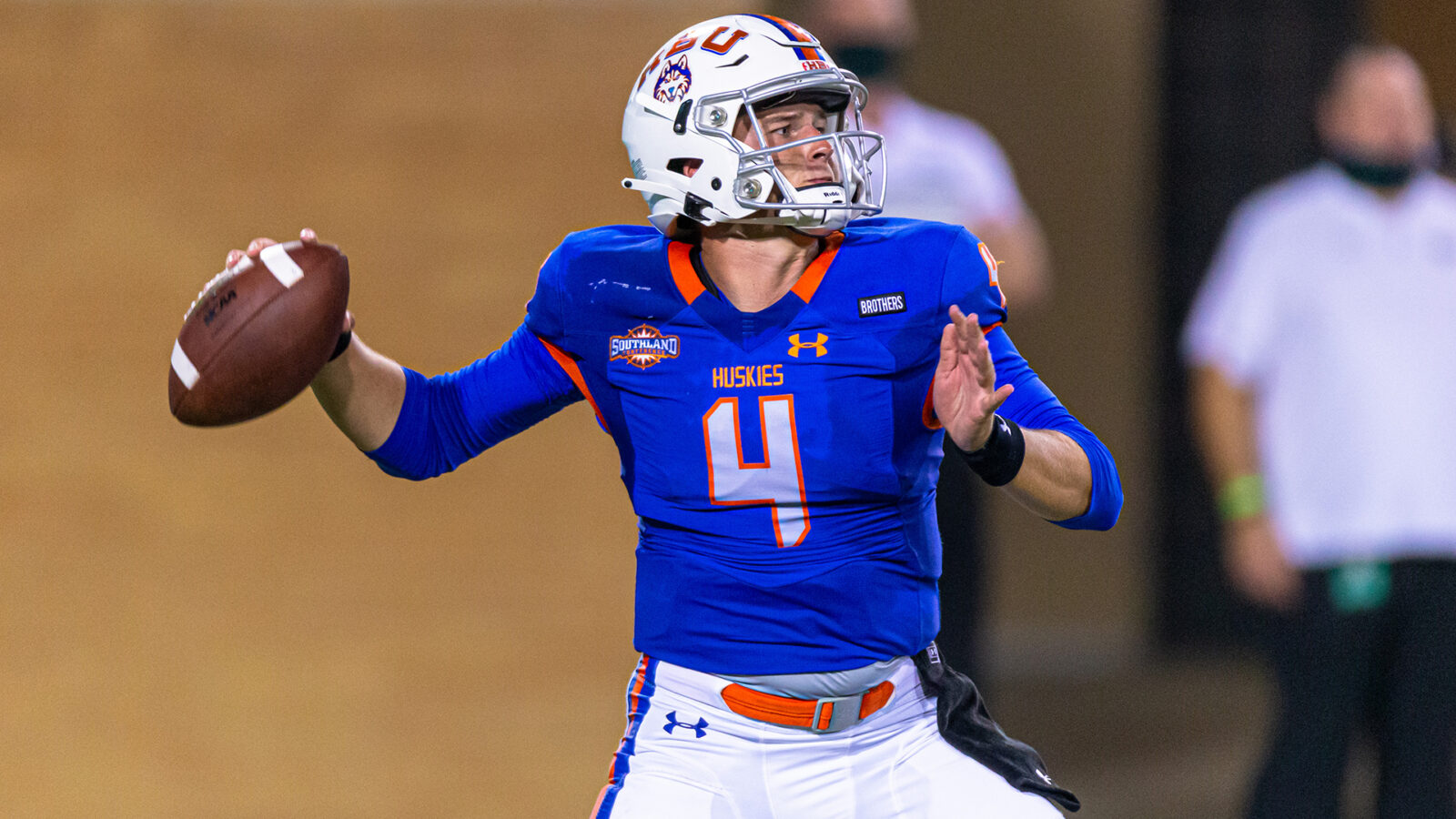 25. (MAC) Kent State Will Win the MAC East – There’s a lot to like about Kent State’s chances this season to make it to the MAC title game. First, they’re bringing back 10 starters on offense that averaged nearly 50 points per game last fall in a truncated 4-game season. Yes, a lot of teams have plenty of returning starters but Akron is the only other MAC East team to have 10 starters returning on offense. Akron’s record for the last two seasons was a combined 1-17. Kent State’s record over the same time? 10-7 including a 7-6 season in 2019 that saw them rip off four straight wins to end the season.

Another reason to be bullish on the Golden Flashes is the schedule. From the MAC West, they will face a tough road game at Western Michigan but they also drew winnable games against Northern Illinois (home) and Central Michigan (away). They face Ohio on the road and welcome Miami (OH) to Kent. With Ohio’s Frank Solich stepping down so close to the season, we think Kent State has the slight edge to claim the MAC East this season.

24. (MAC) Toledo’s Defense Will Give Up the Fewest Points Per Game – Toledo’s defense is expected to be stellar in 2021. They have all 11 starters back and nearly all of the two-deep from a unit that gave up 24.3 points per game in 2020 over the 6-game schedule. 2021 will also be the second year in the system under defensive coordinators Vince Kehres and Craig Kuligowski.

The schedule also works in the favor of the Rockets as they have Norfolk State, Massachusetts, Northern Illinois, Eastern Michigan, Bowling Green, and Akron on their schedule to help keep the point totals low. Toledo has a serious chance of winning the MAC in 2021 and the defense will be key in helping them achieve that goal.

* Note: this will be based on all games (both conference and non-conference) including the bowl game. We’ll have to wait until late December to see if this prediction is correct.

23. (C-USA) Western Kentucky Will Average At Least 40 Points Per Game on Offense – It’s been a while since the Hilltoppers had a high-powered offense. They averaged over 40 points and 500 yards per game three straight seasons under Jeff Brohm in 2014, 2015, and 2016. Since then, it’s ranged from mediocre to bad. Last season saw the offense sputter with 19 points per game during the 5-7 season as they averaged only 290 yards of offense per game.

So why the optimism for 2021? WKU basically brought in the entire 2020 Houston Baptist offense with the additions of quarterback Bailey Zappe, wide receivers Jerreth Sterns, Josh Sterns, and Ben Ratzlaff, and even brought in HBU offensive coordinator Zach Kittley. Add in fellow transfers Daewood Davis (WR) from Oregon, Zac Lefebvre (TE) from Buffalo, Adam Cofield (RB) from North Dakota State, plus all the other returning talent, and this WKU offense looks incredibly potent.

There is a small caveat to this prediction: how will all the transfers actually perform? On paper, it looks like this offense should outscore most of its opponents. In reality, the step up from FCS to FBS is noticeable, the on-field timing of transfers isn’t always smooth, and this year in particular, has a lot of returning talent all around C-USA (and the entire college football landscape).

22. (C-USA) UAB Will Win C-USA Championship – What’s not to love about Bill Clark and his tenure at UAB? In his five seasons at the helm of UAB, he hasn’t had a losing record and is a dominant force at home. He’s made three straight C-USA Championship Games and won two of those. So what does he bring to the table this year?

Only a formidable team that will open a brand new stadium in October as part of its football renaissance. 8 starters return on offense including both quarterbacks that were utilized last season. UAB did lose its top rusher and top two receivers from last season, which is a big concern. However, they return the entire front five and that should give Tyler Johnston time to throw and the numerous running backs plenty of holes to break some tackles.

UAB’s defense has been very steady the last three seasons. They have held opponents under 22 points and 315 yards in each of the last three seasons and now they have 9 starters back to improve those numbers. In 2020, they had 8 starters back, who allowed only 21.4 points and 311 yards per game. The depth, talent, and coach are back again to make this the strength of the squad.

As usual, the schedule is what will make or break this prediction and UAB will be tested this season. From the East, they will have to play against Florida Atlantic (home) and Marshall (road), which are two of the better teams from the division. They also have to play West foes Southern Miss and UTSA on the road while only getting Louisiana Tech at home.

It’s not the easiest accomplishment for UAB but they have a very talented roster and excellent coaching to guide them for the 2021 season. That’s why we think they’ll be playing for the C-USA Championship for the fourth straight season and win it for the third time in that span.

21. (Independents) Connecticut, Massachusetts, and New Mexico State Will Win Fewer Than 10 Games Combined in 2021 – Our last prediction for this article is a three-in-one special. When looking at the returning starters, the schedules, and the circumstances for each team, it is difficult to foresee these three schools combining for a double-digit win total.

Connecticut hasn’t played a football game since 2019, which is far from ideal and they return 14 starters from that squad (7 on each side of the ball). The main issue outside of any recent game experience is the schedule. They have 2 FCS opponents in Holy Cross and Yale while also playing a road game at Massachusetts on October 9. Where else might they be able to pick up a win? 3 wins appear to be the ceiling for UConn unless they manage to pull off a shocker elsewhere.

Massachusetts played in only 4 games last fall and 8 starters are returning on each side of the ball. The problem with that? The offense averaged 3 points a game while the defense surrendered 40 points per game. In fairness, those 4 games were all on the road and against stiff competition (Georgia Southern, Marshall, Florida Atlantic, and Liberty). The Minutemen still face the same issue as UConn in the scheduling department: where will the wins come in?

They face FCS foes Rhode Island and Maine in back-to-back weeks in November as well as facing Connecticut at home and playing at New Mexico State to end the season. They also take on MAC West opponents Eastern Michigan and Toledo in the early half of the season. For UMass, the limit is 5 wins – at most – and that would mean defeating both UConn and NMSU, which would lower those two teams’ respective win totals.

New Mexico State is the last of the three teams and the most intriguing. They have only 3 starters returning with all of those coming on the offensive side of the ball. They also opted to play two games in the spring of 2021 to get additional practice time of 35 days instead of the normal 15 allowed by the NCAA as a result. However, those 2 games were against FCS competition in Dixie State and Tarleton State both of whom were in their first year of Division I competition.

The Aggies went 1-1 with a 7-point win against Dixie State and were throttled by Tarleton State 43-17. They only face one FCS opponent – South Carolina State – and the aforementioned UMass game to end the season. Like UConn and UMass, where else might they get a win? UTEP in the season opener? New Mexico in week three? Utah State in November?

UConn, UMass, and NMSU face a combined 5 FCS teams and UMass will play UConn and NMSU. That gets them to 7 wins combined but where else will these three teams win another 3 games? It’s not impossible to see them getting to 10 but it seems highly unlikely.