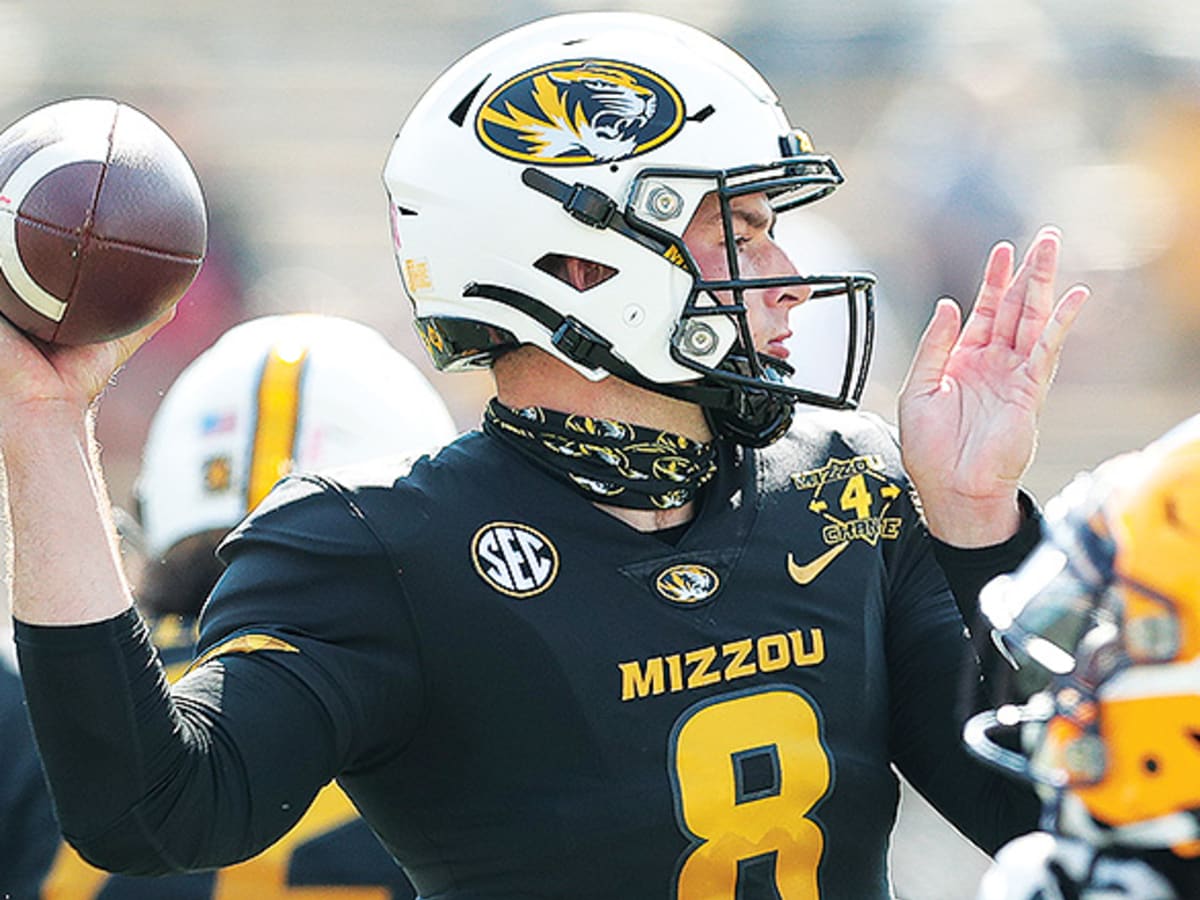 5. (SEC) Ole Miss Will Have the Highest Scoring Offense– Lane Kiffin’s first season in Oxford was decent. The offense was excellent averaging 39.2 points and 556 yards per game, Ole Miss made and won a bowl game, and they finished at .500 for the first time since 2017. The biggest weakness for Ole Miss was its defense, which surrendered 38.3 points and 519 yards per game both of which were the worst numbers in the SEC for 2020.

8 starters return on offense for Kiffin including quarterback Matt Corral. He threw for 3,337 yards and 29 touchdowns against 14 interceptions while completing a spectacular 71% of his passes. Corral also ran for 506 yards and 4 scores as the team’s second-leading rusher last year. The offense will once again be on his shoulders and legs.

Supporting Corral is four offensive linemen from last season as well as leading rusher Jerrion Ealy (745 yards and 9 touchdowns). He’ll be supported by Corral’s running ability as well as Snoop Conner (421 yards and 8 TDs) and Henry Parrish (263 yards and 2 TDs). There is plenty of experience in the backfield to meet and exceed last year’s 211 rush yards per game.

Corral will be missing his top target from 2020 in Elijah Moore. Moore had 1,193 yards and 8 touchdowns on 86 receptions. By comparison, the second-leading receiver had 524 yards and 6 touchdowns on 27 receptions and he also departs. The trio of Dontario Drummond (25 catches, 417 yards, and 7 TDs), Jonathan Mingo (27 catches, 379 yards, and 3 TDs), and Braylon Sanders (15 catches for 376 yards and 4 TDs) will take over and there is a lot of talent here. Having Corral throwing the ball and the experienced line will also help.

There are some other teams that will have stellar offenses. Alabama averaged 48.5 points per game in 2020 but only 3 starters return on offense for them. But it’s Alabama, which means they simply reload. It’s worth pointing out that the last time they had only 3 starters back (in 2015), they “only” averaged 35.1 points per game. Losing as much talent as well as offensive coordinator Steve Sarkisian will hurt the production for Alabama.

LSU is a contender to potentially have the most PPG. Last year, they had only 2 starters back and still put up 32 points per game. This season, LSU has 9 starters back on offense and if they remain injury-free at quarterback, they could be dueling with Ole Miss as the best offense.

Florida has been very good on offense under Dan Mullen and 2020 was no exception. The Gators put up 39.8 points per game with Kyle Trask manning the offense. This season will be different as Trask is gone and only five starters are back for Florida. Losing Trask as well as Kadarius Toney and Kyle Pitts will see the numbers fall.

We think Ole Miss is best positioned to have the best offense in the SEC in 2021 especially with Corral back and another offseason learning Kiffin’s offense.

4. (SEC) Missouri Will Reach 9 Wins – The Tigers went 5-5 last year and made the Music City Bowl before it was canceled. In the five losses, Missouri wasn’t particularly close in the end as all five games resulted in double-digit blowouts. Other than the Vanderbilt 41-0 blowout, Missouri had four close wins with none by more than 10 points.

The Tigers have 8 starters back including quarterback Connor Bazelak and leading receiver Keke Chism. Chrism led the team with 35 catches for 458 yards and 1 touchdown, which showed the lack of a number one guy but also showed the depth of the receivers. The offense lost Larry Rountree who ran for 3,720 yards in four years at Missouri and finished as the second-leading rusher in school history. The four offensive linemen returning will help clear the way for whomever the top tailback is in 2021.

The defense has 6 starters returning from a group that allowed 32.3 points and 408 yards per game. Four of those six starters return in the front seven in this 4-2-5 system, which makes this the strength of the team. There is some depth concern in the secondary, which could easily make this prediction silly. Still, being in the second season with Eliah Drinkwitz should see the overall numbers improve a bit.

We’ll know by the end of September if Missouri has a chance at 9 wins. They open with Central Michigan (home), Kentucky (away), Southeast Missouri State (home), and Boston College (away). At 4-0, this prediction would have a great chance of coming true. At 2-2? Then it becomes unlikely as Missouri would have to win 7 of its last 9 – assuming they make a bowl game.

In October, Missouri has three straight home games against Tennessee, North Texas, and Texas A&M before concluding the month with a road game at Vanderbilt. A 3-1 record in October is well within reason for Missouri. In November, the Tigers take on Georgia (away), South Carolina (home), Florida (home), and Arkansas (away).

They’re unlike to beat Georgia but games against South Carolina and Arkansas might see Missouri as the favorite. They also get Florida at home and we’ll know by November how good (or bad) the Gators are, which might present the opportunity for an upset. This prediction is going out on a limb but it has a chance if the Tigers have a good start to the season.

3. (Big 10) Rutgers Will Make a Bowl – Rutgers has not been very good as a member of the Big 10. They’ve had just one winning season and had three seasons without a conference win since 2016. Greg Schiano returned to the program in 2020 and guided them to a 3-6 record but they looked much improved – at least on offense. The offense doubled its points per game output (13.3 PPG in 2019 to 26.7 in 2020) while the defense was improved in terms of PPG but was slightly worse in yards allowed per game.

In 2021, Schiano will have 11 starters back on offense. After making big strides in 2020, this year won’t have the same big jump. However, they will likely be pushing above 30 points per game and close to 400 yards per game in the second season with Schiano and Sean Gleeson (OC).

There are 10 starters back on defense, which is both good and bad. They gave up 32.1 points per game last year, which was a 4.6 point improvement compared to 2019. However, they allowed 449 yards per game in 2020 compared to 434 the year before. There’s no reason for them to get worse this season, especially with Schiano’s emphasis on a strong defense.

Rutgers has three winnable non-conference games versus Temple (home), Syracuse (away), and Delaware (home). They open the Big 10 slate with Michigan (away), Ohio State (home), Michigan State (home), and Northwestern (away). If Rutgers is 4-3 entering the back half of its schedule, then they have a good shot at 6 wins.

Rutgers ends the season with Illinois (away), Wisconsin (home), Indiana (away), Penn State (away), and Maryland (home). The Scarlet Knights can bookend this stretch with wins to reach bowl eligibility but they could pull an upset along the way to make it 7.

2. (Big 10) Northwestern Will Win at Least 7 Games – Northwestern had a fantastic 2020 season going 7-2 and make its first Big 10 Championship Game appearance. They lost 22-10 to Ohio State but held Justin Fields in check although Trey Sermon ran wild. The Wildcats bounced back to win the Citrus Bowl against Auburn 35-19 to cap another solid campaign under Pat Fitzgerald.

Normally, this would seem like an “easy” prediction given the previous year but Northwestern has some serious factors working against them in 2021. First, only 8 total starters return in 2021, which is the lowest in the Big 10. That number was further reduced to 7 when running back Cam Porter was injured in pre-season and he will miss the entire season along with backup offensive linemen Zachary Franks.

In addition, the Wildcats will have a new quarterback at the helm in Hunter Johnson who won the job in training camp over Ryan Hillinski. Johnson was formerly the top high school recruit and committed to Clemson before transferring to the shores of Lake Michigan. Johnson started 5 games in 2019 and should know the offense well enough in his fourth year at Northwestern to ease the loss of Peyton Ramsey. On defense, the loss of seven starters, as well as defensive coordinator Mike Hankwitz, will hurt after they gave up only 15.9 points and 341 yards per game.

The schedule was incredibly kind to Northwestern this year. Northwestern has a chance to open 6-0 if everything goes their way. They play Michigan State (home), Indiana State (home), Duke (away), Ohio (home), Nebraska (away), and Rutgers (home). They end the season with Michigan (away), Minnesota (home), Iowa (home), Wisconsin (away), Purdue (neutral site), and Illinois (away). They managed to avoid three of the top four East teams in Ohio State, Penn State, and Indiana which is why we like Northwestern a bit more than we otherwise would have.

The first half of the season is far more manageable than the last half. A 6-0 start is possible but the Wildcats will likely need to be no worse than 4-2 to reach 7 wins. They have two winnable games against Purdue and Illinois in the second half while an upset isn’t out of the question. Assuming they reach a bowl game, they could be staring down an 8 win season if they pull out a shocker.

1. (Big 10) Wisconsin Will Win the Big 10 – Wisconsin went 4-3 last season in a mediocre season. They beat Wake Forest in the bowl game to salvage a winning season but the offense struggled to find consistency.

Defensively, Wisconsin was good in 2020. They allowed 17.4 points and 300 yards per game, which is expected from them. 8 starters return on this side of the ball and there’s no reason to expect a massive drop-off. The linebackers and secondary starters all return from last season making them the strength this season. Teams will find it difficult to move the ball on this group.

Wisconsin has some tough games in the Big Ten this season. They start the regular season with a home game against Penn State. Other tough games against Michigan, Iowa, and Northwestern are all at home as well. Their toughest road game this year is Minnesota in the regular-season finale and the Big 10 West may have already been decided by then.

To win the Big 10, the Badgers will need to exorcise some demons. Since the Big 10 went to the East/West divisional format, Wisconsin is 0-4 in championship games with three of those losses to Ohio State. The positive for Wisconsin is they’re expected to be excellent while OSU is in a “down” year. Of course, a “down” year for Ohio State is reloading as the offense lost its starting quarterback and running back from last year. The defense has only five starters back after 7 of the top 9 tacklers from 2020 left.

If there’s ever a year for Wisconsin to win the Big 10 and possibly not even play Ohio State in the title game, this year is it.

Bonus: FCS Teams Will Win at Least 8 Games Versus FBS Teams – One of the biggest themes for the 2021 season is that teams are returning a lot of starters. This applies to the FCS level too as some teams will have a lot of experience and talent back.

That concludes our 25 26 predictions for the 2021 college football season! We hope you enjoyed reading as these were posted and be sure to check back in January to see how well or poorly we did.

Photo courtesy of the Missouri Athletics