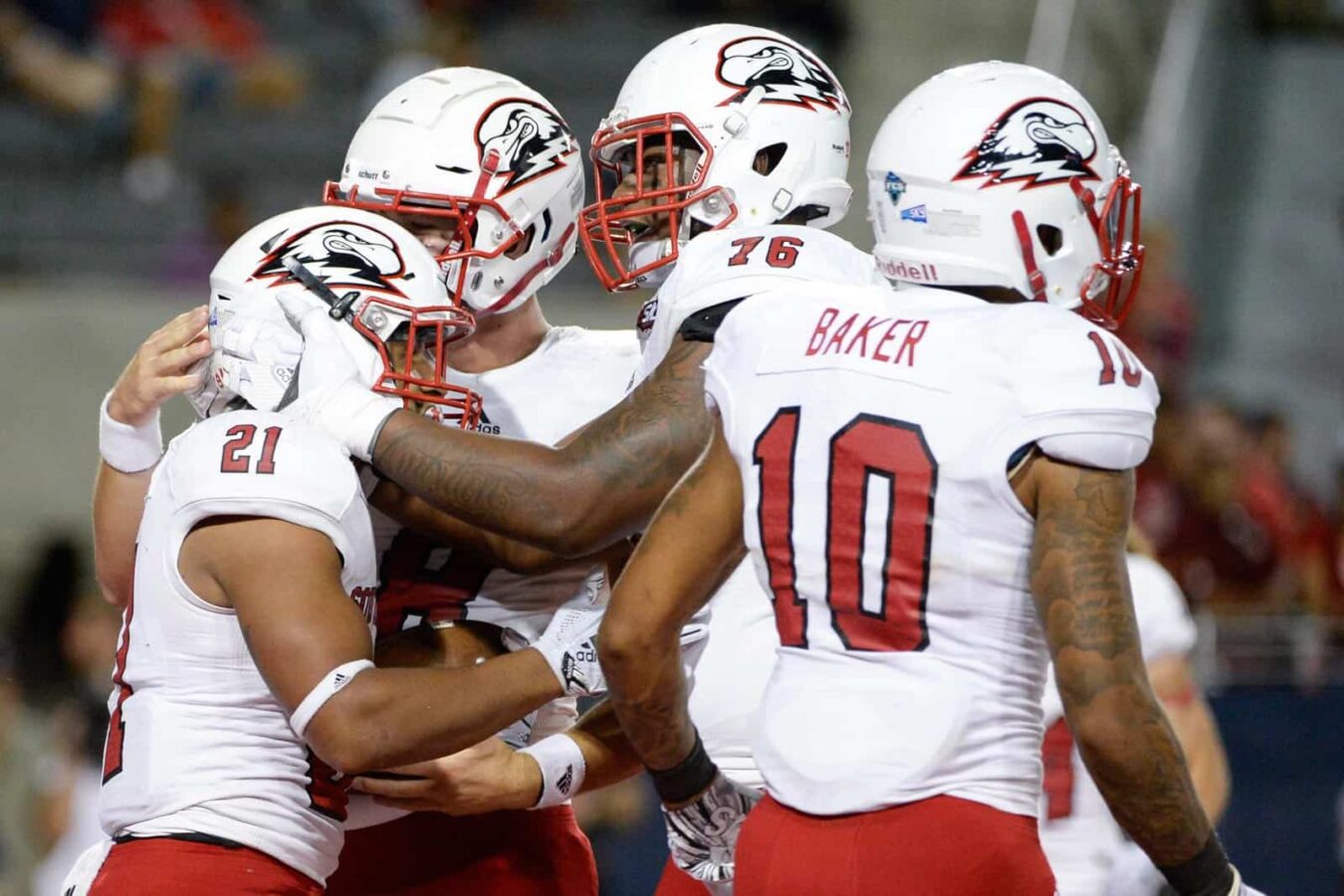 Editor’s note: This post has been updated as of Tuesday, October 26, 2021. Note that this list only reflects changes in effect beginning with the 2022-23 academic year. If you wish to see changes for the 2021-22 season, please see this post. This article will be updated throughout the 2021-22 academic year as more changes become known.

The 2021-22 academic year began on July 1 but we are already looking ahead to realignment for the 2022-23 academic year. The wheel that is college realignment never stops turning and we want to stay on top of the news with a single location of all the moves from Division I, Division 2, Division 3, and the NAIA.

If this post seems familiar to another list on this site, you would be correct. That list covered changes from 2019-20, 2020-21, 2021-22, and some of the other future realignment changes. Given the increasing number of entries, it was becoming cumbersome to list so many changes in one article. The list presented below will not cover anything from the current 2021-22 season or prior and the previous list will not be updated with any news for changes occurring in the 2022-23 academic year or later.

Let’s start with the biggest news to date: Oklahoma and Texas have decided to leave the Big 12 and are headed to the SEC. When will this happen? The SEC says the two schools will join starting in the 2025-26 academic year but it wouldn’t be surprising to see those two join sooner (no pun intended).

After the SEC move to bring in OU and Texas, the Big 12 responded by inviting BYU (football independent, West Coast Conference) and the AAC trio of Cincinnati, Houston, and UCF on September 10. The current plan is for these teams to join starting with the 2023-24 academic year. The AAC has already begun a search for the next members to invite as replacements for the departing trio.

There are other numerous changes at the Division I level and it starts with the ASUN, Big Sky, and WAC conferences. As part of the 2021-22 agreement between the ASUN and WAC, three full members of the ASUN – Central Arkansas, Eastern Kentucky, and Jacksonville State – will play the 2021 football season as WAC members. Those three teams will then become ASUN Conference football members beginning in 2022-23 when the ASUN sponsors FCS football for the first time.

In addition to the three teams next year, current Big South football members Kennesaw State and North Alabama will also move to the newly established conference after the 2021-22 season.

Southern Utah will join the WAC from the Big Sky following the 2021-22 academic year. There is also speculation that the University of Texas Rio Grande Valley may start a football program in time for the 2024 season. UTRGV is currently a WAC member in other sports. Finally, the WAC will see geographic outlier Chicago State leave the conference after the 2021-22 season. Chicago State has not yet announced which conference (if any) it will join starting in 2022-23 though the Division I path forward for Chicago State has many obstacles.

Hartford announced in May 2021 that they would drop from Division I to compete at the Division III level starting in 2025. That timeline is subject to approval from the NCAA. Hartford has yet to announce which Division III conference they will join.

9/17/21 Update: Austin Peay will leave the Ohio Valley Conference for the ASUN starting with the 2022-23 academic year. The Governors would be the 13th full member of the ASUN and the sixth FCS football member giving the league an automatic bid to the FCS Playoffs beginning in 2022.

9/25/21 Update: The OVC was dealt another blow with basketball powerhouse Belmont reportedly leaving to join the Missouri Valley Conference. Belmont is the fourth OVC team to leave within the last year joining Austin Peay, Eastern Kentucky, and Jacksonville State. The latter trio left to join the ASUN Conference. Belmont confirmed they would join the MVC on Tuesday, September 28, 2021.

Joining the D1 ranks will be Texas A&M-Commerce, which will reportedly leave the D2 Lone Star Conference and join the Southland Conference, according to Dan Wolken of USA Today. This would give the SLC 7 football members and 9 overall schools – assuming no other teams leave. Commerce would join the Southland starting in the 2022-23 academic year. Commerce confirmed the news on Tuesday, September 28, 2021.

10/21/21 Update: The AAC officially announced the addition of 6 schools from C-USA. Charlotte, Florida Atlantic, North Texas, Rice, Texas-San Antonio, and UAB will make their new home in the AAC. It is not yet known when the schools will join the AAC but the earliest they could start is in 2023-24 per Pete Thamel.

10/26/21 Update: The Sun Belt officially welcomed Southern Mississippi into the conference. The Golden Eagles will join no later than the 2023-24 academic year. Southern Miss is the first of four expected new members for the Sun Belt with James Madison, Marshall, and Old Dominion also expected to join.

Emory and Henry is joining Barton and Erskine Colleges in the SAC for the 2022-23 season. Emory and Henry spent the 2021-22 season as a Division II Independent after moving up from the Division III Old Dominion Athletic Conference. Anderson University (South Carolina) will be adding football with the intent to join the SAC as well starting with the 2024-25 season.

The University of the Sciences and St. Joseph’s University in Philadelphia, Pennsylvania signed a letter of intent to explore a merger of the two schools. USciences is a D2 member of the CACC while St. Joe’s is a D1 member of the Atlantic 10 Conference. In June 2021, St. Joe’s gave a timeline of 2022 for the deal to be completed, which likely means it will be in effect beginning with the 2022-23 academic year.

Post University (Waterbury, Connecticut) announced an intention to become a Division II member in football. They will be moving from a sprint football team into a to-be-determined Division II conference in the future.

The schools will continue to operate as a campus as an arm of the new institution and each campus will continue to use the current name. Each campus also plans to keep the athletics as separate entities instead of becoming a single sports team at the new institution. The new organization is expected to begin for the 2022-23 academic year and be completed in time for the 2024-25 academic year.

Thomas More (Crestview Hills, Kentucky) will leave the Mid-South Conference in the NAIA to move up to Division 2. They have been invited to the Great Midwest Athletic Conference and will submit a formal application in early 2022. Thomas More is currently planning to be a member of the GMAC starting with the 2022-23 academic year.

Mills College – based in Oakland, California – announced they would no longer be a degree-granting institution. Instead, they will focus on research after the 2022-23 academic year. Mills is a member of the Division 3 Coast to Coast Conference.

Southwestern University (Georgetown, Texas) announced a move from the American Southwest Conference to the Southern Athletic Association in a football-only move starting with the 2023-24 academic year. They will be the tenth football member of the SAA when they join in 2023 and will have some company as an affiliate member. Trinity University (San Antonio) is has been an affiliate member in football since 2017.

The Southern State Athletic Conference will welcome Life University (Marietta, Georgia) starting with the 2022-23 season. The Running Eagles will remain a member of the Mid-South Conference until the conclusion of the 2021-22 academic year.

Sierra Nevada University will become part of the University of Nevada, Reno as part of an agreement between the two schools. SNU participates at the NAIA level in the Cal Pac Conference. According to the press release from Nevada, this is the first step in the process and nothing will change for the 2021-22 academic year and any changes in athletics or full incorporation into the University of Nevada will happen at a later date.

Bismarck State is planning to join the NAIA in the future although has yet to set a definite timetable for the move. Bismarck State is currently a two-year college but will transition to a 4-year college along with the move to NAIA. The logical destination for Bismarck is the North Star Athletic Association.

2 thoughts on “College Sports Realignment for 2022 (and Beyond)”