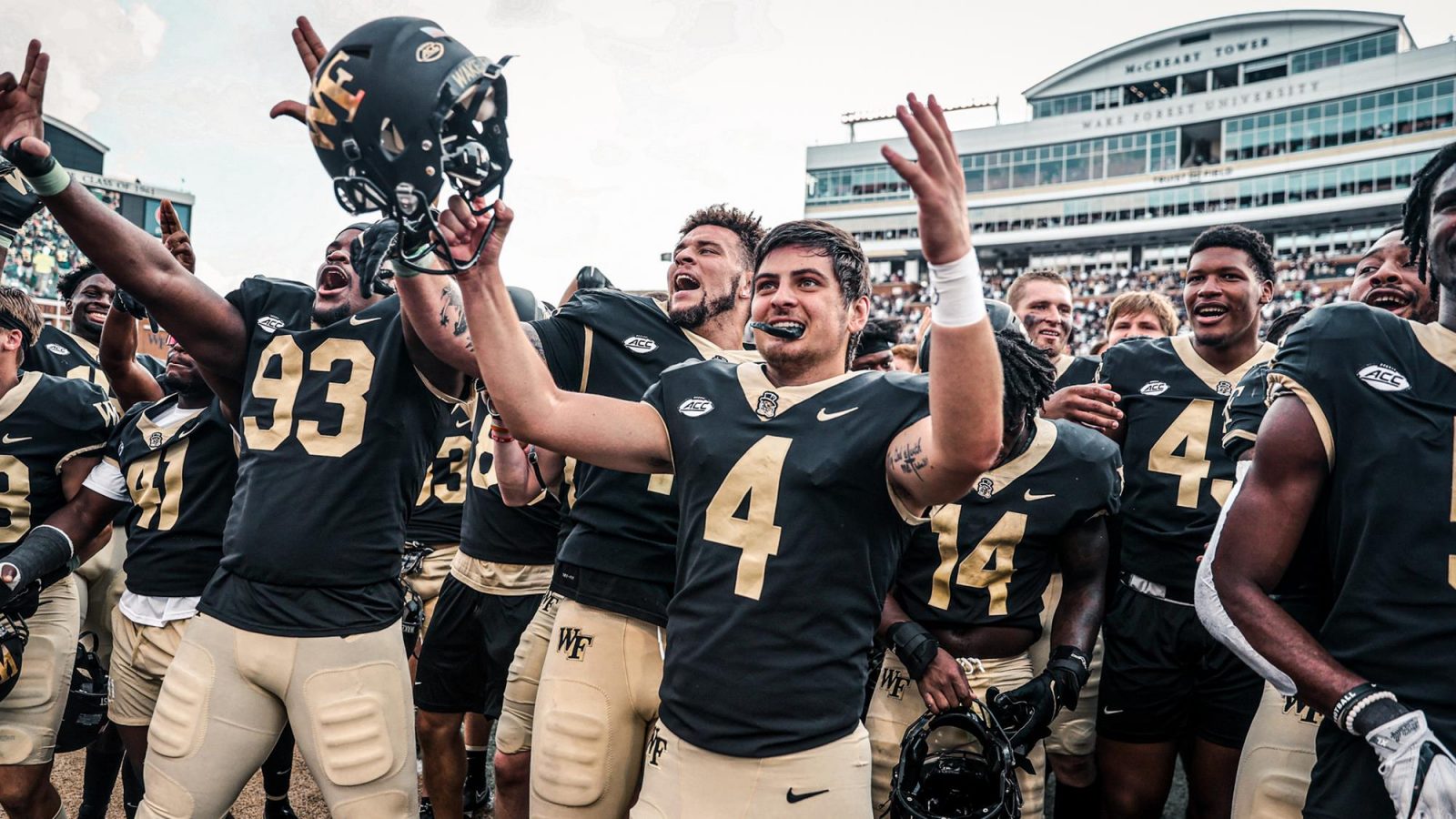 Prior to the start of the 2021 College Football season, we made 25 26 predictions for the season. Those predictions can be found here but we will also list them below and then review how each prediction turned out.

24. (MAC) Toledo’s Defense Will Give Up the Fewest Points Per Game – This was a close prediction but it was the correct one. Toledo gave up 283 points the entire season, which was the only MAC team to allow under 300 points on defense with Miami (OH) being the next best at 300 points surrendered.

23. (C-USA) Western Kentucky Will Average At Least 40 Points Per Game on Offense – We were confident that Western Kentucky’s offense would take a giant step forward with the numerous additions and they sure did. The Hilltoppers averaged 44 points per game en route to a C-USA title game appearance just a season after putting up only 19 per game.

22. (C-USA) UAB Will Win C-USA Championship – Our first incorrect prediction was one we thought was a gimme. The Blazers were favored to win the conference but couldn’t get past UTSA, who won their first conference championship in school history.

21. (Independents) Connecticut, Massachusetts, and New Mexico State Will Win Fewer Than 10 Games Combined in 2021 – Even this prediction set at 10 wins was optimistic as NMSU, UConn, and UMass won a total of 4 games combined. It was a rough display by these 3 schools but perhaps better days lie ahead.

Result: 4 of our 5 predictions were correct.

20. (Mountain West) Hawaii Will Win at Least 8 Games – This prediction was incorrect as Hawaii finished at 6-7 during an up and down season. Hawaii couldn’t string together more than 2 wins as they finished tied for 4th in the MWC West. They were selected to stay at home for the Hawaii Bowl but the game was canceled.

19. (Mountain West) Wyoming Will Win the Mountain West Championship – This was a rough prediction as Wyoming started 0-4 in the MWC and never stood a chance of reaching the MWC title game.

18. (Sun Belt) Appalachian State, Coastal Carolina, and Louisiana Will at Least 30 Games Combined – This one was spot on as these 3 schools were clearly the class of the Sun Belt. All three won at least 10 games and Louisiana went 13-1 in its best season in school history.

17. (AAC) East Carolina Will Make a Bowl Game – This was a close one as ECU sat at 3-4 in late October but ultimately was correct. 4 straight wins including two close road wins against Memphis and Navy sealed a winning season for East Carolina. ECU made a bowl game but didn’t get to play in it as the Military Bowl against Boston College was canceled.

16. (AAC) SMU Will Play In the AAC Championship Game – SMU started the season 7-0 overall and 3-0 in the AAC. Then the wheels came off as they finished with a 1-4 record the last 5 games with 3 losses by a touchdown or less. Maybe 2022 is the year SMU makes the AAC title game?

Result: 2 of these 5 were correct. The running total is 6 correct predictions of 10.

15. (Big 12) Iowa State Will Win the Big 12 Championship – This one wasn’t close as Iowa State never looked like a team that had improved from the 2020 season. We’ll temper our expectations around this ISU program in the future.

14. (Big 12) Kansas Will Have the Worst Offense and Defense (Measured by Points Per Game) – Kansas looked terrible the first half of the season. The offense was anemic and the defense was non-existent. Then came the OU game in which the Jayhawks hung tough and of course the epic win against Texas. The prediction was correct but Kansas looked like a different team in the last 3-4 games of the season.

13. (Big 12) Texas Tech Will Finish With a Winning Record – We needed the bowl game for this prediction to come true and the Red Raiders didn’t disappoint. Texas Tech walloped Mississippi State 34-7 to finish 7-6 and this was during a season when TTU had a coaching change midway through its campaign.

12. (Pac-12) California Will Reach a Bowl Game – We gave up on this prediction after the Bears started 1-5. They had a good finish to the season going 4-2 but missed bowl eligibility by a single win (looking at the Arizona game they lost 10-3). This one was wrong.

11. (Pac-12) UCLA Will Having a Losing Record – Speaking of bad predictions, here’s another one. UCLA was up and down sitting at 5-4 in early November but they won the final 3 to put this prediction in the L column.

10. (Pac-12) Utah Will Win the Pac-12 – This prediction looked rough after 3 games. Utah was inconsistent on both sides of the ball but then they found their groove after the San Diego State loss when Cam Rising took over as QB. They won 3 in a row before a loss to Oregon State. After that? they looked even better including two thrashings of Oregon including one in the Pac-12 title game.

9. (ACC) Boston College Will Reach 8 Wins – This prediction looked so good after September despite losing quarterback Phil Jurkovec. His injury probably cost them a win or two as the Eagles finished at 6-6 on the regular season. Don’t be surprised if we repeat this prediction in 2022.

8. Virginia Tech Will Make a Bowl Game – The Hokies did make a bowl game this year but they weren’t a good team. They started 3-1 and even played a close game versus Notre Dame. However, they needed a final game victory over in-state rival Virginia to get to 6-6. It still counts even if it wasn’t pretty.

7. Wake Forest Will Have a Top 3 Offense in the ACC – We had high hopes for Wake Forest in 2021 and they delivered. They started 8-0 before a tough 58-55 loss at North Carolina. Still, the offense was incredibly consistent all year as they went to the ACC Championship game before losing to Pitt. The Deacs finished with the 2nd best offense in the ACC at 574 total points just behind the 580 put up by Pittsburgh.

6. (SEC) At Least 1 First-Year Head Coach Will Make a Bowl Game – We should have been bolder with this prediction as 3 of the 4 first-year head coaches made a bowl game. Only Clark Lea at Vanderbilt didn’t reach a bowl game.

Result: 4 of these 5 predictions were correct. The running total is 12 correct out of 20.

Predictions 5 Through 1 (Plus Bonus Prediction)

5. (SEC) Ole Miss Will Have the Highest Scoring Offense – This prediction was blown apart when Alabama, Georgia, and Tennessee all put up points in droves. Ole Miss had a good offense in 2021 but not like the three aforementioned teams.

4. (SEC) Missouri Will Reach 9 Wins – This was another bold prediction that was wrong. I’m not sure this one ever looked realistically feasible as the season went on. Back to the drawing board on figuring out Mizzou.

3. (Big 10) Rutgers Will Make a Bowl – Of all the ridiculous ways to be correct on this prediction, Texas A&M withdrawing from the Gator Bowl wasn’t one we expected. This is a cheap way to claim a W and we would have rather seen TAMU play Wake Forest if we’re being objective. Nevertheless, Rutgers stepping in gives us another correct – if undeserved – prediction.

2. (Big 10) Northwestern Will Win at Least 7 Games – When we were writing up our predictions, this is one we went back and forth on. We knew the signs were pointing down for the Wildcats after a big 2020 but we ignored them even when the injuries piled up in pre-season. Northwestern had a terrible year going 3-9 overall and a solitary Big 10 win over Rutgers.

1. (Big 10) Wisconsin Will Win the Big 10 – Despite the horrendous 1-3 start to the season, the Badgers had the inside track on the Big 10 west title going into the season finale against Minnesota. Alas, the Badgers couldn’t get the job done and Iowa went on to lose the Big 10 title game to Michigan.

Bonus: FCS Teams Will Win at Least 8 Games Versus FBS Teams – The FCS had a banner year against FBS teams posting 12 wins, which was the most since 2013 when they won 15 games. It will be interesting to see how the 2022 season unfolds as the FCS players won’t have the super seniors they had in 2021 (and neither will the FBS teams).

Result: 2 of these 6 predictions were correct.