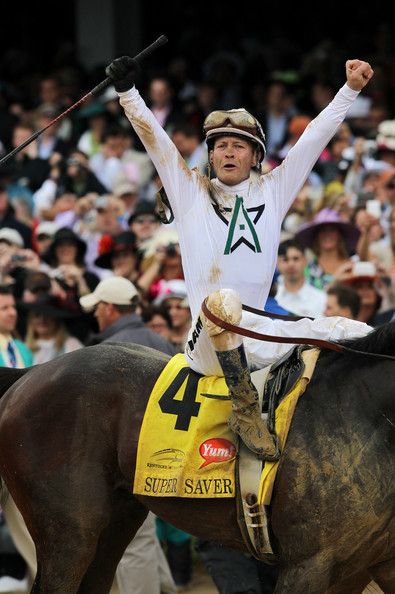 There was only one workout for Kentucky Derby hopefuls on Monday and that came from Bold Conquest. He worked five furlongs in 1:02.60 over a good track that was drying out from rain.

International Star galloped a mile and a quarter at the Trackside Training Center. Mubtaahij, currently stabled at Arlington Park, went two laps over the polytrack with Umgiyo.

On Sunday afternoon, jockey Calvin Borel was named as the jockey for El Kabeir in the Kentucky Derby on May 2.

Borel will replace C.C. Lopez who had ridden the 3 year old son of Scat Daddy in the previous four races. During that stretch, El Kabeir won the Grade 3 Jerome Stakes and the Grade 3 Gotham Stakes while finishing second in the Grade 3 Withers and third in the Grade 1 Wood Memorial.

Borel has ridden El Kabeir before in the Grade 2 Kentucky Jockey Club at Churchill Downs last fall. Borel guided the colt to a victory in that race in gate-to-wire fashion.

El Kabeir worked on Sunday at Belmont Park covering five furlongs in 1:00.18, which was third best of 19 workouts at the distance.

According to trainer John Terranova, El Kabeir will probably work at Belmont on Sunday, April 26, before shipping to Kentucky later that evening.

Franco was aboard Tencendur in his second start, a 3/4 length win against New York Bred maidens. That was the only time Franco rode him and the only win Tencendur has to his credit.

Tencendur went on to finish second by 2 lengths in the Grade 1 Wood Memorial behind Frosted to earn his spot in the Kentucky Derby starting gate.

Franco is currently second at the current Aqueduct meeting in the jockey’s standings after finishing third during Aqueduct’s winter meeting.

For as much attention as the Kentucky Derby and Kentucky Oaks contenders get, there will also be some excellent racing on the undercard for both of those races. On Monday, two potential starters worked out at Churchill Downs.

Judy The Beauty worked six furlongs going the distance in 1:12.60 with fellow stable mate Puppy Manners. She won the Grade 1 Breeders’ Cup Filly & Mare Sprint by head over Better Lucky last year. Trainer Wesley Ward later confirmed that she would be pointed to the Grade 1 Humana Distaff on Derby day.

Also working out on Monday morning was Hoppertunity, who scratched prior the 2014 Kentucky Derby due to a foot injury. He went four furlongs in :48.40 and is nominated to the Grade 2 Alysheba Stakes on Kentucky Oaks day (Friday, May 1).

There was not much in the way of workouts for possible Kentucky Oaks starters. Only four horses galloped on Monday morning.

Forever Unbridled went a mile and a half for her gallop as did Puca. Forever Unbridled will probably work on Friday. Puca’s trainer, Bill Mott, said Junior Alvarado would have the mount for the Oaks. Mott said she is likely to breeze on Saturday.

Maybellene also galloped over the track with a scheduled workout possible on Tuesday. Both Luminance and Oceanwave just jogged around the track on Monday morning. Oceanwave is expected to work on Thursday.

The link here provides the probable horses and possible entrants for each stakes race on Oaks and Derby Day.