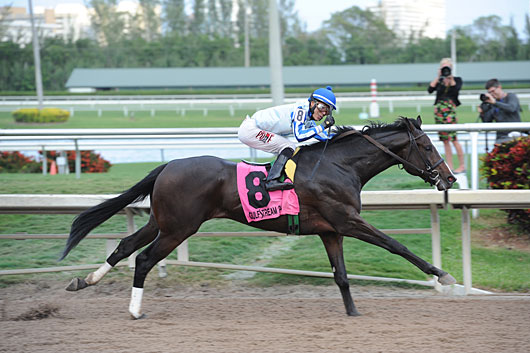 On Monday afternoon it was revealed that WinStar Farm has bought a minority share of Upstart from owner Ralph Evans. He will remain with trainer Rick Violette Jr.

“Upstart has been on our radar since the Breeders’ Cup,” said WinStar president Elliott Walden in a release. “Jerry Brown of Thoro-Graph approached me because he really believes this colt has a big future. We are honored to be partners with such a nice man as Ralph Evans on such an exciting young horse as Upstart.”

Upstart has been ultra consistent since his debut at Saratoga on August 15, 2014. He won his first two races before finishing second in the Grade 1 Champagne Stakes and then third in the Grade 1 Breeders’ Cup Juvenile to close out his two year old campaign.

There were three rider confirmations made on Monday. The first was that John Velazquez will be riding Carpe Diem in the Derby. That leaves Javier Castellano as the rider for Materiality.

Velazquez has ridden Carpe Diem in all five of his starts, guiding him to four wins and a second place finish. Velazquez also rode Materiality in all three of his starts, which were all victories.

In addition, Mike Smith was confirmed as the rider of Far Right in the Derby. Smith has ridden Far Right in each of the last three races, which has been very good for the connections. In those three races, Far Right has two wins and a second place finish.

It was another slow day for works, but one did take place at Arlington Park for the Dubai shipper Mubtaahij. He went three furlongs in 36.20 over the polytrack.

Going for trainer Mike de Kock, Mubtaahij went a mile around the track before going into his work. He will be shipped from Arlington to Churchill Downs on Monday.

Madefromlucky was vanned over to Churchill Downs from Keeneland on Monday morning with Materiality, Itsaknockout, and Stanford all arriving later on Tuesday at Churchill Downs. All four are trained by Todd Pletcher.

Mr. Z is scheduled to workout on Wednesday morning.

Baffert was on hand to see his filly Maybellene workout, but two of his other horses worked in company. Those two were Callback and Lord Nelson who went four furlongs in a quick 46.80. The internal fractions were :23, :46.80, and a gallop out in 1:14.60 for six furlongs.