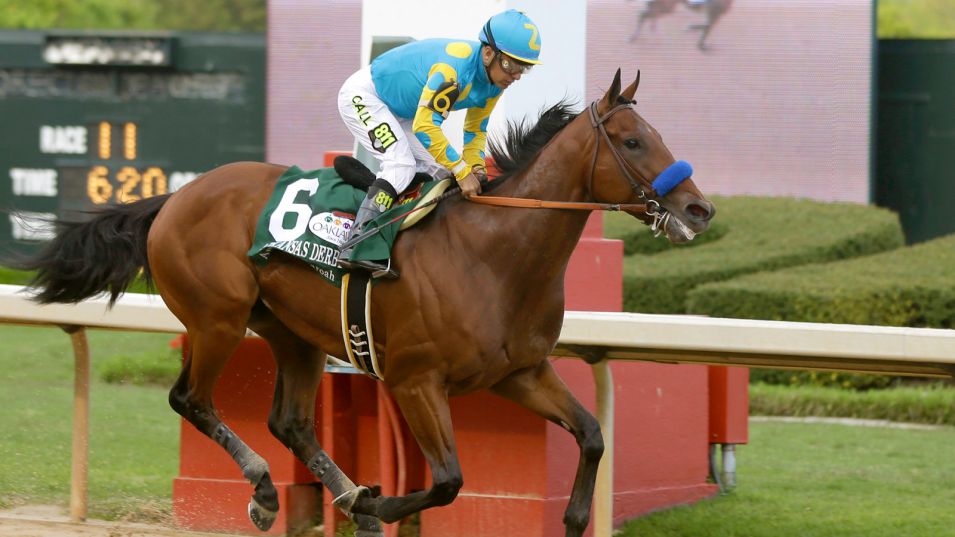 It was another dominant performance by American Pharoah at Oaklawn Park. He did not have the lead this time, but it was of little consequence on his way to an 8 length win over Far Right.

Longshot Bridget’s Big Luvy went straight to the lead with American Pharoah breaking well, but relegated back to second. Mr. Z was third, Madefromlucky was in a good spot fourth, and The Truth or Else sat fifth. Win The Space was sixth early on, Bold Conquest was seventh, and the late running Far Right was last of 8 more than 13 lengths behind the leader.

Bridget’s Big Luvy continued to lead on the backstretch and into the far turn with Pharoah still in second. The Truth or Else made a bid up the rail to move into the third while Mr. Z was in fourth. Win The Space was fifth and Madefromlucky was asked to make his move from sixth entering the far turn. Far Right was up to seventh and Bold Conquest was back in last.

On the far turn, American Pharoah engulfed the leader and took over with Mr. Z making his move right behind him. At this point, it was only a matter of how far American Pharoah would win by as he was under a hand ride throughout the running.

A mad dash for second place went to Far Right who came from way out of it to grab second over Mr. Z in third and Madefromlucky in fourth. Bold Conquest finished fifth, Win The Space was sixth, The Truth or Else was seventh, and Bridget’s Big Luvy was last of eight.

The entire race can be found here via Equibase.

American Pharoah is by Pioneerof The Nile out of the Yankee Gentleman mare Littleprincessemma. He was ridden by Victor Espinoza and is trained by Bob Baffert. He completed the one mile and one eighth in 1:48.52. He paid $2.20 to win, $2.20 to place, and $2.10 to show.