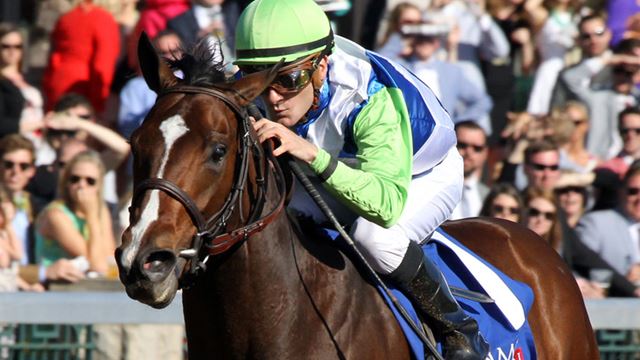 Needing a victory to have a chance to make the Kentucky Derby field, Divining Rod delivered under a perfect ride by Julien Leparoux. He won by 3 lengths over the favorite Donworth.

Out of the gate, Fame and Power went to the lead with Henry Jones and Divining Rod a length and a half behind. Donworth was also close in fourth. Tiznow R J was fifth, Quimet was sixth, and Comfort was settled in last by 5 1/4 lengths.

On the first turn Donworth was three wide and pushed to go up and sit of Fame and Power’s right flank. Divining Rod continued to sit in a perfect spot behind the leaders on the fence with Henry Jones next to him. Tiznow R J was fifth, Quimet was sixth, and Comfort was still last, but beginning to make a move to get closer to the field.

Comfort rallied to be fourth, but was no threat to the top three. Henry Jones finished fifth, Tiznow R J was sixth, and Quimet finished last of 7. The entire chart can be found here via Equibase.

Divining Rod has a chance to make the Kentucky Derby field with his total of 20 points though he is unlikely to enter the Derby.

“No, I don’t think so,” owner Roy Jackson said after the race. The draw for the Kentucky Derby will take place on April 29.

The Road to the Kentucky Derby has now concluded with the completion of the Grade 3 Lexington Stakes and the Grade 1 Arkansas Derby.